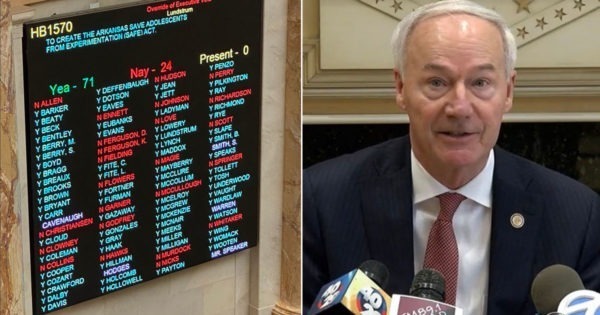 The Arkansas House of Representatives voted Tuesday by an overwhelming margin to override Governor Asa Hutchinson’s veto of a bill that would block the use of hormone treatments and puberty-halting drugs on young children.

Hutchinson had vetoed the Arkansas Save Adolescents From Experimentation (SAFE) Act on Monday, and implied it was immoral after an outrage campaign from left-wing activists.

The Arkansas House voted to override the veto by a margin of 71-24, defeating Hutchinson’s attempt to block the bill.

Left-wing activists appeared devastated by the news on Tuesday, with several expressing last-ditch hope that the SAFE act could somehow be overruled by a judge, though this outcome appears unlikely.

As National File reported Monday, Hutchinson had referred to the bill as a “product of the cultural war” that “while well-intended, is off course”:

Republican Governor Asa Hutchinson announced Monday that he has sided with far-left activists and chosen to veto HB 1570, which would ban the use of puberty blockers, hormone replacement procedures, and gender transition surgery on young children.

“I was told this week that the nation is looking at Arkansas because I have on my desk another bill passed by the general assembly that is a product of the cultural war,” Hutchinson said during a press conference. “I don’t shy away from the battle when it is necessary and defensible, but the most recent action of the general assembly, while well-intended, is off course and I must veto House Bill 1570.”

Arkansas has been the subject of an intense social media campaign by transgender activists to pressure Hutchinson into vetoing the bill.