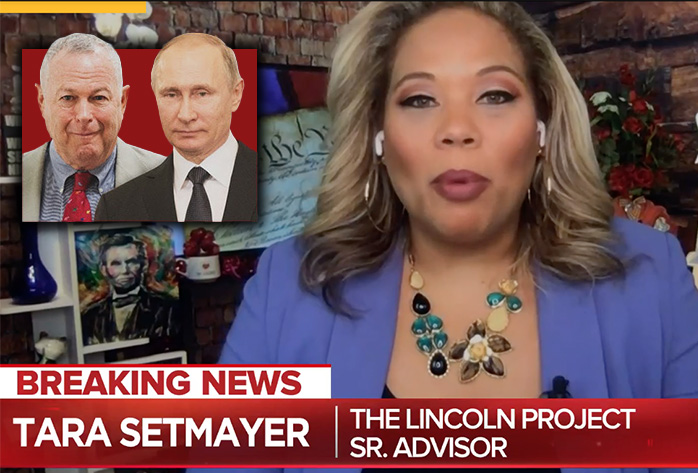 Earlier this year, the Lincoln Project announced it was building a database of former Trump administration employees to ensure they “will be held accountable” and “not allowed to pretend they were not involved.”

The super PAC’s obsession with accountability, however, did not prevent it from hiring Tara Setmayer, who previously worked for seven years as communications director for a Trump-supporting congressman with deep ties to Russia.

Setmayer, who joined the Lincoln Project as a senior adviser in February 2020, was recently tapped to chair a temporary “transition advisory committee” to oversee the work of external consultants conducting a “comprehensive review” of the group’s “operations and culture.”

The Lincoln Project announced last month that the law firm Paul Hastings would review the organization’s conduct as it relates to cofounder John Weaver’s predatory interactions with dozens of young men. The law firm’s ability to conduct an impartial review has already been undermined by the fact that several of its senior partners are Lincoln Project donors.

Before joining the Lincoln Project, Setmayer worked in the office of Rep. Dana Rohrabacher (R., Calif.) from 2006 to 2013. An avid supporter of Donald Trump, the congressman has been described as “Putin’s favorite.” Setmayer claims she left Rohrabacher’s office (to go work for Glenn Beck) before the congressman “began taking untenable Russia positions,” but that’s debatable.

Rohrabacher earned his reputation as a Putin apologist long before Trump announced his campaign for president. His pro-Russian bonafides were well established by the time Setmayer began working in his office and became increasingly more pronounced during her tenure.

Rohrabacher claims to have met Vladimir Putin in the early 1990s in Washington, D.C., where he played touch football with the former KGB agent and his bodyguards and lost an arm-wrestling match with Putin at an Irish pub. “His muscles are just unbelievable,” the congressman said in a 2013 interview about his support for Russia’s role in the Syrian civil war. Russia has since been accused of helping the Syrian government cover up chemical weapons attacks on civilians.

In 2008, Rohrabacher defended Russia’s military intervention in Georgia, citing anonymous intelligence sources to argue that Russia had acted in self-defense. “The Russians were right; we’re wrong,” he said during a House Foreign Affairs Committee hearing. “The Georgians started it; the Russians ended it.”

In 2012, FBI agents met with Rohrabacher to warn him that his unusual affinity for Putin and frequent trips to Moscow made the congressman a ripe target for Russian spies, who were actively trying to recruit him. A congressman present at the meeting told the New York Times the goal was to remind “Dana that Russia is our adversary.”

The rise of Trump brought heightened scrutiny on Rohrabacher’s ties to Russia but did little to change the congressman’s behavior. Rohrabacher traveled to Moscow in April 2016, where he met with “a close confidant” of Putin’s and received a file of “sensitive” materials. He arranged meetings with lawmakers and Kremlin lobbyists seeking the repeal of the Magnitsky Act, an anti-corruption law named after a Russian attorney who was murdered by Putin’s thugs.

Rohrabacher has acknowledged meeting with WikiLeaks founder Julian Assange in August 2017. The congressman reportedly told Assange he would secure a pardon from Trump in exchange for proof that Russia was not the source of leaked Democratic National Committee emails published by WikiLeaks. Rohrabacher told Yahoo News he was seeking evidence that Seth Rich, a former DNC staffer who was murdered in 2016 in what police believe to be a botched robbery, was responsible for the leak.

Rick Wilson, one of the Lincoln Project’s only remaining cofounders, has repeatedly attacked Rohrabacher over the course of his ongoing struggle with social media addiction. “Comrade Dana! How goes the Five Year Beet Harvest Plan?” Wilson tweeted, epically, in response to a photo of Rohrabacher’s appearance on Sean Hannity’s show. He has insinuated the congressman is a Russian spy.

Setmayer did not return a request for comment on whether she has been held sufficiently “accountable” for her multiyear affiliation with America’s foremost Putin stooge.