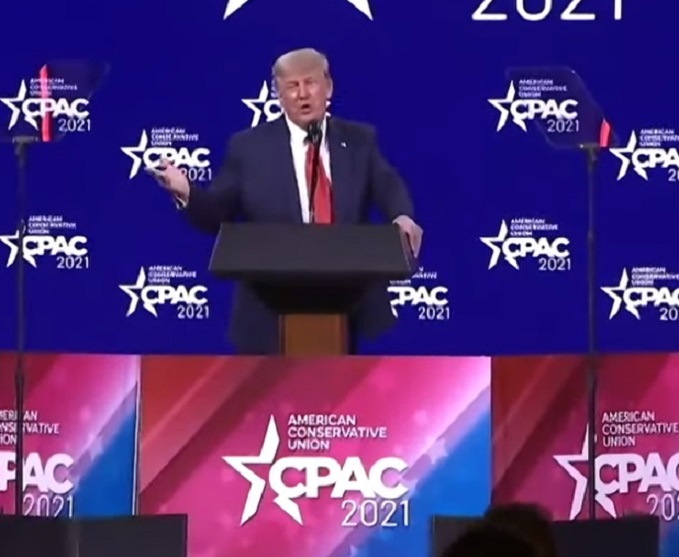 Predictably, MSNBC and CNN did not televise the president’s speech, as part of their ongoing efforts to prevent conservatives from talking to anyone other than ourselves.  If you missed Trump’s speech, you can watch it here.

It is not traditional for a former president to speak up so soon after leaving office.  But while Obama may not have been vocal, he was working feverishly behind the scenes in the early weeks of Trump’s presidency to bring him down.

Meanwhile, a lot of damage has been done in five weeks, and Trump laid it all out.

A nation that was fighting the cultural left is now led by a president who amplifies the left’s message.  Often when Biden talks about America, he says we have never lived up to our founding values.

But to the delight of the CPAC crowd, Donald Trump gave a full-throated defense of America and our founding heroes.

He zeroed in on the importance of conservatives fighting at the state level to clean up election laws, such as returning to an Election Day, instead of an election month.  We need voter ID laws, along with citizenship and signature verification.

By the way, all the bad things that Biden has already done and will continue to do rest squarely on the back of the Never Trump crowd, which is led by a number of neo-cons and financed by Hollywood and the left.  They own the disaster that is the Biden/Harris/Sanders agenda.  Thanks for nothing!

To School or Not to School

Donald Trump once again did what Joe Biden refuses to do.  He demanded that schools all across America follow the science and open up now.  But Trump noted that Biden won’t do that because he is controlled by the teachers’ unions, and it’s harming our children.

Trump added that the Biden Administration “is actually bragging about the classroom education they are providing to migrant children on the border,” while it refuses to open the schools so your children can get an education.

He also said that illegal aliens are walking across the border more easily than Americans can walk into restaurants.  (Two lines the president may have read in this daily report in recent weeks.) The views here are those of the author and not necessarily Daily Surge