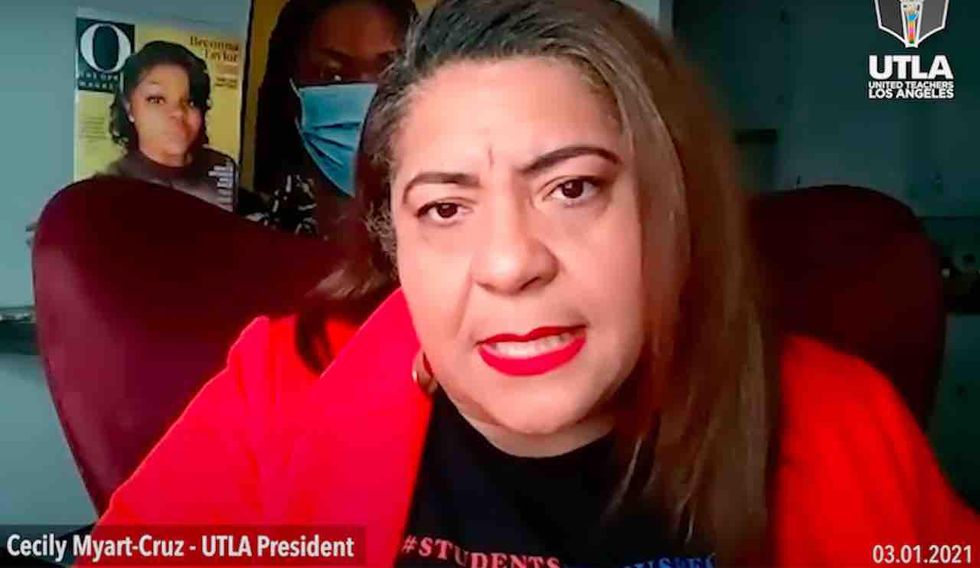 The president of the United Teachers of Los Angeles blasted California’s school reopening plan Monday, characterizing an element of it as “a recipe for propagating structural racism” — and also called out “white, wealthy parents” for “driving the push” to reopen schools too soon.

More from the outlet:

The much anticipated school reopening plan finalized over the weekend does not require schools to open but instead offers $2 billion in financial incentives for those that open before April 1. The proposal offers grants to schools that open transitional kindergarten through second grade by the end of March, as well as at-risk students in all grades. That includes districts in counties that are still in the state’s purple tier, with infection rates higher than what teachers unions have said are too unsafe for reopening.

Myrat-Cruz pushed back hard on the money aspect, saying lower-income communities will suffer because they already have higher infection rates.

“If you condition funding on the reopening of schools, that money will only go to white and wealthier schools that do not have the transmission rates that low-income black and brown communities do,” she said. “This is a recipe for propagating structural racism, and it is deeply unfair to the students we serve.”

Los Angeles Unified is the second largest district in America with about 600,000 students, Politico said, adding that it’s by far the largest in the state with roughly 10 percent of California’s public schoolchildren.

“We are being unfairly targeted by people who are not experiencing this disease in the same ways as students and families are in our communities. If this was a rich person’s disease, we would’ve seen a very different response. We would not have the high rate of infections and deaths,” Myart-Cruz said. “Now educators are asked instead to sacrifice ourselves, the safety of our students, and the safety of our schools.”

She said the union wants staff fully vaccinated from COVID-19 or be provided full access to vaccinations before schools reopen.

Myart-Cruz also said “some voices are being allowed to speak louder than others. We have to call out the privilege behind the largely white, wealthy parents driving the push for a rushed return.”

Newsom’s push to get shots into the arms of teachers, along with steadily decreasing case rates across the state, has more and more districts moving up their timelines to reopen. California began Monday to designate 10 percent of the state’s vaccine doses for teachers and other on-site school staff, speeding up distribution across counties. […]

While the plan offers extra funding to schools willing to reopen to the state’s youngest students regardless of local virus case rates, it does not apply pressure on older grades until counties hit the less restrictive red tier. Under the plan, once counties move into the red tier — with daily case rates below 7 per 100,000 residents — schools eligible for the grant funding must open to all elementary grades, plus at least one grade in middle and high school.

The deal speeds up the clock and more strictly ties the grants to in-person instruction than what the Legislature proposed previously. If schools do not open by the end of March, they will start to lose a percentage of money for each day they remain closed starting April 1.

The outlet said Los Angeles Unified Superintendent Austin Beutner didn’t respond Monday to a request for comment on the state’s plan, adding that he’s criticized earlier versions of the state’s reopening plan and has “mostly aligned himself with the union’s positions in recent months.”