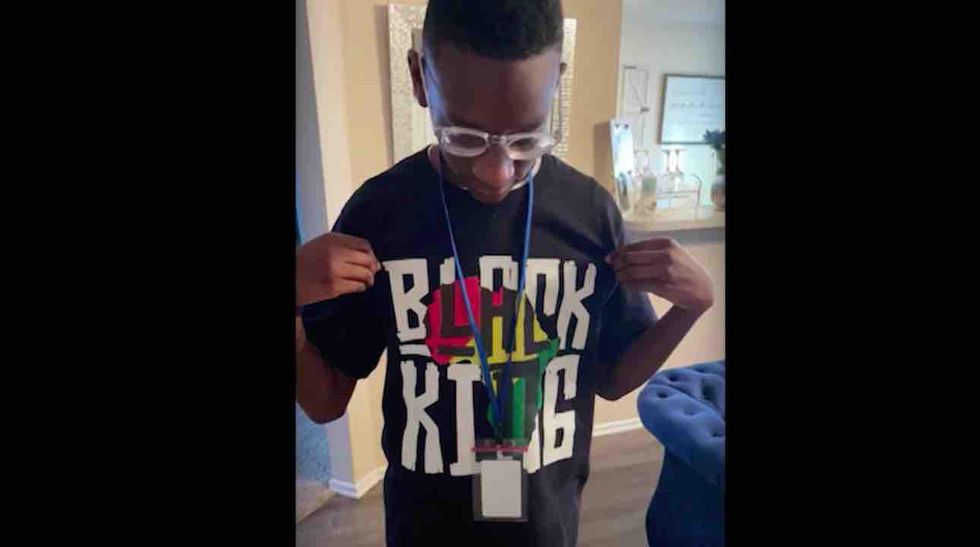 An Oklahoma middle school teacher is on paid administrative leave after allegedly calling a 13-year-old student’s “Black King” T-shirt racist and saying there should be a white history month,
KFOR-TV reported.

Latrell Taft told the station his shirt — which also shows an image of the African continent — was a birthday present and that he was excited to wear it to Heartland Middle School last Tuesday.

But the 7th grader said during science class his teacher asked him what his shirt said.

“She said that if she had a shirt that said white queen it would have been racist,” Latrell added to KFOR. “Then after that, she said we need a white history month. I said black people don’t have enough recognition and we barely learn about black people in February at my school.”

He also said the majority of his class sided with the teacher, calling his shirt racist, the station reported.

“I was embarrassed,” Latrell recalled to KFOR.

His mother, Melisa Shirley, told the station she immediately called the school but initially was “brushed off.”

But KFOR said Edmond Public Schools released a statement a day later saying it’s investigating the incident, is in contact with the parent, and will take “appropriate and swift action” if it’s determined that the student was the “target of discrimination, bullying, or racism.”

The district’s statement added that it “has taken numerous steps to address discrimination in Edmond schools, including providing professional development for staff on the issue of unconscious bias and ensuring equity for all. The district administration is continuing to assess the need for more training and professional development in this important area,” the station said.

KFOR said in its broadcast that Latrell wants to return to school — but not if the teacher is still employed.

“I am proud of my blackness, and she will never take it away from me,” he told the station, adding that “I am a king because I think I’m a king” and that he’d tell his teacher that “black is beautiful.”

Several of his classmates have already reached out and apologized to him, the station noted.

Latrell’s mother added to KFOR that “there should not be educators like this. I think she should be reprimanded.” The station added in its broadcast that the mother was set to meet with the principal last Thursday morning and present a list a demands.

The school district then placed the teacher in question on paid administrative leave “pending a decision on disciplinary action” while it continues its investigation, KFOR noted.

Edmond Public Schools officials said they met with the teacher Thursday afternoon but couldn’t divulge details about the meeting’s outcome, the station reported.

“The district recognizes the public’s desire for a quick resolution to this issue. However, it’s important to note that employees have fundamental rights to ensure fairness when they are the subject of a complaint,” Susan Parks-Schlepp, the district’s director of communications, added in a statement to KFOR. “Those rights include an option for the teacher to respond to and contest any recommended disciplinary action.”