HIDIN’ BIDEN: Psaki Says Biden Still Has No Plans To Hold A Press Conference While In Office 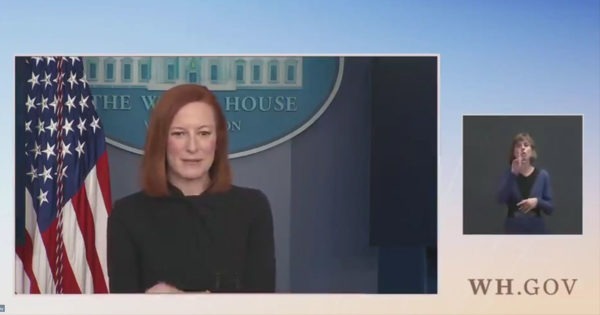 White House press secretary Jen Psaki confirmed Monday that unlike his predecessors, President Joe Biden will not be holding a live press conference in the near future, despite having been in office for over a month at this point.

When asked if Biden had scheduled his first press conference yet, Psaki replied, “Not yet, but we will definitely have one, we will schedule it, and you will be the first to know, because you’re pivotal participants in that.”

Biden’s Press Secretary Jen Psaki says that are still no plans for Biden to hold a press conference after over a month of being in office https://t.co/3toEuYK5Tl pic.twitter.com/n6dKvg2ZNy

Biden has still refused to hold a White House press conference despite being in office for over a month, preferring to let Psaki and Vice President Kamala Harris handle his media obligations as concern mounts over his mental state.

Psaki stated in February that Biden will also refrain from meeting with world leaders over the next few months, as Vice President Harris will be performing a majority of the administration’s international meetings over the phone.

White House Press Secretary Jen Psaki admitted today that Joe Biden will not be meeting with world leaders in-person for “a couple of months.”

This news comes after the revelation that Vice President Kamala Harris has assumed one of the traditional roles of the presidency, and has begun taking Head of State calls with foreign leaders on behalf of the President.

“It will be a couple of months before the President has an in-person or invites a foreign leader to meet in person here at the White House,” said Psaki during a White House press conference.

During a recent town hall on CNN with pre-screened questions, Biden said, “Everybody knows I like kids better than people.”