March 1, 2021 Constitutional Nobody US News

TAMPA – (HCSO) – The Hillsborough County Sheriff’s Office has arrested a young man linked to a series of violent crimes over the course of several weeks. Jerome James Knight, 19, is facing charges of First Degree Murder with a Firearm, Robbery with a Firearm, Shooting into a Vehicle and Aggravated Assault with a Deadly Weapon.

Detectives first responded to a homicide just before midnight on December 22, 2020, at the Progress Village Recreational Center. A citizen spotted a suspicious vehicle in the parking lot at 8701 Progress Blvd. When deputies arrived, they discovered a deceased male inside the vehicle. The victim appeared to suffer from upper body trauma.

Less than a month later, at 8:05 p.m. on January 19, 2021, deputies were called to the Circle K gas station located at 11606 Balm Riverview Road for a shooting. The victim in this case became involved in a verbal altercation with an unknown black male while inside the store. The altercation turned physical as both subjects exited the store. The suspect retrieved a firearm from his vehicle and shot one round into the front passenger side window of the victim’s vehicle. The vehicle was occupied by the victim’s two juvenile children at the time of the shooting. No one was injured.

As detectives investigated this incident, two days later on January 21, 2021, detectives responded to a double homicide on the 100 block of Pelican Creek Circle in Riverview. Just after midnight, deputies discovered two deceased victims outside of a business who appeared to suffer from upper body trauma.

While the Circle K incident appears to be a random act of violence, detectives believe all three murders occurred during drug deals where the victims were killed during the exchange.

Detectives were ultimately able to link Jerome Knight to all of these incidents, and arrest warrants were issued for Knight for three counts of Aggravated Assault with a Deadly Weapon and Shooting into a Vehicle for the Circle K incident, and later, three additional counts of First Degree Murder with a Firearm, Robbery with a Firearm and Shooting into a Vehicle for the Progress Village and Riverview murders. 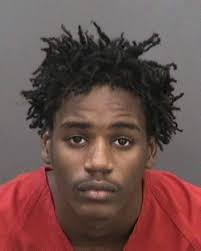 On February 6, 2021, Knight was located and arrested by the Romulus Police Department in Romulus, Michigan for the active warrant of Aggravated Assault and Shooting into a Vehicle.

On March 1, 2021, Knight was transported back to Hillsborough County and booked into the Orient Road Jail. Detectives have conducted an interview with Knight regarding the incidents.

“Despite Jerome Knight’s attempts to flee rather than face the consequences for his violent crimes, our detectives were able to find him and bring him to justice with the help of additional law enforcement agencies,” said Sheriff Chad Chronister. “As his actions have shown, this is a very violent individual.”