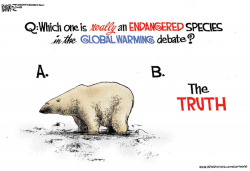 During the presidential campaign, the few times that Joe Biden came out and spoke to the huge crowds of 10 to 25 people awaiting his words of wisdom, he often spoke of the “existential threat of climate change.” He finally got the memo that the other democrats, including the ones with bylines, had been quoting for some time.

Miriam-Webster defines existential as “grounded in existence or the experience of existence.” One can conclude from the definition that anyone who makes the above claim believes that anthropogenic global warming threatens the existence of everyone living on the planet – and carbon dioxide is to blame.

The cure touted by the president is renewable energy, mainly wind and solar power. The threat and cure are so important they have prompted four new Executive Orders that will negatively impact the lives of Americans and require spending lots of your tax money.

There is not enough space in this forum to review all the facts and scientific data that put the lie to the threat of carbon dioxide to our existence, but here are a few I will offer.

Carbon dioxide is present in the atmosphere currently at a level of 400 parts per million (ppm), an increase from 350 ppm in 1988. James Hansen of NASA indicated at the time that 350 ppm was probably the safe level of CO2. So, it is long past time to act and keep the planet from burning up.

However, CO2 is not an efficient greenhouse gas. Water vapor holds that title. Is there a presidential commission to study reducing man made water vapor in the future?

CO2 is plant food and is responsible for the increased greening of the world as shown by a comparison of past and present satellite images. Commercial greenhouses pump the stuff into their buildings to improve plant growth.

While this deadly gas was increasing its levels in the atmosphere, global temperatures went into a roughly 20-year pause. Looking at a graph of temperatures over the years it is clear from the trend line the planet’s temperature has been flat during this time.

The world’s climate changes but we have had more years in ice ages than interglacial. There is documentation describing vineyards in Gloucestershire and Herefordshire in northern England during the Medieval Warming Period.

Climate alarmists have for decades pointed to their climate models as evidence that the global temperature is steadily increasing to dangerous levels. Yet, when comparing the numbers out of the models to actual satellite measured temperatures, not one of the 72 models has accurately forecast the temperature for 20 years or more. As the computer types say, “garbage in, garbage out.”

Alarmists says we must follow the science. I remember learning about the scientific method. You put forth a hypothesis, design an experiment to test it, gather data and analyze the results. If results don’t confirm the hypothesis, it is time to start over. So how exactly is using the erroneous output of models considered following the science?”

Scientists know that science is never really settled. Heck, I’m old enough to remember when Pluto was one of the nine planets! (see the International Astronomical Union, 2006)

Regarding the cure, any discussion on the practicality of a preferred energy source as a weapon against global warming should include the Four Imperatives, Power Density, Energy Density, Cost and Scale.

(Note: the data on Power Density is from the book, Power Hungry, by Robert Bryce, an expert who has studied the energy sector for decades.)

To get an idea of the difference in real estate requirements, Bryce uses one nuclear plant, the South Texas Project, as an example. Counting all 12,000 acres of the two-reactor plant yields a power density of 300 horsepower per acre or 56 watts per square meter. Compare that to wind power producing 6.4 horsepower/acre or 1.2 watts/square meter. The conclusion is wind power requires about 45 times as much land to produce a comparable amount of power as nuclear.

I won’t even go into the data on the number of birds, some on the endangered species list, hacked up by wind turbine blades or the complaints of people living near wind farms in Texas, Oregon, New York and Minnesota about noise and other problems, like sleep deprivation, due to the rumbling from turbines.

It is also important to note the power density figures for wind and solar don’t translate to a constant output. Solar doesn’t work in the dark and wind turbines don’t produce power when the wind isn’t blowing. So, during those periods the output measures 0 watts per square meter. In fact, turbines must be shut down if winds exceed a certain speed to protect the moving parts. Most important of all, when either of these is operating commercially, they require a backup source to keep the electricity flowing at night or when the wind is calm. That back up source is usually natural gas powered. So much for net zero emissions by any date.

The Existential Threat of Too Much Sunshine and the President’s Cure for It is original content from Conservative Daily News – Where Americans go for news, current events and commentary they can trust – Conservative News Website for U.S. News, Political Cartoons and more.

Click this link for the original source of this article.
Author: Dave Agusta