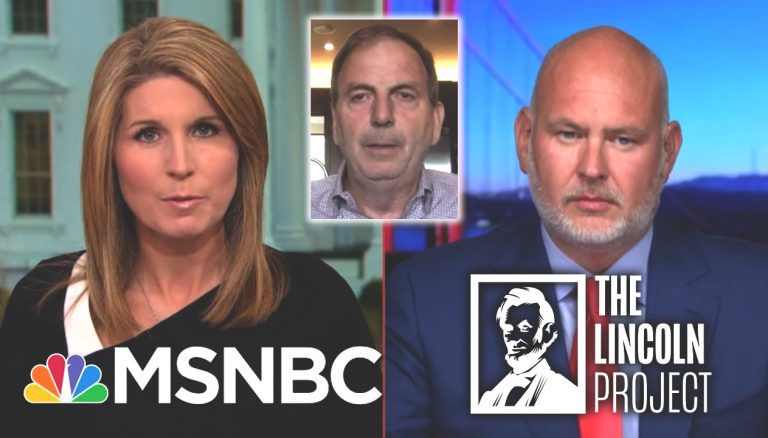 Allegations of inappropriate sexual behavior against Lincoln Project cofounder John Weaver were first reported in the American Conservative on Jan. 11. Since then, the embattled super PAC has received more than $32 million worth of free or “earned” media from cable outlets CNN and MSNBC, a Washington Free Beacon analysis found.

The Free Beacon analyzed 40 appearances—10 on CNN, 30 on MSNBC—by Lincoln Project founders and advisers between Jan. 11 and Feb. 11. The value of the earned media was calculated using the “National Publicity Value” of each appearance, as estimated by media monitoring service Critical Mention. The total value of earned media over the month-long period came out to $32,689,233.

The allegations against Weaver, and his subsequent exit from the Lincoln Project on Jan. 15, did little to alter the super PAC’s friendly relationship with CNN and MSNBC. After the scandal broke, Lincoln Project founders and advisers appeared on the cable networks 23 times before one of them (cofounder George Conway) was finally asked to weigh in on the situation.

The dynamic changed in early February, following the publication of a New York Times story based on interviews with 21 young men who said Weaver had sent them “unsolicited and sexually provocative messages online” and in some cases “offered professional and personal assistance in exchange for sex.”

The Times story compelled Lincoln Project leaders, after declining to comment on the allegations for weeks, to issue an extended statement denouncing their former colleague as “a predator, a liar, and an abuser,” while continuing to deny any knowledge of Weaver’s actions and threatening legal action against the group’s critics.

Subsequent reporting would cast doubt on those denials. Last week, for example, Amanda Becker of the 19th News reported that some Lincoln Project leaders knew of the allegations in March 2020, a detail that was confirmed by Sarah Lenti, the group’s managing partner and former executive director.

Even after the Times published its story, Lincoln Project associates continued to receive earned media from CNN and MSNBC, making 14 appearances on the cable networks in the first half of February. Only in recent days has the Lincoln Project’s media prominence subsided.

Schmidt, Wilson, and Reed Galen are all that remain of the Lincoln Project’s eight original cofounders. Many of the group’s other employees and unpaid associates have resigned, including former senior adviser Kurt Bardella, who recently suggested the super PAC be shut down.

The Lincoln Project appears determined to soldier on, even as Donald Trump’s glaring absence from the political scene makes it increasingly difficult to justify its existence. Schmidt reportedly viewed the super PAC as his ticket to “generational wealth,” and the group was well on its way to establishing a media empire until the Weaver scandal threw a wrench in the works.

The group recently hired the law firm Paul Hastings to conduct a “comprehensive review” of the Lincoln Project’s handling of the Weaver scandal, as well as its secretive and oft-criticized financial practices. Public confidence in the firm’s ability to conduct an impartial investigation was immediately undermined, however, by reports that several senior partners are Lincoln Project donors.

Whether or not the Lincoln Project is able to survive could ultimately be determined by the media’s willingness to forgive and forget. Is a mutual hatred of Trump enough to sustain the super PAC’s cozy relationship with the likes of CNN and MSNBC? That remains to be seen.