BONGINO: ‘I Have No Relationship With The New CEO’ Of Parler Who Wants Convention That May Let Soros Rewrite Constitution 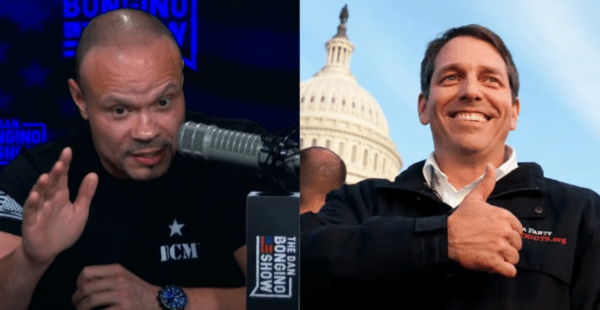 Responding to a National File report, co-owner of Parler Dan Bongino said he has “no relationship” with new CEO Mark Meckler who supports a constitutional convention that would potentially let George Soros rewrite the Constitution.

National File revealed on Sunday that the interim CEO of Parler, Mark Meckler, currently runs the Convention of States Project, a supposed “grassroots” organization pushing for a convention under Article V of the Constitution. As National File reported, Meckler is joined in his push for a convention by George Soros through his funding of leftist organizations, who could use the opportunity to run roughshod over the Constitution:

The New Republic noted in 2014 that “George Soros — the financier of global fascism — is pumping millions of dollars into the same Article V campaign that is being promoted by” top conservative voices, including Mark Levin.

Many fear the convention would lead to a Soros-sponsored gutting of current constitutional protections that include freedom of speech and religion, the right to privacy, and the right to bare arms.

Bongino, one of the co-owners of Parler, responded to National File’s reporting on his show on Monday night, in an attempt to “debunk” our reporting. Rather than doing so, Bongino revealed that he actually has “no relationship” with Meckler at all, despite ostensibly having a say in the decision to hire Meckler to run his company.

“I don’t know him, I have never met him in my life,” Bongino said about his relationship with Meckler, who serves as Bongino’s employee as the interim CEO of Parler.

The comments from Bongino may raise speculations about who has control over the direction of Parler following the firing of former CEO and co-founder John Matze. Press reports on the topic have claimed that Rebekah Mercer, the daughter of Republican mega donor Robert Mercer, and a founding investor of Parler, “increasingly pulls the strings at the company”:

She was fairly hands-off for the first two years of the company as it slowly established itself, the people familiar with Parler said… That changed last fall as Parler rapidly gained popularity and the election approached. Mercer, who also set up the board’s governing documents through lawyers, started asserting more board accountability and playing a larger role in company leadership…

It was Mercer who ultimately pushed the founding CEO out, Matze told several media outlets. “I feel like it was a stab in the back by somebody that I thought I knew,” he told Axios… Some thought it was a play by Mercer to harness more operational control of the company. Other influential voices in the company were also sidelined, two of the people familiar with Parler said.

Bongino falsely claimed that the story was a “hoax,” despite Meckler often bragging about his affiliation with the Convention of States project, heading the organization as its president, and the obvious ties between Soros and left wing organizations who have joined Meckler to push for the convention of states.