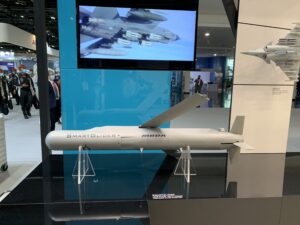 The SmartGlider missile at MBDA’s booth during IDEX 2021.

ABU DHABI: UAE’s Tawazun Economic Council and MBDA have signed agreements that may lead to the joint design and production of the SmartGlider weapon systems in the UAE, the company announced at IDEX.

“This partnership is very emblematic as we are really embracing the ambition of UAE and want to pursue our long-lasing cooperation through more local presence in the country,” Patrice Hajjar, MBDA’s export vice president for the Mideast, told Breaking Defense.

“We fully captured for some years now the necessity to be more local, and have clearly seen the trend for more cooperation and local partnerships in the region,” he added.

During the pre-development phase, the two entities will study several concepts before reaching a development phase with the intent of offering an optimal system at the right price and with the right performance, all while leveraging the capabilities of the UAE defense industry.

“We’ve seen huge progress in the UAE and we really want to leverage these great capabilities in order to develop something that meets the UAE armed forces requirements, but also the export market together with UAE partners,” he added.

A joint team of engineers from both sides will be in charge of development studies and will operate from MBDA’s first regional Missile Engineering Centre in the UAE. Engineers from MBDA are set to arrive in the third quarter of 2021.

“This is a unique preparation phase, a first that brings together engineers from MBDA and Tawazun in the same working station starting from a very early stage of the program development,” Hajjar told me. “We aim at promoting a cutting edge technology that will bring a bright future for sales and meet customers’ requirement including European customers.”

“These air-to-ground missiles are answering the needs of local air forces and coping with future air defense systems while bringing an incredible cutting-edge technology,” Hajjar added.

“We have been building this strategy slowly but surely,” he said. “Selling is no longer the expectation of our customer but instead working together locally to share technology and engage in a journey where we will sale to the export market.”

This is a step forward because, “we are starting from the very beginning in a long journey which will be very much profitable for the UAE economy, employment and ambition to really be in the game of defense industry,” he added.

To Tawazun, the agreement allows the company to extend and increase its areas of co-development and co-production of technologically advanced defense products.

“Collaborating with MBDA will reinforce our commitment to contributing to the development of defense and security industries in the UAE, to building national capabilities, and to supporting the growth of local supply chains,” Tareq Abdulraheem Al Hosani, CEO of Tawazun, said.