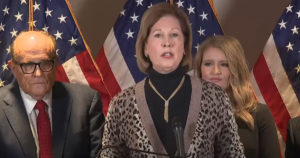 Top lawyer Sidney Powell says she and her allies “are NOT done” litigating the 2020 election, which she and many others say was stolen from President Donald Trump via a series of obvious and complex types of voter fraud, and insists that “irrefutable proof is coming soon.”

After the United States Supreme Court decided not to hear cases filed by the Trump campaign, saying that there was no standing to hear them before the 2020 election and that they were moot afterwords, Powell released a statement on her Telegram channel promising that the fight for election integrity would continue.

“There are still important live cases,” wrote Powell on her Telegram channel. “Irrefutable proof is coming soon. Keep educating everyone about the facts.”

“Today’s Supreme Court orders were disappointing but we are NOT done, and we will not let this fraud stand. #WeThePeople are supposed to run this country.”

Powell also announced her new Defending The Republic SuperPAC, which see says will “expose corruption in both parties and support people with the courage to protect our constitutional rights and the Rule of Law.”

Prior to the betrayal of President Trump by virtually all congressional Republicans on January 6, Powell released a 270-page report detailing what she alleges are instances of fraud and election meddling that occurred in the 2020 election. National File reported:

The document contains affidavits, sources, testimony, witnesses, and other evidence of mass voter fraud and foreign interference in the 2020 election.

“We conclude that the Dominion Voting System is intentionally and purposefully designed with inherent errors to create systematic election fraud and influence election results.”

“One in five components used in voting machines are from China-based companies.”

Powell has since been banned from all legacy big tech companies, and now posts most frequently to her Telegram channel.

In other news...
Potential Biden NASA Pick Invested in Chinese Telec...
Netanyahu: Children Under 16 Likely to Be Vaccinate...
ICYMI: College Student Gets Suspended for Saying ‘A...
BREAKING: Judge Demands Custody Of Voting Machines!
Supreme Court Pressed to Take Up Harvard Affirmativ...
The Lost Message of Purim: Jewish Unity
Visit our Discussion Forum at Libertati.com. Follow us: