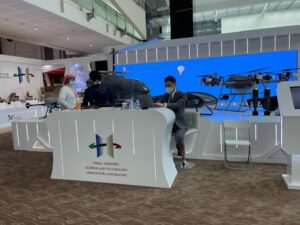 The China-Emirates Science and Technology Innovation Laboratory at IDEX 2021 in Abu Dhabi.

DUBAI: In the midst of all the intense activities at the International Defence Exhibition (IDEX) in Abu Dhabi — including the buzz generated by the first-ever presence of an Israeli pavilion — exhibitors and participants could not help but notice one big thing was missing: the high-level U.S. official delegations.

If anybody had any doubt that the U.S. relations with the United Arab Emirates (UAE) were going tough times after the Biden Administration suspended major arms sales, the recessive American presence at IDEX drove the point home unmistakably.

Neither the chief of U.S. Central Command (CENTCOM) nor any senior official from the Pentagon showed up to the opening ceremony of the first defense trade show held in the region since the start of the COVID-19 pandemic. This time CENTCOM was represented at the opening day by the commander of Navy Central and the deputy commander of Air Force Central.

“U.S. delegations used to be the biggest of all delegations that showed up at IDEX, which is hosted by one of the most important clients to the U.S. defense industry,” according to one of the show organizers, who asked not to be named.

None of the major U.S. defense companies exhibiting at IDEX accepted BD request to comment on the modest American representation. As a matter of fact, none of them would comment about any signed deals or prospects for future business with the UAE and Saudi Arabia.

“We are keeping a low profile as the other U.S. outlets,” said a marketing executive at one of the major U.S. defense companies, who did not want to be named. “None of us want to appear to be contradicting the U.S. State Department policy or moving ahead of it.”

Within a week of taking office, the Secretary of State Antony Blinken ordered a freeze on recent contracts signed in the last days of the outgoing Administration of Donald Trump with the UAE and Saudi Arabia. The UAE contract, which is now under review, was for the purchase of 50 F-35 JSF warplanes and 18 Reaper attack drones and munitions.

Although there was no official comment from the UAE, annoyance with the US was apparent on social media, where prominent academics and journalists and commentators tweeted expressing their disappointment and anger with President Joe Biden’s Administration.

“IDEX-2021 is an opportunity to seek new sources of arms away from the United States to bolster the future UAE defense and deterrence capabilities, like the Chinese J-20 that is a 5th generation fighter equal to that of the F-35,” tweeted Dr. Abdulkhaleq Abdullah, a UAE Political Science professor and a prominent columnist with over 240,000 followers.

“Suspicious and worrying signals and sometimes aggressive from President Biden Administration to Arab Gulf States. Are we still friends and allies to Washington?” Abdullah asked in another tweet. 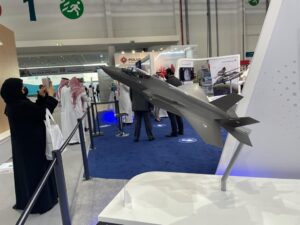 Both tweets were retweeted hundreds of times and generated wide reaction of support from followers.

UAE officials visited almost all IDEX exhibitors, but made lengthy stops at the Chinese and Russian pavilions that occupied very large areas of the show compared to the US companies.

“The UAE has plenty of options other than the US,” said one UAE official who asked not to be named. “It resorted to them before and will again if need be.”

After the United States refused in the past to sell the UAE and Saudi Arabia attack unmanned aerial vehicles (UAV), they both acquired the Wing Loong II and Rainbow attack UAVs from China.

The UAE enhanced its collaboration with China in the development of unmanned systems. The China-Emirates Science and Technology Innovation Laboratory had a big display of unmanned systems at the center of IDEX, with Arabic-speaking Chinese engineers standing by to answer questions.

Meanwhile, a large model of the F-35 with UAE Air Force colors stood at the entrance of the Lockheed Martin booth, denied the opportunity to celebrate what should have been a victory lap for winning a multi-billion-dollar contract.

“I really hope this whole thing will pass and the review will be over in the next few months and the deal will go through,” said a US industry official who asked not to be named. “Otherwise, the Israeli and Chinese companies will be very happy to fill the vacuum and provide what the U.S. would not sell.”

“If the deal goes through, the US will get a much-needed injection of cash, and will have a better-equipped military ally in the region, and if it doesn’t, the UAE will continue to be just fine and able to seek other sources,” the Emirati official added.

The Biden Administration tough stance vis-à-vis Saudi Arabia and the UAE has also been a cause of concern among some political circles and observers in the United States.

In a memo reflecting on the new Administration’s policies towards the Middle East and North Africa, the Washington Institute for Near East Policy called for a “more balanced approach (towards Saudi Arabia) that makes sense.”

The authors of the memo added that “while there is a role for punitive steps in response to outrageous actions, measures implemented out of appropriate context or imposed in a way to cause public embarrassment have the potential to trigger a backlash within the kingdom that could diminish U.S. influence, slow the pace of reform, or both.”

In other news...
The Passing of the Gatekeeper: Rush Limbaugh (1951-...
Federal Judge Appointed by Obama Blocks New South C...
Does France Want Their Statue Of Liberty Back?
RACISM — Always A One-Way Street
Was Rush Limbaugh Done with Conservatism?
The Republican Party May Be A Lost Cause
Visit our Discussion Forum at Libertati.com. Follow us: