Democratic Infighting Heats Up Over Agenda 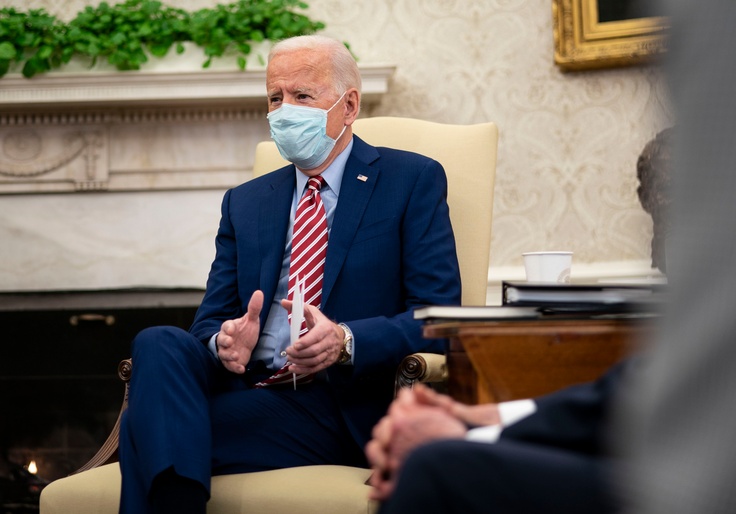 Infighting within the Democratic Party is threatening to stall the party’s ambitious policy agenda during President Joe Biden’s crucial early days in office, even as Democrats control both Congress and the executive branch.

Democrats in Washington are struggling to reach a consensus on immigration reform, student loan forgiveness, and a minimum wage increase—all key issues for progressives, and areas that Biden vowed to prioritize while campaigning.

On the minimum wage, Biden has veered left, backing a national $15 minimum. The party’s efforts to get legislation through Congress, however, could be tanked by red-state Democratic senators Kyrsten Sinema (Ariz.) and Joe Manchin (W.Va.).

The president also attempted to appease moderates by supporting a $10,000 limit on individual college debt relief—a move that angered progressives, who are demanding $50,000 debt cancellation.

And on immigration reform, Biden has found himself under fire from moderate Democrats, who claim he’s ignoring border security even as left-leaning activists insist that he halt all deportations of illegal immigrants, including those with criminal records.

This infighting is no longer behind the scenes but out in the open, causing optics problems for Democrats. On Monday, activist groups staged demonstrations outside the offices of Sinema and Manchin after the two lawmakers voiced objections to including a $15 minimum wage hike in the COVID relief legislation as part of budget reconciliation.

The demonstrations were led by the Poor People’s Campaign, the Service Employees International Union, the Communications Workers of America, and One Fair Wage, which described the minimum wage fight as “our economic Selma.” The groups also demonstrated outside Senate Majority Leader Chuck Schumer’s (D., N.Y.) office, signaling that they plan to hold him accountable for keeping Democrats in check and getting the legislation across the finish line.

“Democrats … ran on [the $15 minimum wage increase], they put it in their platform, they have said this is what needs to happen, it’s been pushed for years. And it would be an ultimate abandonment and betrayal to now get here and have the power to do it and then to retreat,” said Rev. William Barber, co-chair of the Poor People’s Campaign, in an online press conference last week.

Barber and other organizers signaled they were ready to go to war over the issue after they held an unfruitful meeting with Manchin’s office last Thursday.

“[Manchin’s] got his head in the clouds and he doesn’t understand what’s happening to poor people in West Virginia,” said West Virginia activist Brianna Griffith in a press conference after meeting with the senator.

Other activists promised there would be long-term repercussions for Democrats if they failed to get the policy passed.

“If Democrats can’t get $15 minimum wage and paid sick leave passed, they are horrible failures & they’ll be annihilated in 2022,” wrote Cenk Uygur, a prominent progressive and the host of The Young Turks, on Twitter on Friday. “These are the easiest things in the world. All of America, including Republican voters, agree. If you can’t win with complete control, you suck at your job.”

Last week, Biden also came under fire from the left after he said he wanted to limit student debt forgiveness to $10,000 per borrower, rather than the $50,000 debt relief supported by many Democrats in Congress.

His comments drew immediate backlash from progressives in Congress, including Rep. Alexandria Ocasio-Cortez (D., N.Y.), who blasted the president for “holding back.”

“Yes, [Biden] does have the authority to #CancelStudentDebt with the stroke of a pen,” wrote Rep. Ayanna Pressley (D., Mass.) on Twitter. “He can and must use it. The people deserve nothing less.”

On Friday, a group of 17 state attorneys general, all Democrats, sent a letter to Biden pressing him to sign an executive order canceling $50,000 in student loan debt per borrower, arguing that the debt “disproportionately harmed people of color” and contributed to “the racial wealth gap.”

Meanwhile, the White House is facing strong pressure from both border-state Democrats, who are concerned the Biden administration will be too lax on border security, as well as from left-leaning activists who want Biden to completely dismantle U.S. Immigration and Customs Enforcement.

Progressives accused Biden of breaking his promise to stop deportations for his first 100 days last week, after the administration released a memo outlining ICE’s new enforcement priorities. The deportation guidelines include illegal immigrants who are a threat to national security, those who entered the country after Nov. 1, 2020, and convicted felons.

Naureen Shah, a spokeswoman for the American Civil Liberties Union, called the guidelines “a disappointing step backward from the Biden administration’s earlier commitments to fully break from the harmful deportation policies of both the Trump and Obama presidencies” in a statement last week.

“The interim enforcement priorities detailed today import the injustices of the criminal legal system and will lead to continued disproportionate deportations of black and brown immigrants,” said Shah. “We expect better from the Biden administration.”

In contrast, multiple border-state Democrats told Politico last week that they are concerned the party is going too far on opening up the border and could pay the price in the next election.

“Our party should be concerned. If we go off the rails, it’s going to be bad for us,” said Rep. Vicente Gonzalez, a Texas Democrat. “Biden is going to be dealing with a minority in Congress if he continues down some of these paths.”

In other news...
‘Not Doing A D*mn Thing’: Mark Levin Rips SCOTUS Fo...
Grief, Confusion, Anger? How Should We Respond to t...
Triggered! Liberals Absolutely Can’t Handle These B...
Pro-Life People Showed Up to an Abortion Clinic to ...
President Joe Biden’s Schedule for Wednesday, Febru...
Is Biden Back in the Basement?
Visit our Discussion Forum at Libertati.com. Follow us: