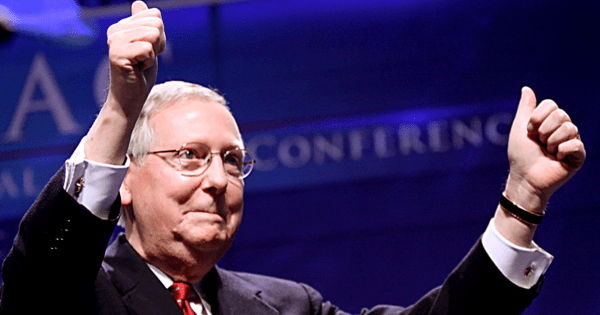 According to Politico, McConnell simply responded “I do” when asked if he planned to throw his support behind the confirmation of Garland in the Senate.

Garland’s Senate confirmation Monday was full of red flags for McConnell’s constituents, such as when the circuit court judge downplayed black supremacist statements made by assistant AG nominee Kristen Clarke, and claimed that Antifa attacks on federal courthouses – unlike election integrity protests – do not meet his standard for “domestic terrorism” because they happen “at night”:

“Well, Senator, my own definition, which is about the same as the statutory definition, is the use of violence or threats of violence, uh, in an attempt to disrupt democratic processes,” Garland responded.

The judge continued, “So an attack on a, uh, uh, uh, courthouse, while in operation, uh, trying to prevent judges from actually deciding cases, that plainly is, um, domestic, uh, um, uh, uh, domestic extremism, um, um, uh, uh, uh, domestic terrorism. Um, an attack simply on a government property at night or under any other kind of circumstances is a clear crime and serious one, and should be punished. I don’t mean, I don’t know enough about the facts of the example you’re talking about, but that’s where I draw the line, one is, both are criminal, but one is a core attack on our democratic institutions.”

President Donald Trump slammed McConnell earlier this month in a statement that described the Senate minority Leader as a “dour, sullen, and unsmiling political hack,” and referenced the latter’s ties to China.