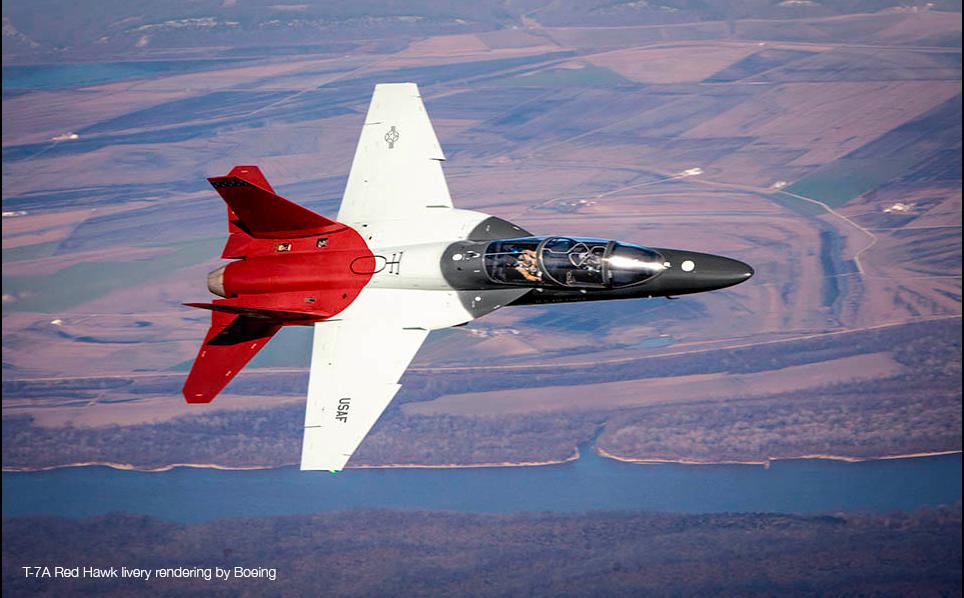 “We’ve been in some discussions with the Navy about a couple of different variants of the T-7,” he told reporters today. “There is no program of record right now, [but] we’re working closely with them in answering questions about the platform and its capabilities. And we’re hopeful that it will be able to play a role in the Navy’s training systems as well.”

The Navy in May 2020 released a request for information for a new trainer, capable of landing both on a runway and on a carrier, under its Undergraduate Jet Training System (UJTS) effort. Importantly, the Navy wants an off-the-shelf solution that can be fielded by 2028. It also wants a two-pilot configuration complete with ejection seats.  Vendors had until July 2020 to respond to the RFI, but no formal request for proposals has yet been released.

T7-A production for the Air Force is proceeding to schedule, according to Boeing officials speaking during today’s webinar with reporters in advance of the annual February Air Force Association show (virtual this year due to the pandemic.) Delivery of the first fully capable aircraft is slated for 2023.

The first production aircraft is set to roll off the line later this year, Dabundo said. Testing will take place both at Taylor Field and Edwards AFB, he explained. Initial flight testing using the production representative jet (PRJ) has been ongoing for about six months, he elaborated. That will be followed by a second stage using the EMD (engineering, manufacturing and development) model later this year.

“The flight test program is being jointly executed by Boeing and the Air Force,” Dabundo noted.

Boeing and teammate SAAB won a $9.2 billion contract to build the T-7A. The Air Force intends to buy 351, with related simulators and ground equipment to train pilots to fly fifth and fourth generation aircraft. But the indefinite delivery/indefinite quantity (ID/IF) contract allows for a buy of up to 475 jets.

The Air Force also has ordered T-7A 46 simulators and associated ground equipment, but can purchase up to 120 simulators under the current contract. The first of those are also slated to be delivered in 2023, just prior to the first fully capable aircraft.

Boeing further has set its sights on the possibility that the trainer could be used by foreign air forces as a light-attack aircraft — which is a typical spin-off mission for advanced trainer jets. Dabundo demurred providing details about what modifications the T-7A might require to serve in such a role, only noting that it “would really be very dependent on what the requirements were for the specific customer.”