41 States prohibit the Seizure of Guns During Emergencies 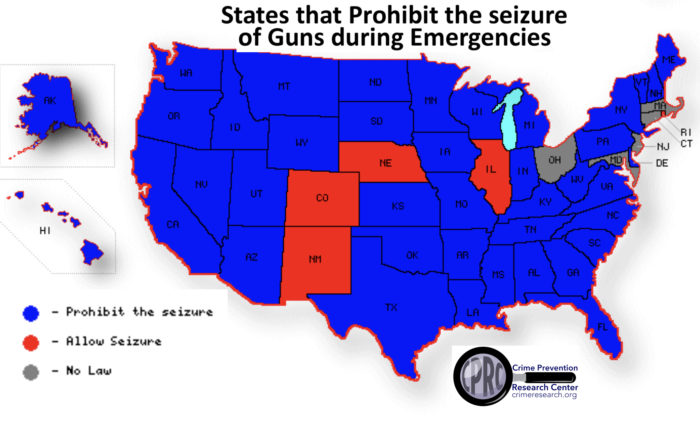 Forty-one states have laws that prohibit the seizure of guns during emergencies, five states have laws that allow such seizures, and 4 states and the District of Columbia have no such laws on the books. Some of these laws were passed in the aftermath of Hurricane Katrina, which made landfall on August 29, 2005. New Orleans police confiscated an estimated 1,200 guns. A week after the Hurricane’s landfall, New Orleans police superintendent Edwin P. Compass III made a widely publicized call for blanket confiscation: “Only law enforcement are allowed to have weapons.” As the New York Times reported: “no civilians in New Orleans will be allowed to carry pistols, shotguns, or other firearms of any kind.” Private security guards were exempted from the policy.

In addition, to laws that ban the confiscation of firearms during emergencies, some hurricane prone states such as Florida and Texas passed laws temporarily waiving concealed carry restrictions during mandatory evacuations. In 2006, Congress passed the DISASTER RECOVERY PERSONAL PROTECTION ACT.

This section amends the Stafford Act to prohibit federal employees, any entities (including state and local governments) receiving federal funds, and other relief workers from confiscating, requiring the registration of, or prohibiting possession of firearms during a disaster or an emergency if those firearms are legally possessed under federal or state laws. The bill also provides for a private right of action for restitution from an individual violating this section and for the return of the firearm confiscated in violation of this section. . . .

(1) In general.–Any individual aggrieved by a violation of this section may seek relief in an action at law, suit in equity, or other proper proceeding for redress against any person who subjects such individual, or causes such individual to be subjected, to the deprivation of any of the rights, privileges, or immunities secured by this section.

(2) Remedies.–In addition to any existing remedy in law or equity, under any law, an individual aggrieved by the seizure or confiscation of a firearm in violation of this section may bring an action for return of such firearm in the United States district court in the district in which that individual resides or in which such firearm may be found

(3) Attorney fees.–In any action or proceeding to enforce this section, the court shall award the prevailing party, other than the United States, a reasonable attorney’s fee as part of the costs

The 2006 Act raises questions about the viability of the state laws that allow for confiscation of firearms.

The problem with confiscation is that with police and the national guard already stretched thin, cell phone and phone service spotty at best, people who were facing threats were largely left on their own. Having police confiscate firearms may only increase the burden that police are already facing to do their jobs during emergencies. Research shows that it is the most vulnerable people — those who are the most likely victims of violent crime and who are relatively weaker physically — who benefit the most from owning guns. We have seen gun sales across the United States increase over the course of the last year when police haven’t been allowed or able to do their jobs.

A detailed discussion of the laws is provided in this link.

The states with laws that allow confiscation of firearms are:

Colorado: Colo. Rev. Stat. § 24-33.5-704 (7) In addition to any other powers conferred upon the governor by law, the governor may:
(h) Suspend or limit the sale, dispensing, or transportation of alcoholic beverages, firearms, explosives, or combustibles;

Illinois: 20 ILCS 3305/7 Sec. 7. Emergency Powers of the Governor. In the event of a disaster, as defined in Section 4, the Governor may, by proclamation declare that a disaster exists. Upon such proclamation, the Governor shall have and may exercise for a period not to exceed 30 days the following emergency powers; provided, however, that the lapse of the emergency powers shall not, as regards any act or acts occurring or committed within the 30-day period, deprive any person, firm, corporation, political subdivision, or body politic of any right or rights to compensation or reimbursement which he, she, it, or they may have under the provisions of this Act:
(9) To suspend or limit the sale, dispensing, or transportation of alcoholic beverages, firearms, explosives, and combustibles.

Maryland: Title 14, § 14-303. Governor’s proclamation of state of emergency
(b) After proclaiming a state of emergency, the Governor may promulgate reasonable orders, rules, or regulations that the Governor considers necessary to protect life and property or calculated effectively to control and terminate the public emergency in the emergency area, including orders, rules, or regulations to:
(8) control the possession, sale, carrying, and use of firearms, other dangerous weapons, and ammunition;

Nebraska: Sec. 8-85. – Restriction of activities.
Whenever a state of emergency has been declared as provided for herein, the mayor is hereby authorized to take one or more of the following specified measures throughout the city or any part thereof:
(e)Prohibit the sale, carrying or possession on the public street or public sidewalks, or in any public park or square, of weapons including, but not limited to, firearms, bows and arrows, air rifles, slingshots, knives, razors or missiles of any kind.

New Mexico: N.M. Stat. § 12-10-18 Emergency restrictions
A. During the existence of a state of emergency, the governor may, by proclamation, prohibit:
(5) the possession of firearms or any other deadly weapon by a person in any place other than his place of residence or business, except for peace officers;

Click this link for the original source of this article.
Author: johnrlott This content is courtesy of, and owned and copyrighted by, https://crimeresearch.org and its author. This content is made available by use of the public RSS feed offered by the host site and is used for educational purposes only. If you are the author or represent the host site and would like this content removed now and in the future, please contact USSANews.com using the email address in the Contact page found in the website menu.
In other news...
Corporate America goes ‘woke’
Federal Judge Rules CDC Eviction Moratorium Is Unco...
Report: Biden’s HHS secretary nominee advocates for...
Airline Accused of Discrimination After Hasidic Jew...
WATCH: DeSantis Declares ‘Days Of Failed Republican...
In Line For Senior Job at State, Sanders Aide Accus...
Visit our Discussion Forum at Libertati.com. Follow us: