160 Confederate Monuments Were Taken Down In 2020

At least 160 Confederate symbols including statues were removed from public spaces following the death of George Floyd in 2020, according to the Southern Poverty Law Center.

Of the symbols removed 94 were Confederate monuments, including a statue of Confederate General Robert E. Lee that was removed from the U.S. Capitol building after 111 years, according to Southern Poverty Law Center (SPLC) data. The left-leaning SPLC keeps track of around 2,100 public parks, buildings and statues devoted to the Confederacy through a database called “Whose Heritage?”

“2020 was a transformative year for the Confederate symbols movement. Over the course of seven months, more symbols of hate were removed from public property than in the preceding four years combined,” SPLC Chief of Staff Lecia Brooks said in a statement. 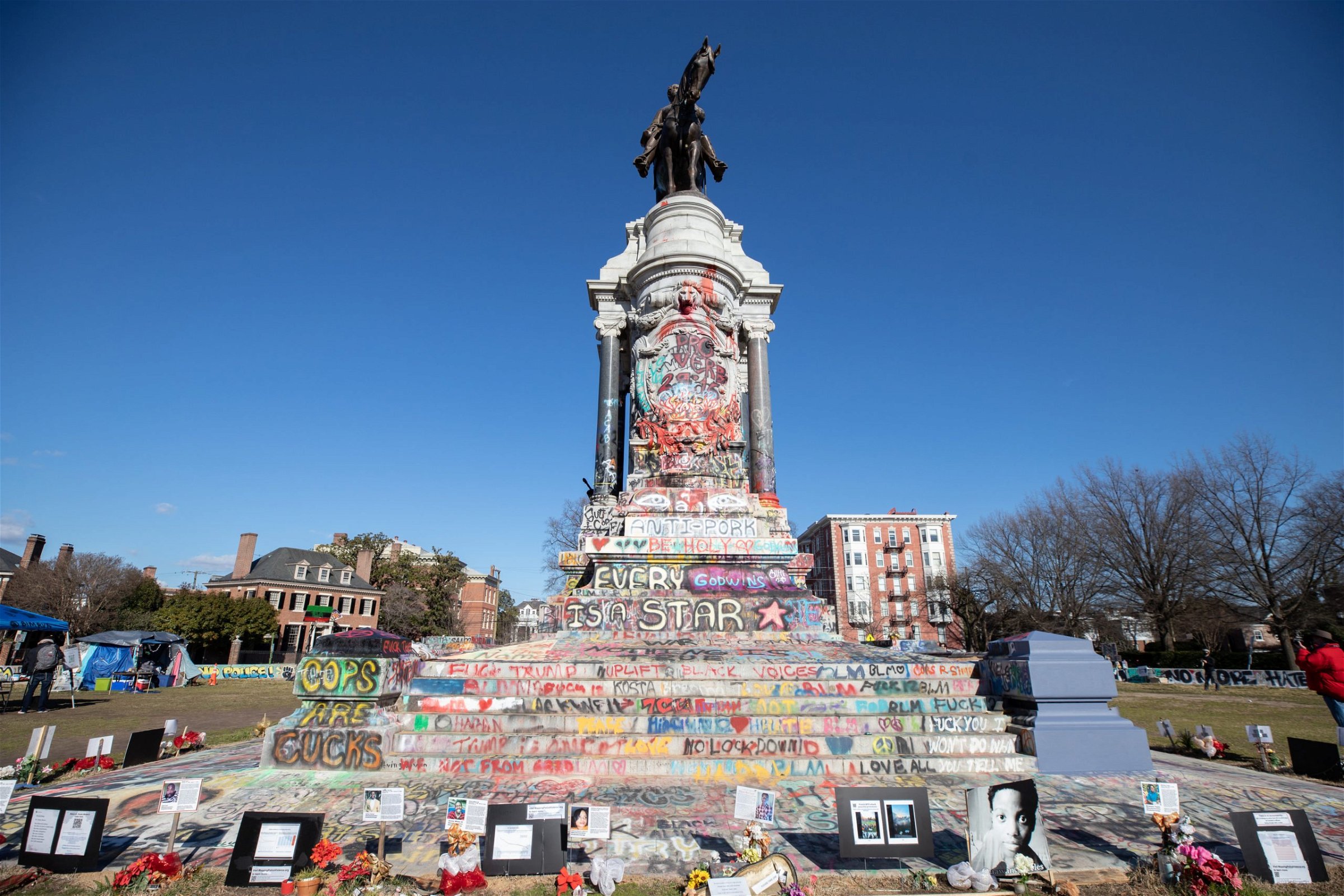 The Robert E. Lee statue in Richmond, Virginia, has been transformed into a piece of what community members call protest art where people gather to participate in mutual aid, play sports and garden, Jan. 17, 2021. (Kaylee Greenlee – Daily Caller News Foundation.)

The Robert E. Lee statue in Richmond, Virginia, which has been spray-painted with anti-cop and pro-equality messages, was named the most influential form of American protest art since World War II, according to The New York Times. The monument was the first erected in the former Confederate capital and is one of the last left after a summer of civil unrest where protesters tore down others.

It’s unclear whether the statue will be taken down as Democratic Virginia Governor Ralph Northam ordered its removal over the summer and was met with several lawsuits resulting in injunctions preventing its demise, The Times reported.

The movement to take down Confederate symbols from public spaces joined the national demonstrations against racial injustice, The Associated Press reported. Nationwide protests followed the in-custody death of Floyd after a former Minneapolis police officer knelt on his neck for nearly nine minutes, video shows.

“Despite this progress, communities informed the SPLC about more than 300 Confederate symbols located across the United States that remain,” Brooks said in a statement. “These dehumanizing symbols of pain and oppression continue to serve as backdrops to important government buildings, halls of justice, public parks, and U.S. military properties, including ten bases named after Confederate leaders across the South.”

The organization has monitored the monument removal movement since 2015, according to the SPLC. There are over two 700 monuments dedicated to the Confederacy across the U.S., and the organization is expecting states like Alabama, Georgia, Mississippi, North Carolina, South Carolina and Tennessee to uphold policies protecting the monuments from removal.

Also, protesters pulled down statues of former Presidents Abraham Lincoln and Theodore Roosevelt during an “Indigenous Peoples Day of Rage” demonstration in Portland, Oregon, the Oregonian reported. Protesters threw red paint and spray pained the statues before using chains to pull them from their bases.

160 Confederate Monuments Were Taken Down In 2020 is original content from Conservative Daily News – Where Americans go for news, current events and commentary they can trust – Conservative News Website for U.S. News, Political Cartoons and more.