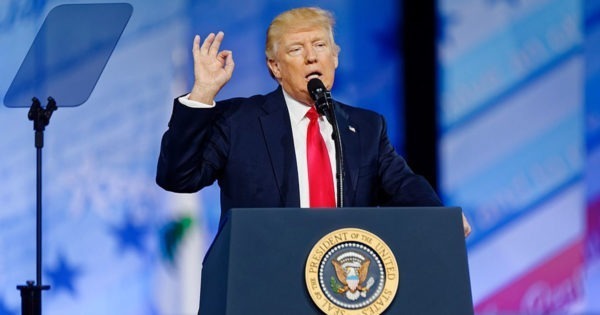 President Donald Trump will use his allotted speech time at the Conservative Political Action Conference in Orlando, Florida to paint himself as the presumptive presidential nominee for the Republican Party in 2024, according to a new report from leftist outlet Axios.

The speech will reportedly strike a strong tone against the GOP establishment, and offer praise for those who have remained loyal amidst recent political persecution by the Biden regime.

According to Axios, “A longtime adviser called Trump’s speech a “show of force,” and said the message will be: “I may not have Twitter or the Oval Office, but I’m still in charge.””

President Trump is expected to gin up support for primary challenges against Republican elected officials who have acted in a disloyal fashion against him, while showering praise and endorsements on candidates who will embody the vision of his 2016 campaign.

President Donald Trump released a powerful statement Tuesday morning that slams Sen. Mitch McConnell (R-KY) as a “dour, sullen, and unsmiling political hack” who will “never do what needs to be done, or what is right for our Country,” stating that he will back primary challengers against the Senate minority leader “where necessary.”

“Mitch is a dour, sullen, and unsmiling political hack, and if Republican Senators are going to stay with him, they will not win again,” President Trump said. “He will never do what needs to be done, or what is right for our Country. Where necessary and appropriate, I will back primary rivals who espouse Making America Great Again and our policy of America First. We want brilliant, strong, thoughtful, and compassionate leadership.”

President Trump also rejected Nimrata Nikki Haley’s request for a meeting at Mar-a-Lago last week, after she claimed the former President had lost “any sort of political viability he was going to have.”