North Cornwall Township Police Chief John Leahy was “temporarily placed on administrative leave with pay” while an internal investigation is conducted into what led up to the officer’s arrest, the Patriot-News reported.

“The board wishes to express its confidence in the members of its police department who continue to provide public safety services to the township’s residents, regardless of recent events,” a spokesman for the North Cornwall Township Board of Supervisors said.

The Board of Supervisors appointed North Cornwall Township Police Sergeant Harry Ward as interim officer in charge of the police force, the Patriot-News reported.

“The board further wishes to express its gratitude to its residents as it works to ensure that all appropriate questions are asked and measures undertaken to protect the continuing professionalism of the police department,” the spokesman said.

The investigation is focused on “the events surrounding Officer Fischer’s actions on Jan. 6, 2021 and afterwards,” according to the Patriot-News.

Officer Fischer was charged on Feb. 19 with obstruction of law enforcement during civil disorder, knowingly entering or remaining in any restricted building or grounds without lawful authority, violent entry, and disorderly conduct on Capitol Grounds, the Patriot-News reported. 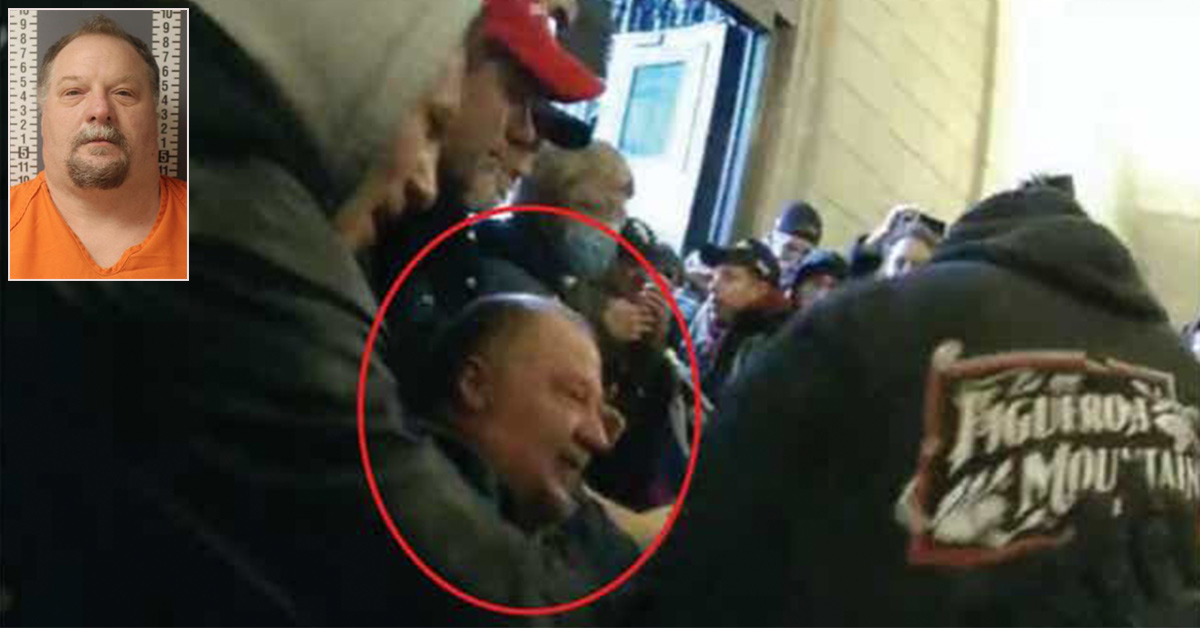 The 54-year-old officer was arrested and is being held at the Dauphin County Prison.

The criminal complaint alleged that Officer Fischer boasted about storming the U.S. Capitol building on Jan. 6 on his Facebook page, the Patriot-News reported.

Prosecutors said Officer Fischer posted a video of himself at the front of the mob of rioters pushing police officers, according to the criminal complaint. “I was there..we pushed police back about 25 feet,” the officer wrote on his Facebook page. “Got pepper balled and OC sprayed, but entry into the Capital was needed to send a message that we the people hold the real power.”

Prosecutors said that Officer Fischer communicated with someone via private message and said he “may need a new job” because word got out that he was at the rally and he might be arrested by the Federal Bureau of Investigation (FBI).

“If that is the price I have to pay to voice my freedom and liberties which I was born with and thusly taken away then then must be the price…” he told the person that he had told Chief Leahy, the Patriot-News reported.

“I told him I have no regrets,” Officer Fischer claimed to have told his police chief, according to the complaint.

The township quickly announced that Officer Fischer had been suspended without pay after he was arrested, the WGAL reported.

“North Cornwall Township was made aware that, earlier this morning, a member of its police force was arrested by the FBI on charges stemming from the January 06, 2021 incident that occurred at the United States Capitol building. No Township official had any knowledge of this individual’s actions prior to his arrest,” township officials said in a statement on Feb. 19.

“The Township recognizes every citizen’s right to free speech; however, each citizen must also be accountable for his or her actions. Accordingly, as required by the Pennsylvania Confidence in Law Enforcement Act, the police officer was immediately suspended without pay pending the disposition of these charges,” the statement explained.

“Neither the Township nor any officer or employee endorses, accepts, or condones any alleged participation in a crime against the United States of America nor any act committed by an individual who may have illegally breached the United States Capitol on January 06, 2021,” the statement concluded.

At least 18 people from Pennsylvania are facing federal charges in connection with the Capitol riot, the Patriot-News reported.

The post Small Town Police Chief Put On Leave Because One Of His Cops Was Involved In Capitol Riot appeared first on The Police Tribune.

Click this link for the original source of this article.
Author: Sandy Malone