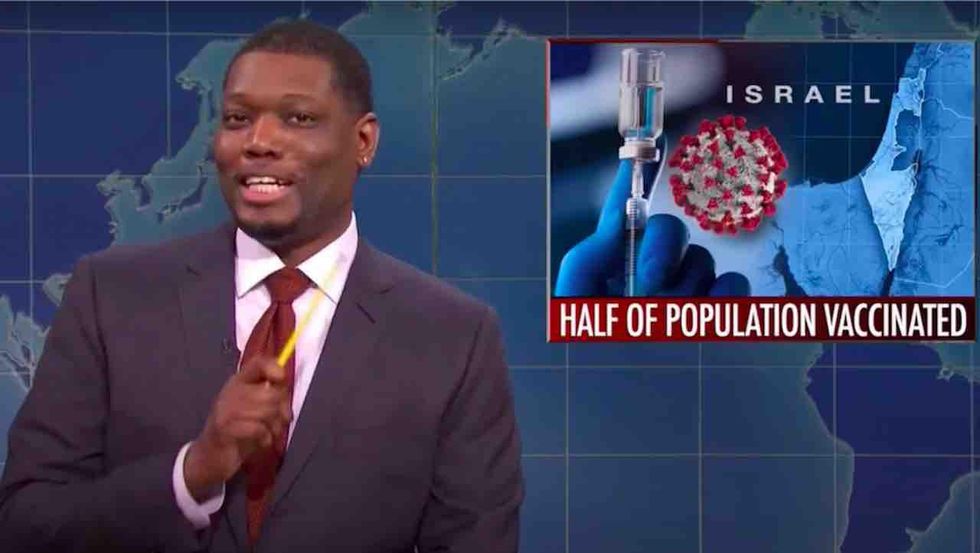 After drawing ire late last month for telling a joke denounced as “transphobic” and launching the left into a feeding frenzy upon itself, “Saturday Night Live” cast member Michael is in hot water again. And this time it’s for a joke many are calling “anti-Semitic.”

During the latest installment of the show’s “Weekend Update” sketch, Che noted that “Israel is reporting that they’ve vaccinated half of their population, and I’m gonna guess it’s the Jewish half.”

As with his controversial “Don’t ask, don’t tuck” quip last month, the studio audience responded with laughter that was a just tad on the nervous side:

How did folks respond?

“Saturday Night Live’s ‘joke’ isn’t just untrue — it’s dangerous, a modern twist on a classic anti-Semitic trope that has inspired the mass murder of countless Jews throughout the centuries,” the petition said, the paper reported. The joke also referred to the charge that Jews are responsible for plagues, according to the petition, which was to be delivered to NBC, the paper added.

“Spreading antisemitic lies & misinformation is already a problem,” Israel’s Consul General in New York Israel Nitzan tweeted at “SNL,” the Times of Israel said. “Fanning the flames just to get a laugh is not only wrong, it’s irresponsible. Israel has made the vaccine available for its entire population equitably, regardless of gender, race or religion.”

More from the paper:

Israel has offered vaccinations to all of its citizens, Jews and Arabs alike, in addition to Palestinian residents of East Jerusalem. But critics have faulted the Jewish state for not vaccinating the roughly five million Palestinians living in the Gaza Strip and the West Bank. […]

Critics of Israel’s vaccination policy point to the Fourth Geneva Convention, which states that an occupying power is required to provide vaccines to the inhabitants of the territories under its control.

Israel rejects the claim that it occupies the West Bank, saying the territories it has ruled since 1967 are “disputed,” rather than occupied. It also notes that it has pulled out of Gaza, though it maintains a blockade over the territory. As such, Jerusalem has never accepted the applicability of that international law statute to the territories.

Israel temporarily delayed the transfer of Russian-donated vaccines to Gaza, which is under an Israeli blockade to prevent weapons from reaching terrorist group Hamas, the paper also reported.

In other news...
Spoiler Alert: There Will Be No Change of Power on ...
Obama Claims He Broke A Classmate’s Nose For Callin...
New Democrat Legislation Seeks To Change Election R...
Top Trader Expects Ethereum and Binance Coin To Out...
Bill Gates: “Climate Change and Bioterrorism” Will ...
Biden Minimum Wage Hike Would Kill Family-Owned Res...
Visit our Discussion Forum at Libertati.com. Follow us: