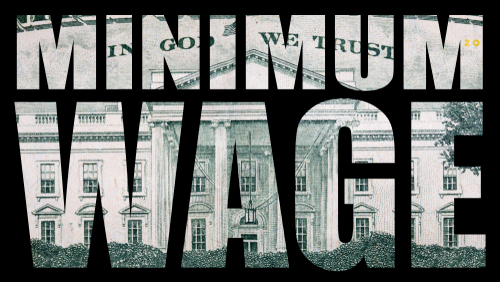 Employers must use the following hourly minimum wage schedule for non-tipped employees:

I voted for it because by 2026 we should see a rise in inflation due to shortages. However, the Federal bill increases the minimum wage to $9.50 an hour as soon as the bill is passed, raising to $11.00 an hour one year later, $12.50 two years later, $14.00 three years later, and $15.00 an hour beginning the fourth year following passage of the legislation.

While I am generally opposed to increasing the minimum wage because that has traditionally been the entry-level for kids in school. I would prefer to see the minimum wage qualified by age for raising it for part-time students will have an adverse impact on employment. Because of all of the extra-costs for an employer, this will merely increase the incentive to replace jobs with self-service screens and robots.

Eliminating employees is a dramatic cost reduction up to as much as 70% for most service-oriented businesses especially in hospitality. The danger of these lockdowns, masks, and social-distancing is that it is not merely breaking the bonds of human interaction, we have heard from corporate clients in hospitality that the prolonged lockdown crisis is shifting the business model toward robots rapidly because they cannot afford to pay staff to sit around for nothing.

We held our World Economic Conference in Orlando at the Hilton which is usually jammed-packed. This time, we had the hotel to ourselves and they were so ecstatic that we were even there. The hotel was running at 5% capacity and all but one restaurant was close. Additionally, there was no room service.

If we do not appreciate that rising healthcare costs are seriously impacting small businesses and their ability to hire staff. Increasing the minimum wage should really be differentiated by age as to not deter the youth from getting their first job.

In other news...
Report: San Francisco pays $16.1M to feed and house...
This push for transgenderism is for something, but ...
Israeli Health Minister Rebukes NBC Over ‘Dangerous...
FDA May Approve Johnson & Johnson Vaccine for U...
SITUATION REPORT: India/China Tensions Highlight A...
Democrats Unite Behind Election Reform Act to Count...
Try a better search engine at DuckDuckGo.com.