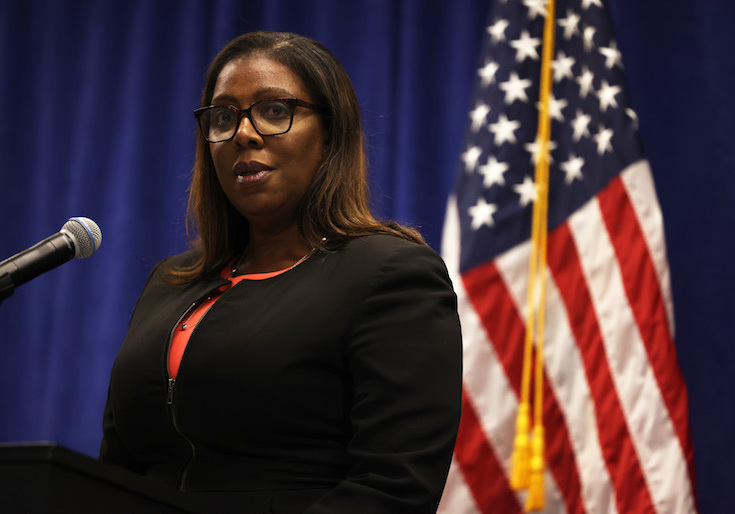 New York attorney general Letitia James (D.) asked a federal bankruptcy judge to dismiss the NRA’s case in a bid to prevent the gun-rights group from relocating to Texas.

James said the gun group is acting in “bad faith” and using bankruptcy mainly to avoid prosecution over accusations the group’s leaders, including CEO Wayne LaPierre, inappropriately spent tens of millions of dollars of NRA money on personal expenses.

“The National Rifle Association of America, Inc. (‘NRA’) seeks bankruptcy protection while claiming to be solvent and ‘in its strongest financial condition in years,'” James’s office said in a Feb. 12 filing, which was made public this week. “It invokes the jurisdiction of this court while publicly proclaiming that it filed its petition because it is ‘dumping New York,’ ‘utilizing the protection of the bankruptcy court,’ and ‘organizing its legal and regulatory matters in an efficient forum,’ essentially fleeing or seeking an end run around a pending regulatory enforcement action in New York.”

Throwing out the case would upend the NRA’s plan to counter James’s attempt to dissolve the group. The NRA believes the bankruptcy filing would require James to petition the bankruptcy court—in addition to the New York state court she is suing the group in—if she wants to seize the group’s assets. The removal of bankruptcy protection would likely require the group to rethink its entire legal strategy.

NRA lawyer William Brewer said the move by James was “another transparent move in a partisan crusade to shut down the NRA.” He pointed to James calling the NRA a “terrorist organization” during her campaign for office as evidence of her bias against the group.

“It is no surprise she now objects to the NRA’s plan to avail itself of the benefits of Chapter 11—for its members and all who support its Second Amendment advocacy,” Brewer said.

James called the NRA’s attempt to move to Texas “extraordinary” in her filing and said the group “has decided that it can cross state borders with its assets and open up in a different jurisdiction to evade law enforcement action” in New York. She noted the group, which reported its assets were more than double its liabilities in a filing on Monday, claims to be solvent and accused it of using bankruptcy simply “to avoid regulation in the state where [it] is chartered and subject to oversight.”

Brewer disputed her claims and said the group looks forward to its day in court.

“Attorney General James claims that Chapter 11 is an attempt to ‘end run’ litigation between her office and the NRA. That is false,” Brewer said. “As the Association has said repeatedly, it welcomes the opportunity to litigate these contrived claims and the motives which led to their filing.”

If the case is not thrown out, James asked the court to remove the NRA’s leadership and appoint a trustee to oversee the group during bankruptcy. She said there was cause to do so “based upon the demonstration of fraud, dishonesty, and gross mismanagement by the current management.” Disgruntled NRA donors involved in a class-action suit against the group have said they will also request a trustee.

The next hearing in the case is scheduled for Feb. 24.

In other news...
They Used to Call it Freedom
DC Elitists Call Cops On Truck With ‘Don’t Treat On...
"Shelters" under Biden, exposes media hypocrisy
Joe Biden Won’t Answer When Asked About Missing $2,...
Amazon Pulls Bestseller on Transgender Issues From ...
Jewish Youth in Spain Urge Madrid University to Exp...
Visit our Discussion Forum at Libertati.com. Follow us: