Fauci Opposed ‘Draconian’ Ebola Quarantines For His Colleagues In 2014, Warned Of ‘Unintended Consequences’ 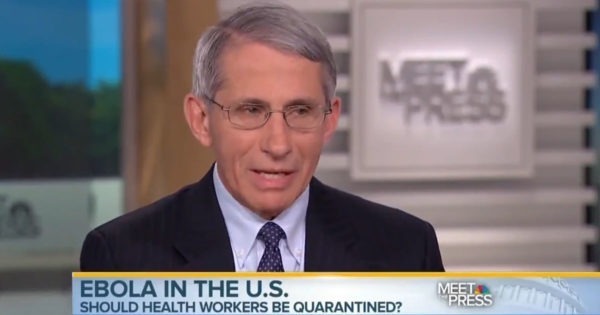 Joe Biden’s chief medical adviser Anthony Fauci has become the figurehead for pro-lockdown policies and other regulatory policies such as mask mandates and mandatory quarantines for those traveling abroad, but he did not always advocate mandatory quarantines during pandemics, particularly when said quarantines made his colleagues feel uncomfortable and disrespected.

In 2014, Fauci slammed then-governor of New Jersey Chris Christie for enforcing mandatory quarantines against healthcare workers who had traveled to Africa to spend prolonged periods of time around people infected with the Ebola virus.

“As a scientist and as a health person, if I were asked I would not have recommended that,” Fauci stated about the quarantine during an interview with ABC’s Martha Raddatz.

Fauci also stated, “We appreciate the fears of the American people, but you don’t want to have policy that would have negative unintended consequences… If you put everyone in one basket, even people who are clearly no threat, then we have the problem of the disincentive of people that we need.”

During an interview with NBC in 2014, Fauci said that government officials “need to treat returning people with respect” because “they’re really heroes.”

1/ Australia’s quarantine of people who come from an area with some covid cases is in total breach of the science.

Even people returning from an area with Ebola but WITHOUT SYMPTOMS only need to be monitored, not quarantined. This is Fauci in 2014.https://t.co/vEDOTHN6ln pic.twitter.com/LVEzfnJ3Vj

“We’re being a little bit draconian,” the director of the National Institute of Allergy and Infectious Diseases warned, complaining that the quarantines could make his colleagues “very, very uncomfortable.”

Fauci met with and treated Nina Pham, a hospital worker who contracted the Ebola virus while treating someone diagnosed with the disease, but saw no reason to quarantine himself afterwards, going on to appear on less than five morning talk shows according to the Wall Street Journal.

No quarantine for Anthony Fauci. He treated Nina Pham for Ebola but went on all five morning shows today: http://t.co/s3DK9Ipa8H

By contrast, Fauci made the very public decision to self-quarantine himself in May 2020 after a staffer in the Trump White House contracted the novel coronavirus COVID-19.

Fauci received a $1 million cash prize from Israel on Monday for his work “courageously defending science” against “uninformed opposition,” as well as his work studying AIDs by visiting gay bars and bathhouses.