GOP Congresswoman Has A Bunch Of Guns In Her Background, And The Internet Is Pissed 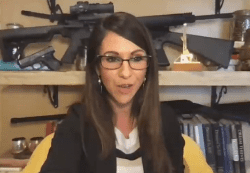 Republican Colorado Rep. Lauren Boebert came under fire Thursday over firearms displayed in the background of her online call.

Photographs of the new congresswoman from a Committee on Natural Resources live stream show her sitting in front of what appears to be several unsecured weapons stored on a shelf.

Boebert, who represents Colorado’s 5th congressional district, responded to the criticism in a Thursday tweet.

“Who says this is storage,” she asked. “These are ready for use.”

She did not immediately respond to requests for comment from the Daily Caller News Foundation.

“This is how Lauren Boebert appears during a house hearing,” tweeted writer Oliver Willis.

this is how lauren boebert appears during a house hearing. this is a very sane political party. pic.twitter.com/GvobX1RYho

“This is my opponent Lauren Boebert,” tweeted Boebert’s opponent Kerry Donovan. “She won her last race by under 6 points. Real toughness isn’t displaying guns on a bookshelf. It’s getting things done for people.”

Unsafe gun storage is no laughing matter. Is this Fascist fraulein really the best Colorado’s 3rd CD can do? 0/10 @laurenboebert pic.twitter.com/BjNQpWoiqs

Colorado Rep. Lauren Boebert has four children. If this is her home, she is clearly not a responsible gun owner. Guns should always be locked, unloaded and separate from ammunition.

Others praised the congresswoman’s gun display.

BREAKING: Rep. @LaurenBoebert gives an epic defense of the Second Amendment with a savage backdrop ???? pic.twitter.com/AK0Ccx1usO

GOP Congresswoman Has A Bunch Of Guns In Her Background, And The Internet Is Pissed is original content from Conservative Daily News – Where Americans go for news, current events and commentary they can trust – Conservative News Website for U.S. News, Political Cartoons and more.