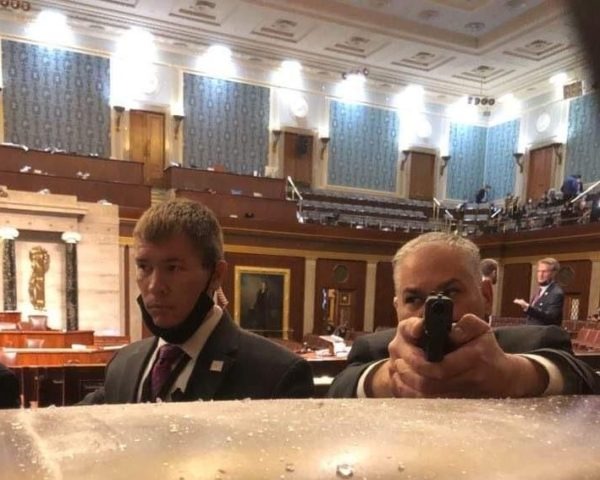 The U.S. Capitol police are reportedly investigating Republican congressmen for two separate incidents that occurred in the metal-detector phase of the U.S. Capitol experience. The police are relying on a highly suspect witness: a Huffington Post “reporter” who pushed a false narrative about protesters supposedly opening fire during the January 6 protest at the Capitol over the disputed election results.

The Huffington Post’s Matt Fuller announced: “So Capitol Police called me today to come in for an interview. They were pretty cryptic on what it was about, but it turns out they have two ongoing investigations that I was witness to: one, the potential assault of an officer by a Member of Congress, the other, Andy Harris. The first investigation is about Rep. Russ Fulcher manhandling an officer who was at the metal detectors outside the House floor. I saw him very aggressively brush a female officer aside after he set the magnetometer off the night of 1/12…The other investigation was about Andy Harris bringing a gun to the House chamber, being turned away, and then asking Rep. John Katko if he would take the gun for Harris. The cops wouldn’t tell me exactly what they were investigating about that incident, but judging by their questions, they were interested in determining whether Harris’s gun was concealed… Anyway, I’m glad to learn they’re investigating both of these incidents.”

Fuller’s work on Capitol-related reporting has proven to be deficient, yet he is still inexplicably employed by the Huffington Post. As NATIONAL FILE reported:

Huffington Post congressional reporter Matt Fuller wrote a viral tweet during the U.S. Capitol protest in which he falsely accused President Donald Trump’s supporters of firing guns into the body of the United States Congress. The tweet remained live for many hours after Fuller’s narrative was debunked. By that time, Fuller had been retweeted by top political figures. Will the mainstream media face scrutiny for pushing disinformation during a time of crisis? Fuller currently remains employed with the Huffington Post.

“They’re shooting into the chamber,” Fuller tweeted during the Capitol protest on January 6. Low-rated MSNBC host Chris Hayes drew attention to the false narrative by jumping in to exclaim in reply, “shooting what!?!?!?!” The construction of Fuller’s sentence made clear that he was accusing patriotic protesters of shooting into the chamber. In actuality, no protesters fired guns in the protest. Capitol Police shot unarmed protester and Air Force veteran Ashli Babbitt in the neck and killed her, but that shooting did not take place in the Chamber. The photo Fuller shared showed law enforcement pointing guns but obviously no evidence of protesters firing shots.

Other journalists and media figures added to the hysteria in real time, based on Fuller’s tweet.

How on earth did they not have a huge force prepared for this. These terrorists *said* this was their plan. @MEPFuller just tweeted that “guns have been drawn.” Now, “they’re shooting into the chamber.” People. The U.S. Capitol is in the midst of a terrorist attack.

Fuller deleted the tweet but it is now archived for posterity. The tweet remained live after Fuller’s narrative was debunked, and was still live the next day.

A HuffPost reporter’s tweet that “They’re shooting into the chamber” is still up despite the fact that no protesters shot into anything and in fact the police gunned down a nice lady who was an Air Force veteran. Carry on.

Should Fuller face condemnation for his role in heightening tensions during the Capitol riot? Fuller’s Fake News — which he clearly posted with no regard whatsoever for the truth — helped dictate the media’s narrative that protesters were responsible for unspeakable violence, when in actuality the only shot fired came from a Capitol Police officer. Make no mistake: Fuller’s statement that “They’re shooting into the chamber” placed false blame on protesters outside the chamber. His message, when amplified by people in D.C. politics and media, was irresponsible at best.

The mainstream media is an arm of the crooked political establishment in Washington, D.C. Their sinister subversive narratives drive the globalist totalitarian takeover of the United States of America. The political class response to the Capitol protest signals acceleration on the part of the globalist authoritarians. Clearly, the Washington scribe media is happy to play their part.

In other news...
14 Undocumented Migrants Apprehended During Brazen ...
Does France Want Their Statue Of Liberty Back?
New Lotus 2030 Le Mans
Planned Parenthood Kills 41 Babies for Every Woman ...
COVID Bill Contains Pork For All Biden’s Cronies, 5...
Israel Hints It May Not Engage Biden on Iran Nuclea...
Visit our Discussion Forum at Libertati.com. Follow us: