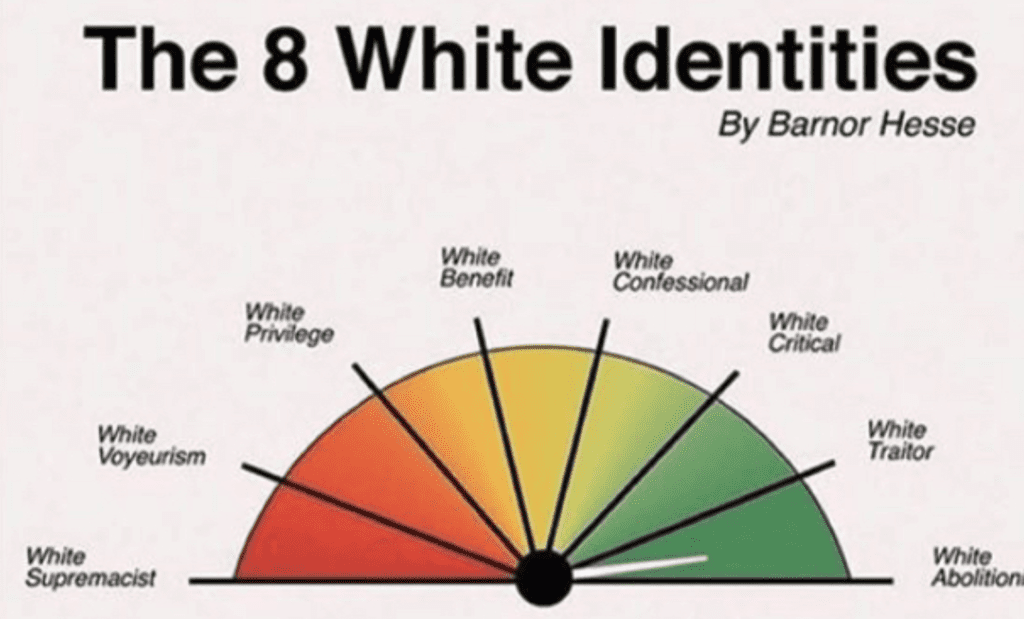 A principal in New York sent out a “tool for action” but singled out a specific group of parents: white parents. Twitchy.com reported, “critical race theory watchdog Christopher F. Rufo is reporting that the principal of a New York school sent the list of white identities to white parents so that they could try to convert themselves from white supremacists to white abolitionists.”

“SCOOP: The principal of East Side Community School in New York sent white parents this ‘tool for action,’ which tells them they must become ‘white traitors’ and then advocate for full ‘white abolition.’ This is the new language of public education” tweeted Rufo. Accompanying the tweet was a graphic titled “The 8 White Identities” by Barnor Hesse.

The graphic goes from red to green with the ranges of “whiteness” going from “White Supremacist” in the red, to “White Abolitionist” in the green. The color chart comes with a key to explain the 8 identities: “There is a regime of whiteness, and there are action-oriented white identities. People who identify with whiteness are one of these. It’s about time we build an ethnography of whiteness since white people have been the ones writing about and governing others.” Then, each level of “whiteness 1-8” is explained in detail.

A “white supremacist,” in the most-read section is defined as: “clearly marked white society that preserves, names, and values white superiority.” At the other end of the graph in the green, is number 8, the “White Abolitionist” described as: “changing institutions, dismantling whiteness, and not allowing whiteness to reassert itself.”

Twitchy writes that the “eight ‘white identities’ has been passed around on Facebook for a couple of years, but we’d never heard of its author, Professor Barnor Hesse.” In a post in Medium, Lecia Michelle wrote Hesse is an associate professor of African American studies, political science, and sociology at Northwestern University who developed the list “for black and brown people to use as a resource to categorize those people who claim to be our allies.”

Michelle wrote that if a white person even attempts to rank themselves on the chart, “you failed miserably. White people have no business ranking their own allyship.” Michelle added, “if you ranked yourself as anything other than a plain-old white supremacist, you also failed.”