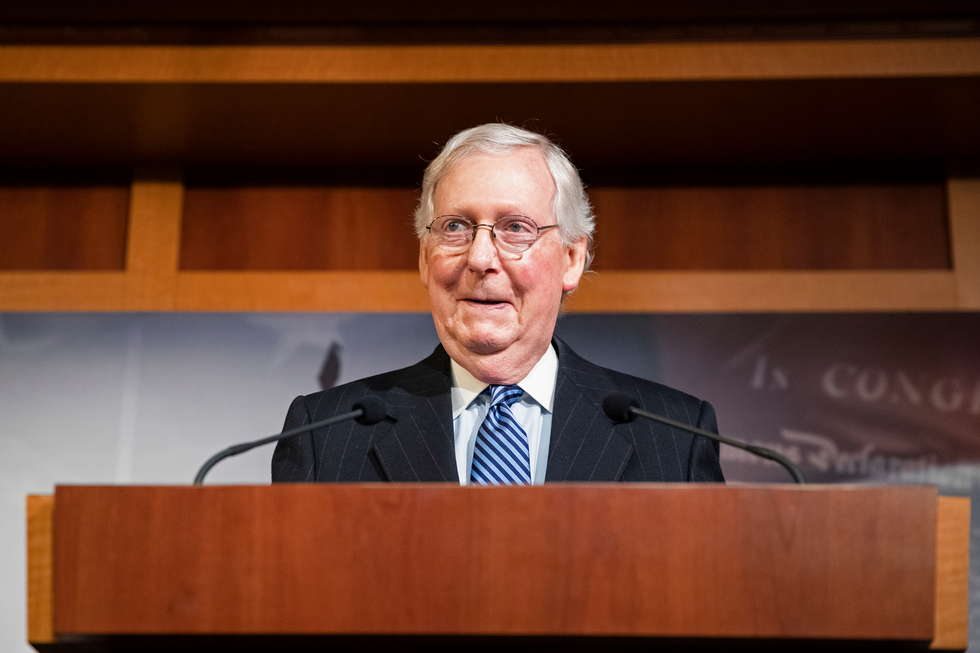 But according to a new report, McConnell’s “instant reaction” to the attack was laughter.

CNN chief congressional correspondent Manu Raju reported Wednesday that McConnell not only laughed in reaction to Trump’s criticisms, sources close to the minority leader say he has no plans to acknowledge the message or its author.

“You probably are not going to hear him utter the name Donald Trump ever again,” one source told the outlet. “He’s moving on.”

Prior to Trump’s lengthy rebuke, McConnell delivered a few public criticisms of the former president following the Senate’s second acquittal of Trump in a year. Although the Kentucky Republican voted against conviction on constitutional grounds, he sought to make it clear that he felt Trump’s actions played a significant role in the Jan. 6 attack on the U.S. Capitol by Trump supporters.

“There’s no question — none — that President Trump is practically and morally responsible for provoking the events of [Jan. 6.],” McConnell said Saturday from the Senate floor. He made the remark following the 57-43 vote to find Trump guilty of inciting an insurrection, which fell short of the 67-vote threshold needed to convict.

Then, in an op-ed for The Wall Street Journal, McConnell reiterated that there is “no question former President Trump bears moral responsibility” for the Capitol siege.

In reaction, Trump issued a statement saying that “the Republican Party can never again be respected or strong with political ‘leaders’ like Sen. Mitch McConnell at its helm,” adding that “Mitch is a dour, sullen, and unsmiling political hack, and if Republican Senators are going to stay with him, they will not win again.”

Worked together on GOP accomplishments

During Trump’s time in the White House, he and McConnell were able to work in tandem on a number of GOP accomplishments, including notably placing more than 200 federal judges into lifetime appointments and filling three U.S. Supreme Court seats.

But even before the latest impeachment trial, the two were pointing fingers at each other over losing control of the Senate after two devastating defeats in Georgia — where the president and his allies alleged ahead of a Jan. 5 runoff that the election system in the state was compromised.

Now, McConnell’s focus is on winning back control of the upper chamber by selecting GOP Senate candidates based on electability, while Trump has vowed to “endorse primary rivals who espouse ‘Making America Great Again’ and our policy of America First.”