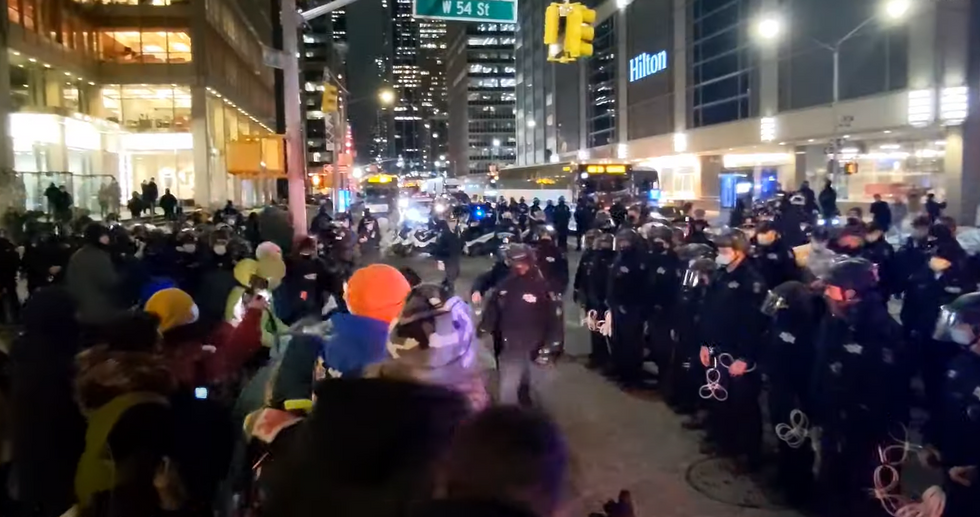 Approximately 100 protesters attended the “F*** 12” march in Midtown Manhattan. According to the Salt Lake Tribune, “F*** 12” and “F12” are anti-police terms that mean “f*** the police,” a reference to the police TV shows “Adam-12” or “Barney Miller,” which was set at the New York City Police Department’s 12th Precinct.

Demonstrators with Black Lives Matter, which was nominated for the 2021 Nobel Peace Prize three weeks ago, burned an American flag and a pro-law enforcement thin blue line flag near the NYPD kiosk in Times Square in a supposed protest against police brutality.

#F12 protesters took over the streets of NYC last nite to say “Fuck 12!” to the cops who brutalize Black & Brown fo… https://t.co/rfwXSpEETO

Demonstrators stopped traffic by putting barricades in the middle of the street.

Overnight in NYC, #BLM protesters shut down traffic by pulling blockades into the street. https://t.co/q5Okwfc917

During the F12 march at the intersection of Sixth Avenue and 54th Street, someone motioned towards a man and yelled, “He’s a cop!” Approximately a dozen protesters surrounded the man, who is actually a New York Daily News photographer. The New York Post reported that the crowd began “shoving him and beating him with their fists and other objects.” The victim, identified as Sam Costanza, suffered a broken nose, according to the New York Daily News.

Video taken by Oliya Scootercaster of Freedom News TV shows NYPD officers clashing with protesters in the streets of Manhattan.

There was a physical altercation between police and a protester.

During the violent confrontation, two police officers were injured, and 11 protesters were arrested. Two police vehicles were also damaged.

Portland Police officers were pelted with snowballs as the crowd chanted: “Quit your job!” Agitators dressed in all-black also threw snowballs at a police SUV as it drove by.

Snowballs are thrown at passing Portland Police cruisers as they try to monitor the park #Portland #PortlandSnow… https://t.co/PF04QHDFn7

Last weekend, BLM and Antifa demonstrators marched in the streets of Washington, D.C., where protesters tangled with police officers. As the crowd marched down the streets, they chanted threats to “burn down” the nation’s capital.