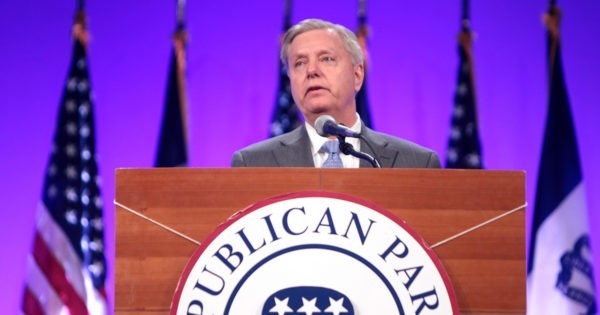 Sen. Lindsey Graham (R-SC), who just won reelection and now will not have to encounter his voters at the ballot box for almost six years, has joined Republican Sens. Mitt Romney (R-UT), Susan Collins (R-ME), Lisa Murkowski (R-AK), and Ben Sasse (R-NE) in defecting to the Democrat side in a vote to call last minute witnesses and delay the vote, which appears to be an inevitable acquittal.

This morning the impeachment trial of President Donald Trump was widely expected to end unceremoniously. Senate Minority Leader Mitch McConnell told other Republicans that he would vote to acquit the former President, signaling that the majority of Republicans would join him, meaning it is virtually implausible for President Trump to be convicted.

However, Democrats unveiled a last minute plan to call additional 11th hour witnesses to slow down the vote with more testimony. Romney, Collins, Murkowski, and Sasse, four of the most anti-Trump senators, were widely expected to join them.

Surprisingly, Graham – who often appears on Fox News alongside Sean Hannity to defend President Trump – joined the Democrats and Republican defectors, changing his vote at the last minute.

The five Republicans now who voted AYE on witnesses:

There will be witnesses. pic.twitter.com/1L0KskJ2m6

Graham seemingly defended his vote on Twitter, seemingly attempting to blame his decision to join the Democrats and vote to delay a vote on President Trump’s guilt on the “liberal media”.

“If you want a delay, it will be a long one with many, many witnesses,” wrote Graham. It is unclear how or if he believes this will help President Trump.

If you want a delay, it will be a long one with many, many witnesses.

Following his announcement that he was done with President Trump following the Capitol Hill protests on January 6, Graham was lambasted by radio legend Rush Limbaugh, who explained that Graham never cared about helping President Trump or enacting his America First agenda, but merely wanted the former President to act less like an outsider and more like a “Washingtonian.”