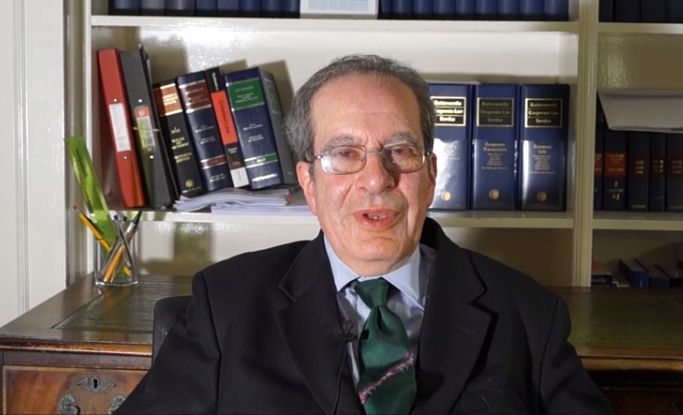 The barrister and author Nigel Ley has died after a lengthy illness. The above photograph is a screengrab from a YouTube video uploaded in 2013. He should not be confused with another barrister of the same name.

Nigel Joseph Ley  was the only child of Gerald Ley and Grace Ley née Betesh; they married at Manchester in early 1945. Nigel attended Battersea Grammar School then studied at Manchester University, and was called to the Bar in 1969.

Although he did not have big political ambitions, he joined the Labour Party and later switched to the Liberal Democrats, for whom he was Parliamentary Candidate for Holland With Boston at the 1992 General Election. Unsuprisingly he trailed in third in this Conservative stronghold. Away from the law and politics, he was a keen horseman, played bridge, and in his youth served in the Territorial Army rising to the rank of captain.

He began practising law in Manchester but moved to London eventually starting his own chambers, Grays Inn Chambers, near Grays Inn Road.

As a barrister he argued many cases, but his finest performance was undoubtedly as lead counsel in Riley v Gable, Searchlight Magazine Limited & Others at the High Court in 2000. This was the last defamation trial to be held under the old rules, before the misnamed Wolff reforms, so Morris Riley was the plaintiff rather than the claimant, although he was still referred to as the claimant at the trial.

Originally, John Orme had been booked to take the case, but having been called to the Bar late in life after serving as an MP in the Tynwald, he had never actually conducted a defamation action before, and lost his nerve at the last moment. He brought in Ley as head of chambers to share the brief at no additional cost, and the two men did a stellar job.

Gerry Gable was the man behind Searchlight magazine which he had started with Maurice Ludmer in the 1970s. When Ludmer was editor, he and his co-conspirator Dave Roberts had peddled ludicrous tales to the British press about the “Nazi underground”. They were aided in this endeavour by the gullible Telegraph journalist Peter Gladstone-Smith and the usual media mendacity. Although it is all but forgotten today, Column 88 was said to have a secret army of four hundred men and women who could bomb, maim, and murder with total impunity. It turned out to be a group of pillocks parading around in Nazi-style regalia and celebrating Hitler’s birthday.

After Ludmer’s death in 1981, Gable and his other co-conspirator Vron Ware distanced themselves from Roberts, who died young and forgotten the following year. Instead, Gable cultivated another self-styled “Nazi mole”, the odious Ray Hill, a man who had become involved with the extreme right for all the wrong reasons.

Morris Riley sued the magazine over an article in Ray Hill’s regular column, which Hill denied writing. Because Gable and Hill had told so many provable lies, there was no way either man could expose himself to cross-examination, so after their barrister had done his best to belittle and humiliate Riley, the defence stood pat.

In a criminal trial, no adverse inference is supposed to be drawn from a defendant’s failure to testify, certainly in the United States. In a civil trial though, this rule doesn’t apply. In his closing argument, Ley hammered away at the failure of the defendants to take the stand. He also made a very important point. Prior to the trial, Gable had accused Morris Riley of working for British Intelligence, yet in the courtroom his defence counsel had sought to portray him as a fantasist who claimed to be a spy. They can’t have it both ways, Ley insisted.

The judge summed up with consummate fairness, and when the jury returned, they announced they had found for Mr Riley, and awarded him £5,000 damages. Sadly, he died in June 2001 at the relatively young age of 55.

This trial was significant because although it wasn’t the first libel action Searchlight lost, it was the first in which a judgment had been entered against it.

Whatever other cases Nigel Ley handled, his two books are more significant. Drink Driving Law was published in 1993 with a second edition in 1997; False Imprisonment was published in 2001. Both were standard works, the latter on bringing actions against the police.  He was a specialist in drink driving law, and the same year the first edition of his book on this subject was published he argued successfully before the Queen’s Bench in the case of Murray v DPP, which saw the quashing of the applicant’s drink driving conviction on a technicality, something that will have annoyed the police.

Although Nigel Ley never married, he had what can only be described as a complicated love life which caused problems after he was taken ill in 2017 and moved to a hospice. His mistress remained a faithful friend, but his second mistress, a fellow barrister, moved herself into his home and began treating the property as her own. The following year he was declared incapable of managing his affairs and brought under the jurisdiction of the Court Of Protection, but fortunately (though not for her), this woman died in April 2018.

Apart from the female rabbi, only seven people attended his funeral service and cremation at Golders Green Crematorium on September 10, partly due to the current situation; the rabbi said many funerals were now being conducted by Zoom. The mourners included his executor, two elderly female cousins, and Jeremy Helm, previously known as Extremely Frank, who along with his busking partner Bongo Mike, Ley represented several times over the years.

This was the third funeral Helm had attended this year; last month he published an obituary of Bongo Mike in the Guardian. At the service he related how in July 1988,  Ley had tricked a police officer into admitting he and his colleague hadn’t arrested the pair when they removed them from a London Underground train, thereby proving their case. They had sued the Metropolitan Police for wrongful arrest, assault, and false imprisonment – the latter two being purely technical offences. They won, but a jury at Westminster County Court awarded them only tenpence damages each, which is more than Nigel Ley would sometimes charge impoverished clients; he would often give free advice to those most affected by decades of Legal Aid cuts.

Visit the USSA News store!
Click this link for the original source of this article.
Author: TheDarkMan