WASHINGTON: The FCC’s controversial decision to let Ligado proceed with its 5G wireless network over fierce DoD objections is just one more example of the broken state of the US regime for managing spectrum, industry experts say.

“There’s a lot of inefficiencies in the process. But it’s basically a fight, with each community pressing its case to its own regulatory body,” Jennifer Warren, Lockheed Martin’s vice president for technology, policy and regulation, told the Secure World Foundation (SWF) Summit for Space Sustainability this morning.

This has led a little-known but highly influential government advisory panel to recommend a series of options for overhauling the US regulatory system — including the creation of a new agency — to empower a single entity to decide how to balance skyrocketing demands for bandwidth as availability dwindles.

“[T]he United States’ current approach for managing the use of spectrum is no longer effectively serving the needs of the entire stakeholder community and would benefit from reform,” the Commerce Spectrum Management Advisory Committee (CSMAC) says in a recent report. “Moreover, with the increased use of spectrum by all stakeholders, we agree that issues around allocations, spectrum-sharing and band adjacencies will need to be handled with both speed and skill to ensure that the US is making the most of its critical national resources.” 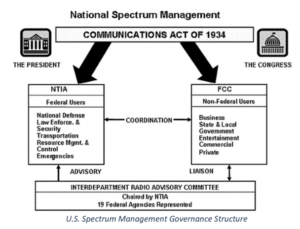 CSMAC, created by the Commerce Department in 2004, comprises spectrum policy experts outside the government.

The report, said Warren, who was one of the authors, was designed to kick start what many in industry see as an urgent debate about how US spectrum policies can accommodate a rapidly changing technological environment — particularly the emergence of 5G networking, which has the potential to revolutionize global communications.

Currently, two different US government bodies have regulatory control of spectrum by different users with very different priorities. The FCC governs use of spectrum by the commercial telecommunications industry (both terrestrial and space-based). The Commerce Department’s National Telecommunications and Information Administration (NTIA) governs access to bandwidth for government agencies, including DoD. This bifurcation was established by the 1934 Communications Act and remains in place despite massive upheaval in technology and spectrum use since then.

The Ligado case underscores that, despite a 2003 memorandum of understanding between FCC and NTIA that pledges them to coordinate, there is no requirement that they reach consensus, Warren explained. Indeed, there isn’t even a requirement that a disputed decision by the FCC, such as on Ligado, must be escalated for adjudication. Instead, the FCC has “unilateral decision-making power.”

Indeed, the CMSAC report stresses that: “There are no statutory federal or non-federal bands. All such federal, non-federal, and shared band allocations result from agreements between NTIA and the FCC.”

As Breaking D has reported extensively, DoD, the Intelligence Community, the Transportation Department, the FAA and even the Agriculture Department — not to mention congressional defense committee leaders — have charged that the Ligado plan will create serious interference to GPS receivers used both by commercial/civil users and US troops. Those concerns have been echoed by a number of commercial users groups, from airline pilots to construction workers to farmers.

Not only does the current regulatory system block rational decisions on spectrum sharing among types of users, it also creates problems for the United States in its negotiations with other countries on spectrum usage at the International Telecommunication Union (ITU),  Kimberly Baum, vice president of regulatory affairs at Echostar Corp., told SWF.

The ITU is responsible for setting rules about how spectrum is used by whom at the international level via its Radio Regulations and frequency allocation tables — something that particularly affects satellites that usually serve more than one nation. Every three to four years, ITU holds a World Radiocommunication Conference (WRC), the next of which is scheduled for 2023, where the 193 member nations propose changes to spectrum usage. The State Department is charged with bringing the US position on changes, developed by the FCC and NTIA, to Geneva. 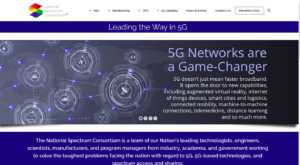 Baum, who also is co-chair of the Satellite Industry Association’s (SIA) regulatory working group, explained that because the NTIA and FCC each works with its own constituents, sometimes for years, to craft those WRC proposals, differences between them are not resolved until the last minute — if at all. And this loses the time the US needs to try to convince other countries to back its views.

(Indeed, as Breaking D readers know, a number of US lawmakers and policy experts are worried that internal US disarray on spectrum management rules for 5G is effectively ceding power at the ITU to China.)

“I would love to see a concerted effort to make decisions that meaningfully accommodate multiple services and technologies in a more fair, thoughtful way,” Baum said.

Any changes to the current regulatory system would require congressional action to rewrite the Communications Act, and re-allocate statutory authorities, said Warren.  A next step, she said, might be for the Government Accountability Office (GAO) to do a study of the issues and make recommendations to Congress.

In other news...
Nikola Founder Sends Employees To Germany On Privat...
US Plans to Enforce UN Sanctions on Iran With Its O...
Wealth Tax – A Warning To (All) Taxpayers
New Hampshire Selectman Regina Barnes fends of call...
Support For BLM Falls Further; Americans See "Prote...
Jogger Detained By Cops Obeys Orders, Gets Incredib...