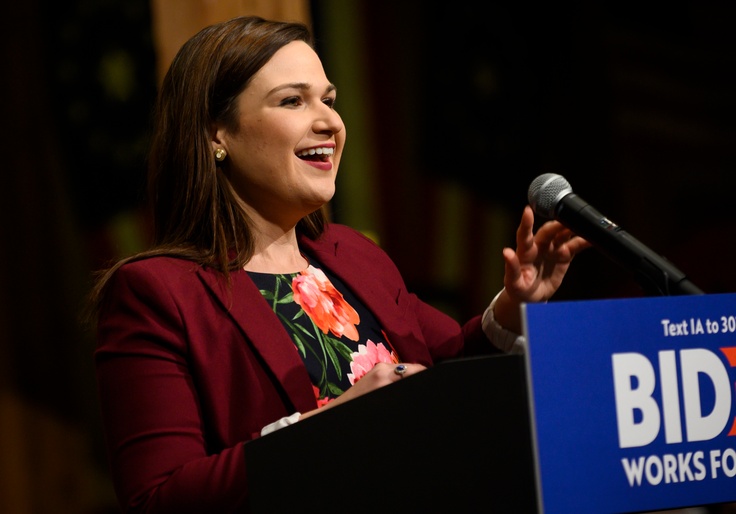 Rep. Abby Finkenauer (D., Iowa) dodged a question about her support for late-term abortion during a Monday debate.

Asked by Republican opponent Ashley Hinson to clarify her “extreme” position in support of “abortions all the way up to the end of pregnancy,” Finkenauer refused to offer a stance beyond stating that women’s health care is “complicated.”

“I support Roe v. Wade as it currently stands, and I also know and believe that women’s health care is complicated,” Finkenauer said. “It is not black and white, and at the end of the day, legislators do not belong in the doctor’s offices of pregnant women.”

As a state representative in 2017, Finkenauer voted against a bill banning abortions after 20 weeks, the point in pregnancy in which fetuses can feel pain. Nearly three years later as a member of Congress, Finkenauer voted to block legislation guaranteeing medical care for infants who survive abortion. The Democrat has since received support from big-spending abortion groups in her bid to defeat Hinson—Planned Parenthood Action Fund, EMILY’s List, and NARAL Pro-Choice America have combined to give Finkenauer nearly $18,000 in direct contributions. She has also received more than $75,000 in contributions funneled through EMILY’s List.

Despite her previous votes, Finkenauer’s hesitance to embrace late-term abortion on the debate stage likely reflects its status as a losing issue for Democrats. According to a January Marist poll commissioned by the Knights of Columbus, 70 percent of Americans support restrictions on abortion after three months of pregnancy. A 2019 poll commissioned by the Susan B. Anthony List also found that nearly 80 percent of voters—including 70 percent of Democrats—support legislation mandating care to children who survive failed abortions.

“Democrats like Abby Finkenauer may duck and dodge, but she can’t hide the truth: The Democratic Party supports abortion up until the moment of birth—and even afterward, paid for by taxpayer dollars. Her own voting record is crystal-clear proof,” American Principles Project executive director Terry Schilling told the Washington Free Beacon. “Finkenauer and her Democratic allies also know that this position is completely out of step with the American people. So rather than defend their extremism, they constantly attempt to distract from the real issue or change the subject.”

Virginia governor Ralph Northam (D.) mirrored Finkenauer’s argument as he defended a 40-week abortion bill in January 2019, saying legislators “shouldn’t be telling a woman what she should or shouldn’t be doing with her body.” Democrats for Life executive director Kristen Day pushed back, telling the Free Beacon that lawmakers “also must protect the human life in the womb.”

“When a pregnant woman is in the doctor’s office, there is also an unborn child who is a distinct human being by any definition,” Day said. “Legislators absolutely have an obligation to protect the health and safety of the pregnant woman but also must protect the human life in the womb.”

Democratic presidential nominee Joe Biden has also lurched left on abortion in recent months. Biden said he could “no longer support” the Hyde Amendment—which bans federally funded abortions—in June 2019. He previously touted voting in favor of the amendment “on no fewer than 50 occasions” in a 1994 letter to a constituent. Finkenauer endorsed Biden in January 2020, one month before the Iowa caucuses.

The Finkenauer campaign did not respond to a request for comment.