Imagine telling an entire generation of Americans that within the next few months, they all have a significant chance of contracting pancreatic cancer unless they do as we say? Just think of the mental health and behavioral crisis such hyperbole would cause. Well, that is exactly what our government and media have successfully pushed on our society by treating every positive case of coronavirus as if it is a death sentence. Disproportionate fear and panic create a disproportionate mental health crisis.

A new survey by the Commonwealth Fund reveals that Americans have a higher level of anxiety about the virus than any other Western country surveyed. The nonprofit health care research outlet conducted a mental health survey of 8,200 adults in the U.S. and nine other high-income countries: Australia, Canada, France, the Netherlands, New Zealand, Norway, Sweden, and the United Kingdom. They found that 33 percent of the U.S. adults – the highest rate of any of the countries – reported experiencing levels of stress, anxiety, and sadness and are having a difficult time coping with the situation.

Here is the country-by-country breakdown presented by the Commonwealth Fund: 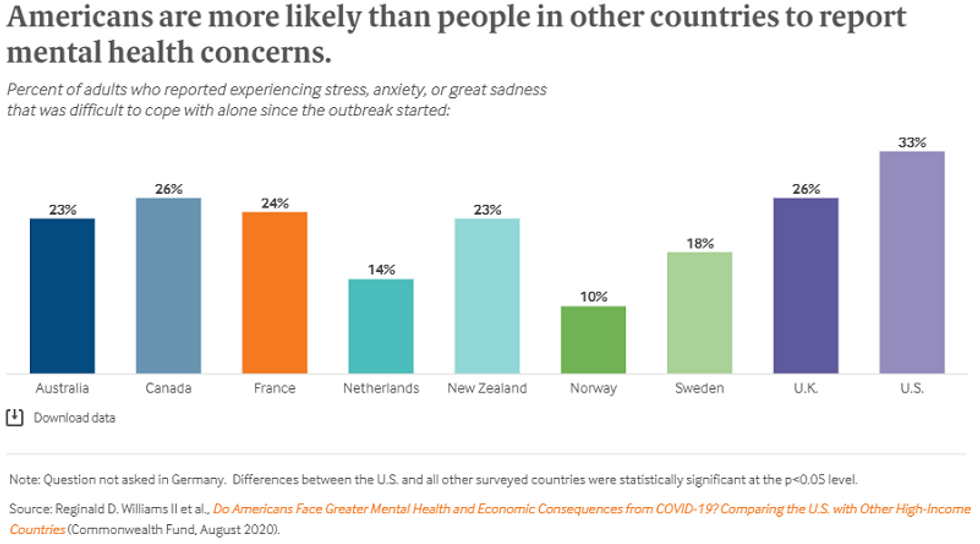 Very closely related to the fact that Americans appear to suffer the most anxiety is that they are the most likely to suffer economic consequences, according to the same survey. 31% of Americans affirmed that hey were unable to pay for basic necessities like food, heat, or rent. Americans were also the most likely to report losing a job (27%). One estimate pegs the long-term death toll due to economic collapse at well over 100,000.

Keep in mind this survey was conducted from March 30 to May 25, 2020. As time goes on, the degree of panic from the U.S. media has ratcheted up, despite the fact that the death rate appears to decline and the New York City epidemic never repeated itself with that intensity anywhere else. Hospitals are not overrun.

This degree of emotional and economic distress is truly hard to quantify. It’s been posited that tens of thousands of people likely died from missed health care during the shutdown. But the mental health crisis, while more subtle, is likely costing even more lives. Early in the pandemic, a Swiss study estimated that two percent of the Swiss population will lose a cumulative total of 1.8 million years of their lives due to suicide, depression, alcohol use disorder, childhood trauma due to domestic violence, changes in marital status, and social isolation.

For the United States, researchers extrapolated the data to show that, using the same methodology, the result would be a cumulative loss of 67.58 million years of life nationwide. If we assume the same percentage in America would suffer severely from these same adverse mental health issues, it would mean 6.9 million Americans would lose an average of nearly 10 years of their lives.

However, based on the Commonwealth Fund survey, it would appear that Americans suffer a much greater degree of emotional abuse at the hands of our government and media, and those numbers are probably much higher than in Switzerland, which has approached this virus more rationally since the survey in May.

The bottom line is that America has conducted 41 million more tests than the next free country (India). We have caused greater panic than most countries. At the end of the day, only .014% of Americans are hospitalized with COVID-19, and the lion’s share of deaths are those in nursing homes. Yet every new case is treated as if it’s a death sentence, and even children and young adults are terrified and think that many people they know will die.

The trauma and anxiety are especially acute in kids and adolescents who are already suffering a mental health crisis. Ironically, these are the people with the lowest vulnerability to the virus.The more schools are shut and masks are mandated, the more it gives off the false impression that the threat is as severe as these draconian mandates indicate. But it is clearly not.

Visit the USSA News store!
Click this link for the original source of this article.
Author: Daniel Horowitz