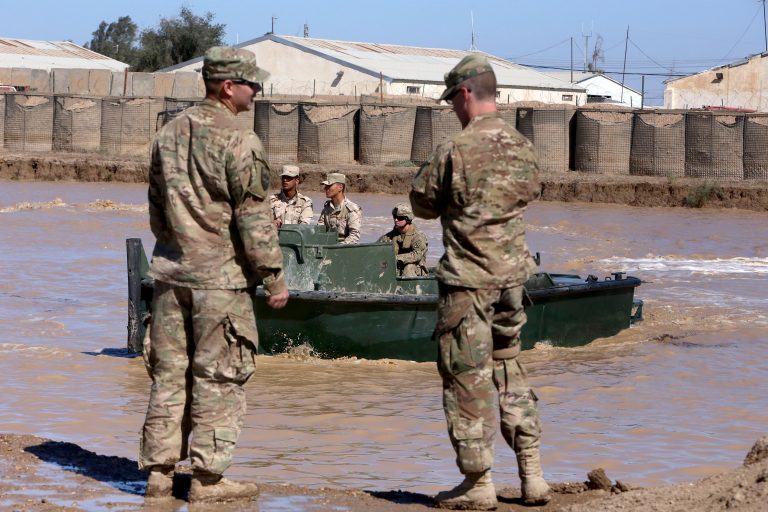 BAGHDAD (Reuters) – At least two explosions have hit convoys supplying U.S.-led coalition forces in Iraq in the last 24 hours, security sources said, the first on Monday evening near the southern border with Kuwait and the second on Tuesday north of Baghdad.

The explosions, which caused no casualties but did some material damage, are the latest in a string of such incidents in recent weeks. An attack in southern Iraq on Sunday hit a convoy carrying supplies to coalition forces, the military said.

Several thousand U.S. forces are still based in Iraq, leading a coalition whose mission is to fight Sunni Muslim Islamic State militants.

Those forces are also a target for Iran-backed Shi’ite militias, which the United States blames for regular rocket attacks on bases hosting the coalition, and on other U.S. targets such as Washington’s embassy in Baghdad.

The militias have vowed to avenge the death of paramilitary commander Abu Mahdi al-Muhandis, who was killed alongside Iranian military mastermind Qassem Soleimani in a U.S. drone strike in Baghdad in January. Political forces aligned with the militias demand a full withdrawal of foreign troops from Iraq.

They also oppose Iraq’s Prime Minister Mustafa al-Kadhimi, who took office in May. He is viewed as being friendly with the United States and has challenged the power of Iran-aligned armed groups in Iraq.

Kadhimi is struggling to make good on pledges to ensure Iraq does not become a theatre for power and resources struggles between foreign countries including the United States, Iran and other regional powers.

In a separate incident in northeastern Iraq on Tuesday, a Turkish air strike – part of Ankara’s latest campaign against Kurdish separatist militants based in the northern, Kurdish part of Iraq – killed three members of Iraq’s border guard, the Iraqi military said in a statement.

Tuesday’s explosion near the Taji military base north of Baghdad caused a fire to a container on one vehicle, the Iraqi military said in a statement. There was no immediate claim of responsibility for the blast.

The explosion on Monday night near the Jraischan border crossing between Iraq and Kuwait struck a convoy carrying equipment for U.S. forces, three sources from different branches of Iraq’s security services and military said.

Kuwait’s military on Twitter also denied any attack along its border with Iraq.

Vehicles are regularly loaded with military equipment at the crossing, the security sources said, and cargo is usually loaded or unloaded before entering or exiting Iraq.

Foreign companies are contracted by U.S. forces to provide security in the area, the Iraqi security sources said.

A little known Iraqi Shi’ite militia group by the name of Ashab al-Kahf claimed responsibility for the attack and published a video showing an explosion at a distance. It said it was able to destroy U.S. military equipment and large parts of the crossing.