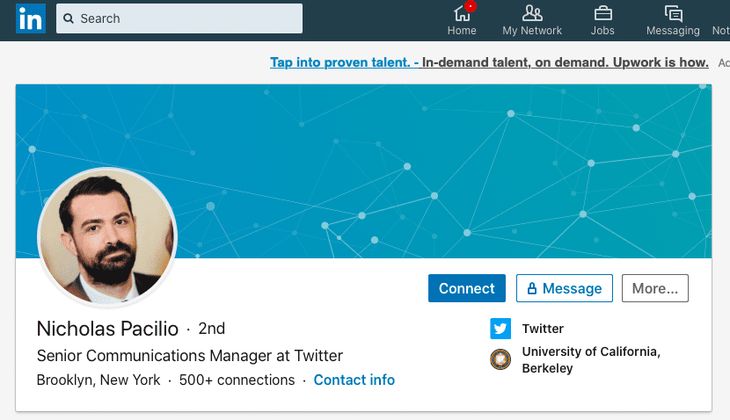 On Wednesday, Twitter deleted a Trump campaign video showing President Donald Trump saying that children are “almost immune” from COVID-19, claiming that the president’s claim was “misinformation,” even though children face much less risk for the coronavirus than adults.

Suspicions of political bias appeared confirmed yet again by a connection between the Twitter staffer who announced the Trump censorship and a former Democratic presidential candidate who may become Joe Biden’s running mate.

Yes, the Twitter staffer who announced the video’s deletion was himself a former press secretary for now-Sen. Kamala Harris (D-Calif.), one of the two black women who are reportedly on Biden’s vice-presidential short-list.

The original Tweet from @TeamTrump is in violation of the Twitter Rules on COVID-19 misinformation, and we’ve required removal. https://t.co/fDPcEa9hRe

Pacilio’s Twitter bio describes him as a “Former [Kamala Harris] press sec.” His LinkedIn page sheds more light on the situation: Pacilio served as Harris’ mouthpiece when she was the California attorney general. He served as her deputy press secretary for nearly three years, and her press secretary for one more.

Twitter can hire whomever it wants. The fact that Nick Pacilio lasted four years with Kamala Harris is impressive, and he may well be an excellent communications professional. But who thought it was a good idea to have a former press secretary for Kamala Harris announce the latest act of censorship against President Trump?

Twitter’s attacks on Trump are nothing new. In May, the social media company slapped an extremely partisan fact check” on a Trump tweet warning against potential fraud in vote-by-mail schemes. Twiter also hid another Trump tweet, claiming it violated the platform’s policies by “glorifying violence.” Twitter executives have also flaunted a disgusting anti-Trump bias.

While platforms like Facebook and Twitter are rightly concerned about dangerous misinformation during a pandemic, Trump did not claim that children are immune — he merely claimed that they are “almost immune.” Perhaps this statement was hyperbolic, but children are indeed at much less risk from the coronavirus than are adults. It appears the decision to delete Trump’s video was motivated by political bias, not public health concerns.

House Speaker Nancy Pelosi (D-Calif.) claimed President Trump will be leaving the White House “whether he knows it yet, or not.”

Visit the USSA News store!
Click this link for the original source of this article.
Author: Ben Warren

This content is courtesy of, and owned and copyrighted by, https://www.newswars.com and its author. This content is made available by use of the public RSS feed offered by the host site and is used for educational purposes only. If you are the author or represent the host site and would like this content removed now and in the future, please contact USSANews.com using the email address in the Contact page found in the website menu. The owner of this website may be paid to recommend American Bullion. The content of this website, including the positive review of American Bullion, the negative review of its competitors, and any other information may not be independent or neutral.

In other news...
‘I am disgusted with Bordeaux, we are no longer...
Progressive Congresswoman Rashida Tlaib Defeats...
Amid Wreckage of Beirut, Lebanese Call to Oust ...
Chuck Schumer Says Dems Will Sue If Trump Issue...
Powerful Trump Video
David Beckham is ‘in talks with Netflix and Ama...