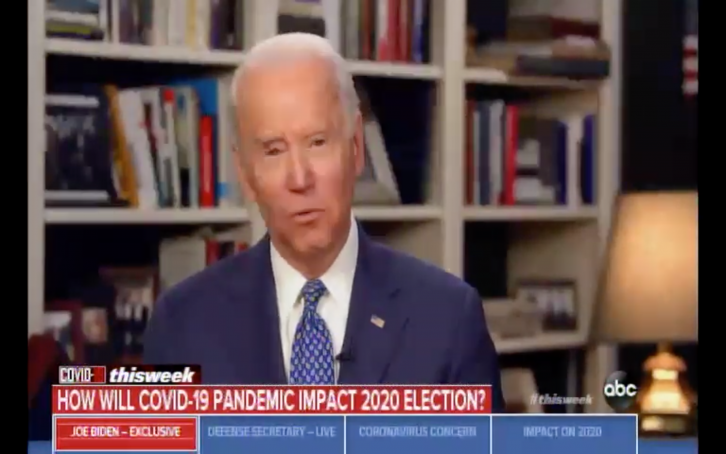 Former vice president and presumptive Democratic nominee Joe Biden said he apologized to Sen. Bernie Sanders (I., Vt.) for acting like the Democratic primary race is over after Biden told donors he would begin vetting vice presidential candidates.

“I was apologizing because it was a bit presumptuous of me to be setting up a committee to go through the process of deciding and doing the background checks on potential nominees,” Biden told George Stephanopoulos during an appearance on This Week Sunday morning.

“I was apologizing to him by saying, ‘Bernie, I don’t want to in any way to demean your effort but if we don’t start now, we’re not going to be able to get there,'” Biden continued.

“It was about saying to him, ‘Bernie, I feel somewhat foolish since, although I’m the overwhelming likelihood to get the nomination, that in fact it’s not officially done yet and I’m moving forward with a committee for vice presidential selection,'” Biden said.

He added that the call was not intended to push Sanders to drop out or to ask Sanders for recommendations on potential vice presidential picks.

In a virtual fundraiser Friday night, Biden told donors he had informed Sanders he was moving forward with the vice presidential selection process. Biden also clarified to donors he did not want to be presumptuous about the race ending.

The Sanders campaign is internally debating whether or not it should end as Biden’s delegate lead increases and the coronavirus pandemic threatens remaining primary voting.

Some Sanders advisers, including campaign manager Faiz Shakir and Rep. Pramila Jayapal (D., Wash.), are urging Sanders to drop out of the race, according to the Washington Post.

Sanders admitted his path to the nomination is growing “narrow” as he trails Biden by 313 delegates. The coronavirus pandemic has also caused several state primaries and the Democratic National Convention to be delayed.

The post Biden: I Apologized to Bernie for Acting Like the Primary Race Is Over appeared first on Washington Free Beacon.

In other news...
Houston Mayor Mocked for Begging Criminals to “...
Blackface Aficionado Justin Trudeau DESTROYED B...
FBI sees record-breaking requests for gun backg...
Stocks Soar After Trump Says He Expects 2 Count...
“Someone Ought To Sue His Ass Off!” – Epic! Tru...
Candace Owens Says She Will Run For Office: ‘I’...