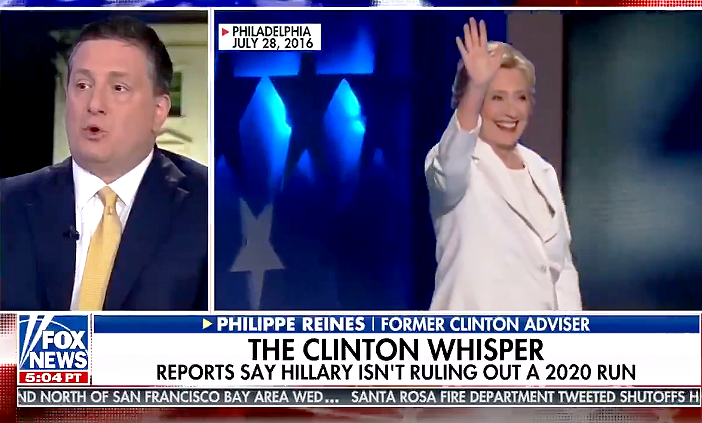 Hillary Clinton “might be the best person” to beat President Donald Trump in 2020, a former aide to the twice-failed presidential candidate said Wednesday.

Philippe Reines, one of the more colorful characters in the eccentric cast of longtime Clinton lackeys, suggested in an interview with Fox News’s Tucker Carlson that his former boss has not ruled out a third run for president in 2020. Reines was responding to recent reports that Hillary has privately expressed a willingness to run again if she believes she could win.

“I don’t know, she is not running because she has any anxiety about the Democratic field,” said Reines. “There might be a reason that she would be the best person, not only to beat Donald Trump but to govern after Donald Trump, which is a part we don’t talk about much.”

Reines went on to defend Hillary’s stated opposition to Sen. Bernie Sanders’s (I., Vt.) “Medicare for All” proposal, as well as her previous denunciation of so-called sanctuary cities that refuse to comply with federal law enforcement seeking to deport illegal immigrants. Reines argued—somewhat problematically by the standards of today’s Democratic Party—that deporting illegal immigrants was “not racist.”

The former Clinton goon also awkwardly struggled to defend Hillary’s recent comments about the transgender community in an interview with a London newspaper.

“Errr. I’m just learning about this,” Clinton said in response to a question about whether a person with a beard and a penis could be considered a woman. “It’s a very big generational discussion, because this is not something I grew up with or ever saw. It’s going to take a lot more time and effort to understand what it means to be defining yourself differently.”

Reines returned to the topic of Hillary’s presidential aspirations and concluded with a very funny joke about impeachment.

“To some extent, she might as well run,” he said, referring to the rampant media speculation about her intentions. “She might be the best person to beat President [Mike] Pence. I’m sorry, I meant President Trump.”

Hacked emails published by WikiLeaks in 2016 revealed that Clinton campaign manager John Podesta and Center for American Progress president Neera Tanden agreed that Reines should probably be committed to a mental institution.

Top Hillary Clinton adviser Philippe Reines on whether Hillary has ruled out running for president in 2020: “No, she has not” pic.twitter.com/wLLItEF5Wo

The post Former Hillary Clinton Goon Says She ‘Might Be the Best Person’ to Beat Trump in 2020 appeared first on Washington Free Beacon.