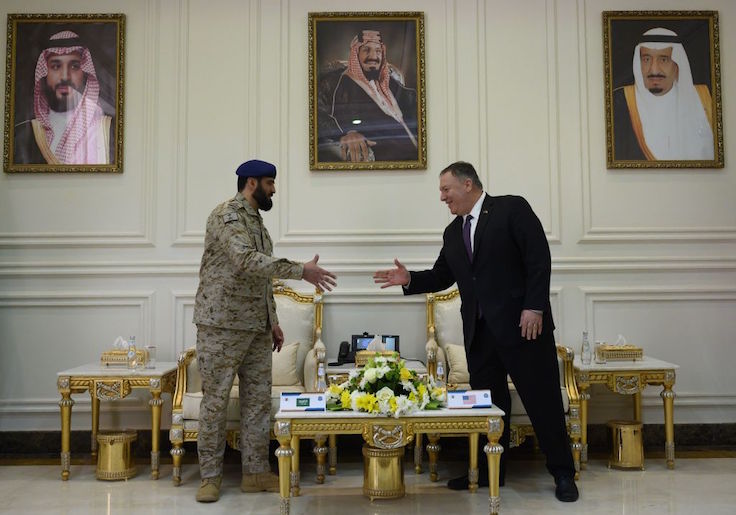 PRINCE SULTAN AIR BASE, Saudi Arabia—The United States is aggressively monitoring Iranian missile threats across the Middle East in close coordination with its Saudi Arabian allies, according to U.S. military officials who briefed the U.S. secretary of state during a Thursday visit to the country’s Prince Sultan Air Base.

More than 2,500 American forces entered the base in early January and quickly established a fleet of advanced F-15 tactical fighter jets to help the Saudis defend their country from increasingly severe Iranian missile strikes, according to the U.S. military officials who also briefed a group of reporters traveling with Secretary of State Mike Pompeo.

In addition to the fighter aircraft, the United States installed a set of Patriot surface-to-air missile systems to fend off potential Iranian strikes like the one in September 2019 on Saudi Arabia’s state-owned Aramco oil fields. That attack stirred the region and saw the Trump administration deploy thousands of troops to the Gulf country.

Pompeo, in an afternoon visit to the base, met with American military personnel and received classified briefings about the ongoing threat posed by Iran and its regional terror proxies. While Iran has not launched additional strikes on Saudi Arabia since the late September salvo, the United States’ continued presence in the region is a sign of how pressing and immediate the threat continues to be, Pompeo said in response to questions from the Washington Free Beacon.

“The fact that we’re here today, the fact that so many young American men and women are here and in other facilities not only here in Saudi Arabia, but in Iraq, indeed in Qatar … I think demonstrates that the demand for deterrence remains,” Pompeo said. “You need only look at the ayatollah’s Twitter feed to know that these are people who have a deep disdain for the very fundamental ideas that we hold so dear in the United States of America and their desire to wipe the state of Israel off the map and to do harm to the United States of America remains and our aim is to change that behavior from the regime.”

A crucial part of the United States’ plan for deterrence played out last month when President Donald Trump signed off on the airstrike that took out top Iranian general Qassem Soleimani.

While that strike prompted an Iranian military response, it also sent a clear message to the Islamic Republic, Pompeo said.

“I think it had multiple impacts,” Pompeo told reporters in a briefing held after he toured the base. “First is I think it demonstrated resolve. Not only for the United States but all of the forces that are working to push back against the Islamic Republic of Iran. He was actively plotting to kill Americans. He killed Americans … and I think that you can see that it’s now provided the Iranians with the knowledge that our notion of deterrence is real.”

Iranian hostility and intransigence on both the military and diplomatic fronts served to push the United States and Saudi Arabia into a close partnership.

“[Saudi Arabia was] in a position of realizing that as the temperature was going up in their own region, that they’re facing an opponent on the other side that is very, very large in terms of population and capability,” said John Abizaid, the U.S. ambassador to Saudi Arabia. “So they naturally turned to us for support, and our support has been defensive. They’ve never asked for offensive support. It’s always been defensive support.”

Iran’s increasingly provocative and violent military strikes on Saudi Arabia and in other areas of the region are the direct result of the Obama administration’s willingness to give Tehran a pass as it pursued the landmark nuclear accord, Pompeo said.

In addition to the boosted military posture, the Trump administration will continue applying economic sanctions on Iran, Pompeo said.

As part of this sanctions campaign, the administration announced Thursday morning that it is issuing new penalties against five members of Iran’s Guardian Council and its Elections Supervision Committee, which determine which candidates can run for political office. Already, hundreds have been disqualified by the committees as they seek to control the outcome of the country’s election results.

“The Trump administration will not tolerate the manipulation of elections to favor the regime’s malign agenda, and this action exposes those senior regime officials responsible for preventing the Iranian people from freely choosing their leaders,” Treasury Secretary Steven Mnuchin said in a statement. “The United States will continue to support the democratic aspirations of Iranians.”