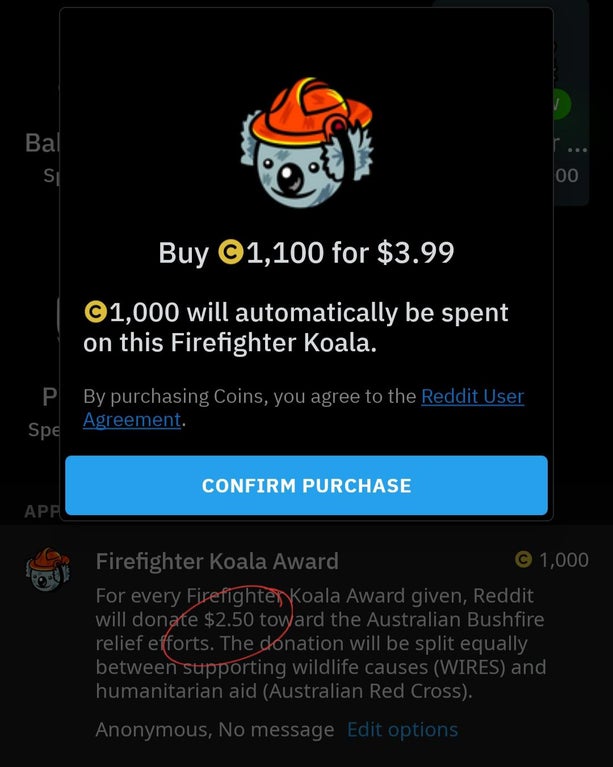 A time of crisis often makes people feel helpless for not being able to do much to help. Many turn to at least making donations – and this is something that allows charities to raise funds for disaster-struck areas, such as parts of Australia now ravaged by wildfires.

But it’s also what many commercial companies exploit to profit by (ab)using both the situation and the sentiment.

Case in point: Reddit. At least according to this post on the social network’s r/australia subreddit, the company is now “profiting off the fires.”

A screenshot attached shows an offer to users to buy 1,100 Reddit “coins” for $3.99. Of this, 1,000 would be automatically spent on a “Firefighter Koala Award.” And when a Redditor gives this award to another user – Reddit will donate $2.50 to one of the charities helping in Australia.

Something’s clearly not adding up here – at least not in a way that would suggest Reddit intends to actually use its heavily gamified “coins and awards” system to raise money and donate it. Instead, the company wants to take a good chunk of the funds collected through this particular deal and donate the rest – while no doubt, also counting on more people buying “coins” feeling that they are doing something to help. At the same time, this would boost engagement in the whole rewards scheme, as Redditors give out “Firefighter Koalas” to one another.

The post accusing Reddit of unethical behavior received 1.5k upvotes as of this writing, and nearly 150 comments – a large majority of which disapprove of the way the social network has chosen to show its charitable side.

Many are advising those able and willing to donate money to do it directly to the charities Reddit mentions, while others observed that those who already have some coins to spend could might as well now use them on the “Firefighter Koala.”

Users who see nothing particularly wrong with Reddit’s idea here think of it as a glass-half-full situation: at least the victims in Australia will get something from Reddit.

It’s worth noting that Reddit’s “coins” have no actual value and cost the company nothing to “make”: they are virtual “currency” that Reddit users can buy for real money, and then spend on several types of awards that are given to posts or comments they like so much that a simple upvote just won’t do.

The post Reddit slammed for trying to profit from Australian wildfires appeared first on Reclaim The Net.

In other news...
Instagrammer says he spent 5 days in jail after...
IMPACT Wrestling banned from Twitch after Rob V...
Amidst a lot of wrong, NCAE gets one thing righ...
Dental assistant says she was fired after writi...
This Australian Sniper is Now Leading a Fight t...
The Media Is Trying To Help Elizabeth Warren Bu...