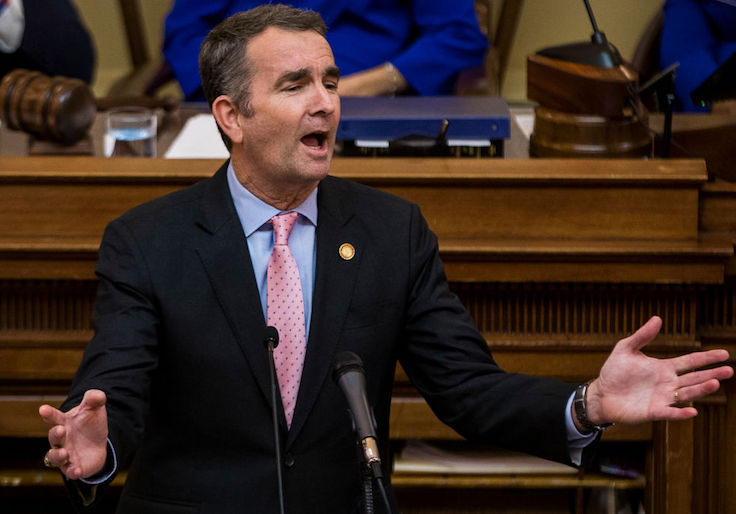 A major organizer of an upcoming gun-rights rally at the Virginia state capitol vowed to appeal a state judge’s ruling in favor of Democratic governor Ralph Northam’s temporary ban on guns on capitol grounds.

The judge wrote that Second Amendment rights are limited and that courts must defer to the executive branch when dealing with emergencies. She concluded that Northam had sufficient authority to issue the ban. “Because individuals have limited right to bear arms,” Taylor said in the ruling, “the Plaintiffs in this case will not suffer an irreparable harm sufficient to justify the injunction sought by the Plaintiffs.”

Van Cleave described the ruling as “bizarre” and criticized it for ignoring the gun-rights group’s central claims.

The legal confrontation is the latest skirmish over the effort by Virginia Democrats—who recently won control of the state government—to enact new gun-control laws. Northam has framed the order as necessary to ensure public safety at the gun-rights rally VCDL has slated for Monday in Richmond, especially in light of the arrest of three individuals alleged to be planning violence. But VCDL has contended that the ban is not only unconstitutional, but an attempted “smear” of gun owners. The outcome of the suit could test the limits of the governor’s powers, and will likely drive up the rally’s turnout, already expected to be high.

The dispute stems from a 2012 law that limits the governor’s ability to use emergency powers to ban gun carry. That law stipulates that emergency powers do not give the governor the power to “in any way limit or prohibit the rights of the people to keep and bear arms” and specifically includes the lawful carrying of guns. However, it provides exceptions for ensuring “public safety in any place or facility designated or used by the Governor, any political subdivision of the Commonwealth, or any other governmental entity as an emergency shelter or for the purpose of sheltering persons.”

Northam’s office did not respond to a request for comment on the legal basis for the order.

Northam said in his executive order “available information” indicates a “substantial number” of those planning to attend Monday’s rally are coming from out of state with the intention of causing “violence, rioting, and insurrection.” He further argued the temporary ban was necessary to ensure that the Virginia capitol grounds, where the rally will occur, are “sheltered safe places.”

“Assuring that Virginia’s Capitol Square and surrounding public areas are sheltered safe places for those who come to participate in the democratic process, as well as those who work on or near Capitol Square, is my greatest priority,” Northam’s order said. “The anticipated effects of the potential convergence of tens of thousands of demonstrators on Capitol Square, some of whom may not come to assemble peacefully, constitutes an emergency.”

The gun-rights groups argued that the very provisions in state law the Governor invoked actually bar him from issuing the ban. They also contended that the order violates the United States and Virginia constitutions.

“Neither statute relied on by the Governor comes close to providing him the authority that he purports to exercise in the EO,” the groups said in the initial suit. “On the contrary, they expressly prohibit the Governor’s actions.”

The FBI on Thursday arrested three alleged extremists and accused them of illegally transporting firearms with the intention of committing a felony in connection with Monday’s rally. The three are alleged to be members of a violent neo-Nazi group. One of the men, a Canadian, is also accused of illegally crossing the border in hopes of inciting racist violence in the United States.

Northam said in a speech announcing the order that his intention was to prevent the kind of violence experienced in Charlottesville, Va., in 2017 when racist groups clashed with counter-protesters, and a car attack resulted in the death of 32-year-old Heather Heyer. Northam said threats from extremist groups outside the state were enough to justify temporarily banning all weapons, including firearms, from capitol grounds. He acknowledged that the people organizing the event were doing so legitimately and were not connected to the extremist groups. Northam went on to compliment an NRA-organized event in Richmond earlier this week which occurred without incident.

In an email to supporters, VCDL questioned whether a large number of out-of-state extremists are planning to commit violence at Monday’s rally and said neither the governor nor law enforcement had informed the group of any threats.

“The Democrats are afraid of the voters and want to portray this peaceful assembly of law-abiding gun owners in the worst possible way,” the group said. “They would love for it to degenerate to ‘violence, rioting, and insurrection’ in order to smear gun owners.”

The group noted that it has conducted similar protests annually since 2002 without any violent incidents, adding that “the only difference” was the expectation of a substantially larger crowd size, “due to the Democrat leadership’s promise to pass draconian gun control laws that would adversely affect law-abiding citizens while having minimal impact on criminals.” The group condemned violence, emphasizing that it would be harmful to its political goals, and called on members to report anyone attempting to incite violence to the police.

The appeal in the case against Northam’s emergency gun ban will likely be heard in short order, as the ban goes into effect on Friday afternoon. The gun-rights groups are still hoping to block enforcement of the ban ahead of Monday’s rally.