Viewers of the 2023 Grammy Awards have been taking to social media to express outrage over a “demonic” and “satanic” performance.

During the ceremony on Sunday night, Sam Smith and Kim Petras performed their award-winning single, “Unholy.”

The pair took to the stage shortly after winning the award for Best Pop Duo/Group performance.

However, the awards took a disturbing turn when their performance drew horrified reactions from onlookers.

Smith, who claims to be “non-binary” and expects people to address him with “gender-neutral” pronouns, appeared to be dressed as Satan.

He was seen wearing satanic headgear throughout the “demonic” scenes.

Viewers flocked to social media to share their frustrations about Smith’s “devil-worshiping performance.”

One tweeted: “I know we on the right probably use the word satanic too often but this performance from Sam Smith is literally a tribute to Satan.”

I know we on the right probably use the word satanic too often but this peformance from Sam Smith is literally a tribute to Satan. pic.twitter.com/1GrNgjssZN

Another Twitter user added: “You don’t have to be super religious to be disturbed by that Sam Smith devil-worshiping performance.”

One viewer stated: “That Sam Smith performance was weird I had to look away like why artists so obsessed with the devil????”

“How you go from those tributes to Sam Smith dressed as a devil?” one viewer asked while another tweeted: “That devil worshipping performance was trash.

“And it’s been done so many times. I’m disappointed af.” 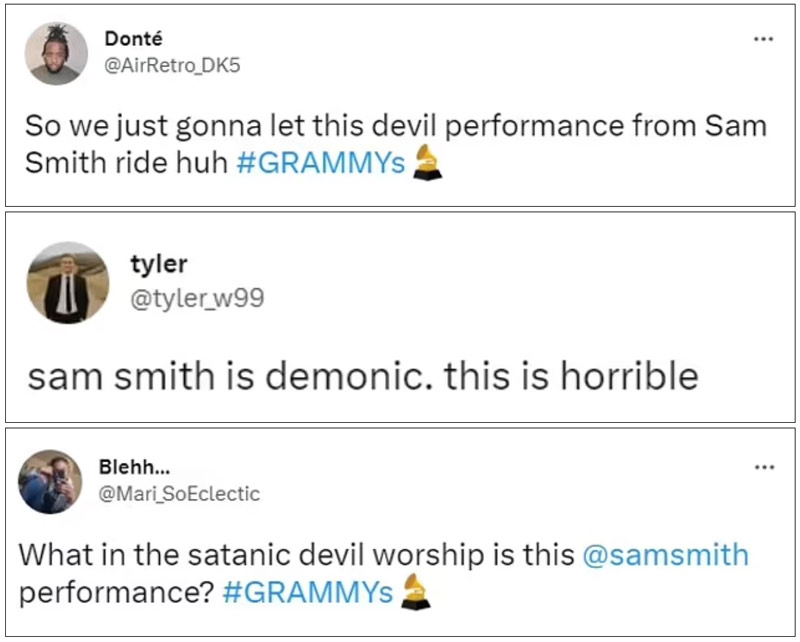 One frustrated music fan added: “I’m really so sick of the satanic and demonic references…even with the hypocrisy — I still wanna know WHY Nicki, Sam Smith, Lil Nas X, and so many others reference the devil.”

Another agreed as they stated: “So many devil horns tonight, first Sam SMITH, now Steve Lacy. 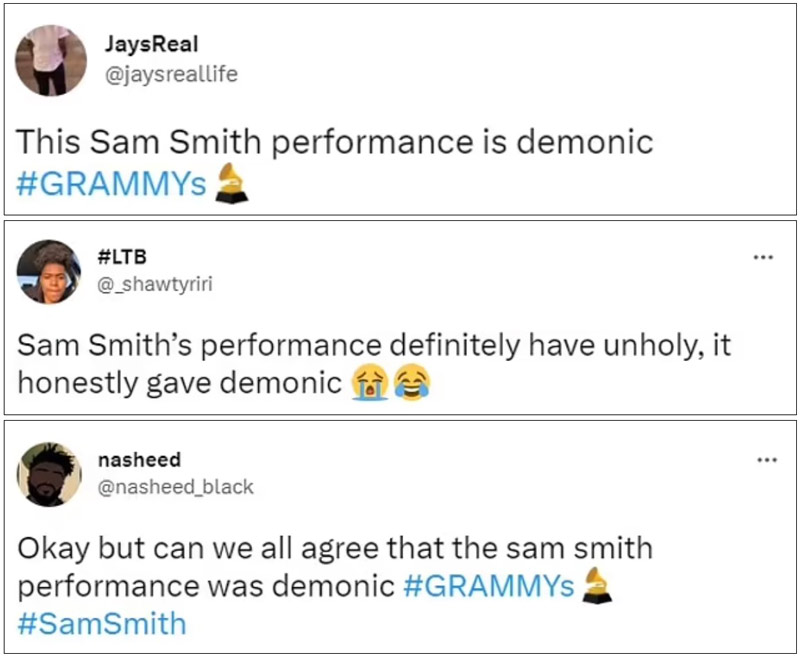 After the performance, host Trevor Noah immediately joked about the fact the satanic themes would outrage some viewers.

Pretending to be on the phone with his mother, he was heard saying: “No, mom, it wasn’t the actual devil…

“Yeah, you did warn me about Hollywood.”

As Hollywood celebrities in the audience laughed along, Noah “ended” the call and stated: “She said she’s praying for all of us.”

Click this link for the original source of this article.
Author: Frank Bergman

This content is courtesy of, and owned and copyrighted by, https://slaynews.com and its author. This content is made available by use of the public RSS feed offered by the host site and is used for educational purposes only. If you are the author or represent the host site and would like this content removed now and in the future, please contact USSANews.com using the email address in the Contact page found in the website menu.