The SouthFront Team received a letter from one of our readers from England. He takes part in the UK Government Homes For Ukraine initiative and hosts a young couple of refugees from Ukraine.

On January 30, he received an official letter from the Department of Equalization, Housing and Communities. The host was demanded to provide the following personal data of his guests:

In their turn, the refugees have to visit the Ukrainian embassy to “specify their personal data individually”. 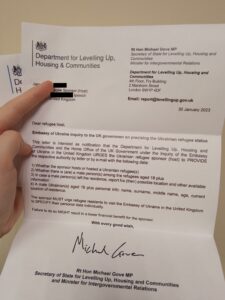 Our reader wondered what was the reason for collecting such data about his guests:

I’m James. I reside in Ipswich, East England. I’ve been part of the UK Government Homes For Ukraine initiative for 5 months now. I am hosting a sweet couple from the city of Lviv or something like that, a young lady and her husband. Both in their late 20s. They have already found a job and we get on well together. They are simply nice people but that’s not the point of the story.

Just a couple of days ago I received a letter from the department for leveling up, housing & communities that told me to report the authority a certain data on my guests. I will obviously do that, but I just don’t really get the reason why should I. Moreover, it looks like B… (the lady’s husband, the refugee) must now visit his country’s embassy in London for only God knows what reason. The letter reads ‘Embassy of Ukraine enquiry’.

What does that ‘inquiry’ mean? Why would Ukrainian embassy gather such data? Does anybody know what is it all about?

I hope this email finds you and you would be kind to post it on your platform!

Obviously, this is not just a survey on Ukrainian refugees. The fact that the embassy is interested exclusively in Ukrainian men over the age of 18 indicates that this measures are taken amid some mobilization procedures. It is likely that the Kiev regime is starting to look for new soldiers among refugees abroad amid the ongoing preparations for the spring offensive on the fronts which was recently announced by Biden.

Earlier, the National Bank of Ukraine predicted that at the beginning of 2023 the total number of refugees from the country will increase to nine million people. Which is probably a fairly modest forecast.

The general mobilization of Ukrainians continues amid fierce fighting along the entire front line of Donbass, heavy losses of the Ukrainian Army and the outflow of foreign mercenaries. For example, on January 1, the founder of the private military company “Mozart” Andrew Milburn recognized the victory of the PMC “Wagner” and announced that his mercenaries are leaving Ukraine.

The AFU mobilizes people of older age groups, with chronic diseases, who have not served in the army, that is, those categories of the population who are unlikely to be good soldiers. Raids on Ukrainians of combat-ready age continue on the streets throughout the country. LINK, LINK 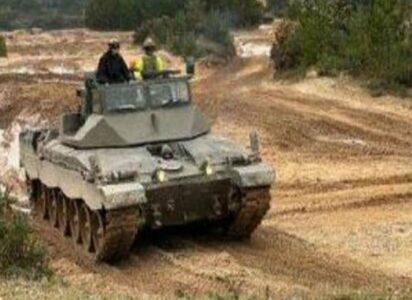 At the same time, the search for soldiers abroad may be an attempt to facilitate military supply chains to Ukraine and training of Ukrainian soldiers abroad. Ukrainians who are currently being hunted by the embassy can be mobilized to undergo training in the UK and join the crews of Challenger 2 tanks and participate in other exercises. So the refugees will soon return to their country, but already as part of combat units.

Click this link for the original source of this article.
Author: Anonymous103

...
Editors Pick: Watch While Still Free- ‘State Of Control’ Documentary – If They Win,This I...
Data Point – When Citizens Believe that GOVERNMENT Is Their Largest Problem…
Biden Regime Quietly Frees One of 9/11 Terrorist Planners from Gitmo
Horrified Satan Distances Self From Grammys
Hunter Biden Admits: Laptop is Mine
BP joins Big Oil profit bonanza