BELFAST — The UK is “confident” a mechanical issue that shut down its newest aircraft carrier for the last five months is not a class-wide design flaw, and believes the ship could return to service as soon as this fall, top officials said this week.

A starboard propeller shaft fault forced the second Royal Navy Queen Elizabeth class aircraft carrier, Prince of Wales, to break down in August 2022, just one day after departing its home base of Portsmouth, England, for training exercises with the US.

Dry dock repairs to fix the starboard shaft have been ongoing in Rosyth Dockyard, Scotland, since October and are expected to finish in the spring before the carrier returns to operations months later.

Based on “appropriate checks” on starboard and port shafts from sister ship, the Queen Elizabeth, “we’re confident that there is not a class issue with the carriers,” said Rear Admiral Paul. Marshall, Senior Responsible Officer (SRO) for Type 31 Frigate and Fleet Solid Support (FSS) ship programs at the Royal Navy. The carriers are jointly manufactured by Babcock, BAE Systems and Thales.

The Prince of Wales port shaft is also undergoing repair, in conjunction with the carrier’s starboard fault, said Marshall, during a Jan. 31 UK defense committee hearing. Once the repairs conclude, the 72,000-ton ship will return to base in Portsmouth to undergo planned maintenance and “re-join operations” in fall 2023, he said.

Though they’ve determined it’s unlikely a class-wide issue, the Royal Navy is still currently carrying out an investigation to understand the “root cause” of the propeller shaft problems. Marshall revealed the probe is almost complete but said it would be inappropriate to discuss any conclusions before lawmakers were first briefed.

Last year’s planned HMS Prince of Wales voyage to the US was hailed by the Royal Navy as a “landmark mission to shape the future of stealth jet and drone operations off the coast of North America and in the Caribbean,” before being prematurely aborted after discovery of the starboard shaft fault.

A previous US deployment was similarly cancelled after the carrier was forced to undergo a six month repair, at cost of £3.3 million ($4.07 million) after suffering an engine room internal flood.

As set out by the UK’s Integrated Review in March 2021, the Prince of Wales has been developed to shape defense and deterrence across the Euro-Atlantic area. The UK has also committed to make a Carrier Strike Group, led by the Prince of Wales or Queen Elizabeth, “permanently available” to NATO.

When the Royal Navy assumed one year leadership of the alliance’s Maritime High Readiness Force in January 2022, the Prince of Wales served as the NATO Command Ship, up until the starboard shaft technical issues prevented any further contribution to the cause.

The carrier can accommodate a crew of up to 1,600 and can carry 36 F-35B fifth generation fighter jets and four Merlin submarine hunting helicopters, according to the Royal Navy.

Pushing Back The Glasgow

Meanwhile, a misjudged engineering forecast has led to an initial operating capability target for Type 26 first in class frigate HMS Glasgow being delayed by a year to 2028, the defense committee also heard. 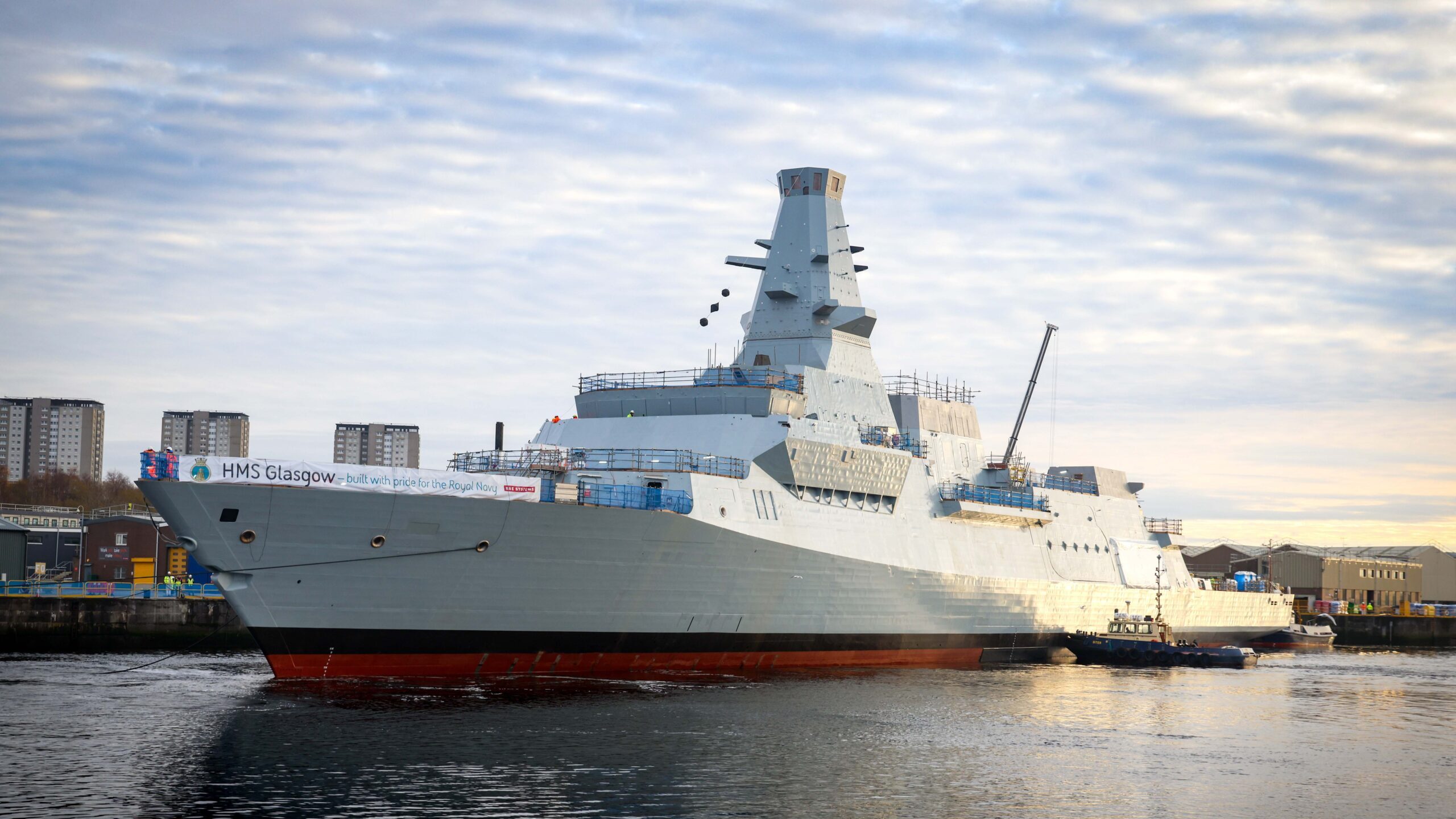 Roberts also admitted that supply chain issues have had an adverse impact on the effort, revealing that there were “some pieces of equipment” that were unavailable during design and build “forecast dates.”

The industrial setbacks were first disclosed by UK Defense Secretary Ben Wallace in a statement to Parliament in November 2022, where he revealed that the Type 26 acquisition will rise over budget by £233 million ($287 million), an increase of 4.2 percent, compared to original funding figures.

As a result of cost overruns and the procurement delay, prime manufacturer BAE Systems will receive a “reduction in their fee,” in line with the structure of a target cost incentive contract signed with the Royal Navy, said Roberts.

“The actual figure [amount of money forfeit by BAE] is commercially sensitive but its in the tens of millions,” he said.

In a statement, a BAE spokesperson told Breaking Defense, “the fee reduction has no impact on delivering the Type 26 programme through to completion” and the company “continue[s] to make good progress on all the Type 26 frigates currently in build.”

BAE also expects “to see the build schedule accelerate as we move through the construction of each of the remaining ships and invest significantly in our Glasgow shipyards,” added the spokesperson.

“As with all first of class vessels, we are constantly implementing our learnings to improve the design and construction processes and strengthen supply chains.”

As part of a float off process in December 2022, Glasgow was lowered from a barge and submerged in deep water for the first time in Glen Mallan, Scotland, before being towed to BAE Systems Scotstoun shipyard for additional outfitting, ahead of testing and commission.

The Type 31 acquisition remains “on track” to deliver all five ships by 2028, said Marshall, but added that “tricky elements” including the integration of combat systems are still to take place.

“We are in the process of building integration facilities,” to support systems integration, at Portsdown Technology Park, Portsmouth, he added.

Type 31 first in class Venturer will be put to sea in 2023 so outfitting of other systems can start, followed by integration of the combat systems, with a test and trials period also lined up.

“Integrating the combat system and the test and trials period with the first class always takes a little bit longer, but we’re confident that in learning lessons, we can then deliver the full program more effectively,” explained Marshall.

Babcock’s Arrowhead 140 design, which the Type 31 is based on, has been selected for Poland’s three-ship Miecznik frigate program, a second export order behind manufacturer Babcock securing a contract for two ships from Indonesia.

Click this link for the original source of this article.
Author: Tim Martin