An investigation into shadowy methods employed by the UK government during the pandemic, that resulted in a report by rights group Big Brother Watch titled, “Ministry of Truth: The Secretive Government Units Spying On Your Speech,” deals with how various units were used to record political dissent on social, but also traditional media.

All this was justified by the need to combat “misinformation,” the organization learned and deduced from whistleblower accounts and thanks to Freedom of Information Act queries.

The government didn’t hesitate to include some military units in this “Covid misinformation crusade” – while on the receiving end stood academics, MPs, politicians, activists, as well as journalists.

The report says that four units operate as the government’s social media “special forces,” each tasked with a distinct purpose.

And one of them apparently had the job of pressuring news outlets seen as challenging Covid measures, or those who printed stories understood as risking lower compliance with those measures.

The Cabinet Office’s Rapid Response Unit (RRU) came up with weekly reports on various issues, including on “Vaccine Hesitancy” when that became a hot topic in 2021. The citing of tweet engagement numbers enjoyed by vaccine and lockdown skeptics suggests the Cabinet Office “engaged in the systemic monitoring of individuals who are critical of government policies in what was a controversial policy area.” 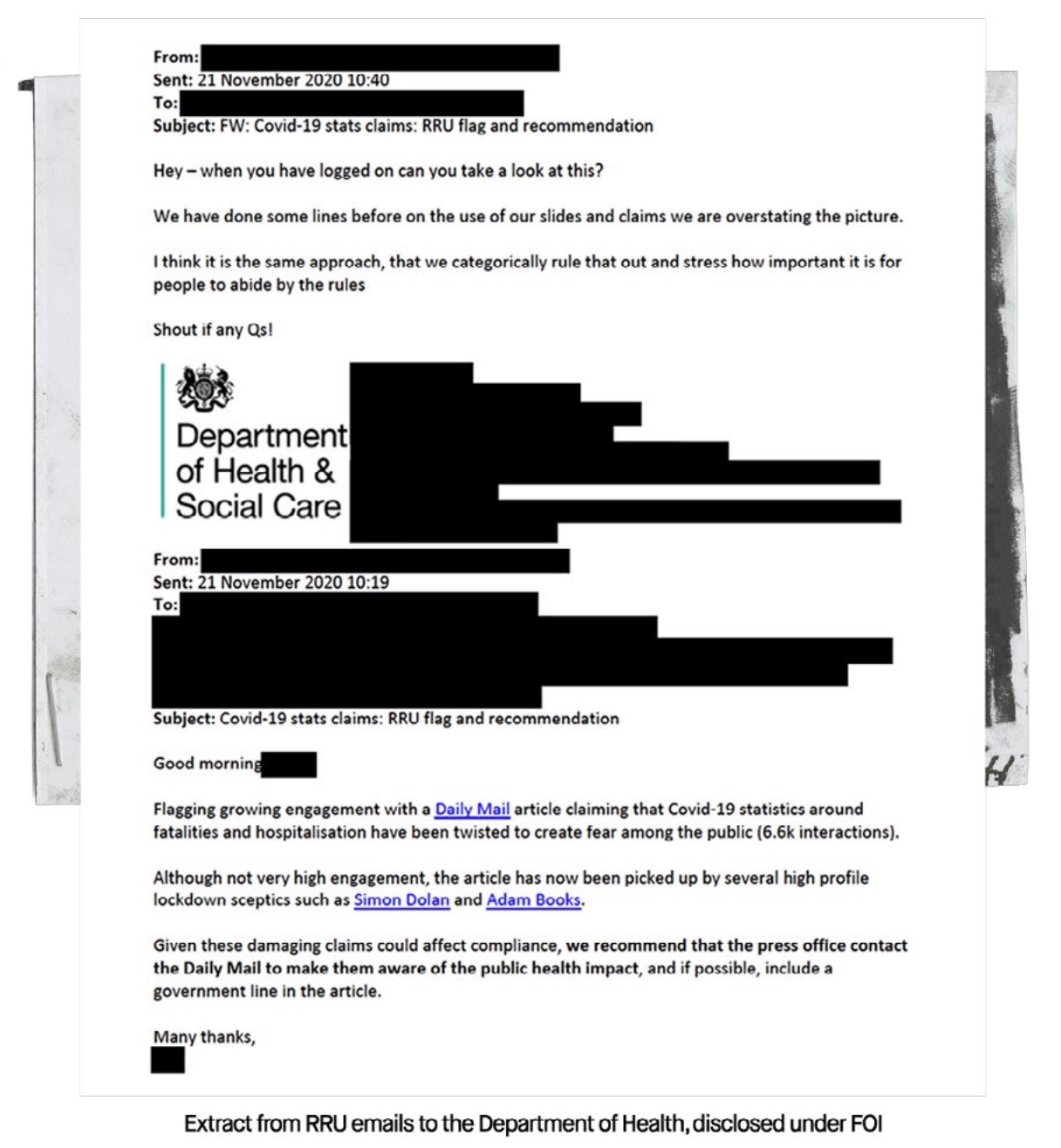 In addition, responses to several Freedom of Information Act questions suggest that the RRU (that said opposition to the vaccine rather than to mandatory vaccination was analyzed) conflated “opposition to coercion with vaccine hesitancy,” the Big Brother Watch report notes.

Meanwhile, RRU’s own report to the government singles out in two places TalkTV journalist Julia Hartley-Brewer and Reform UK leader Richard Tice as vaccine skeptics, because of a tweet they shared of a Telegraph article about the opinions voiced by the Health and Education secretaries at the time, who said students would “lose out on face-to-face lessons if they don’t get vaccinated.”

RRU is criticized for using pejorative language to speak about critics among journalists, and in particular, in the two mentioned cases, for failing to understand their opposition was not to the vaccine itself, but to “the coercive message from ministers.”

It didn’t help, either, that Hartley-Brewer shared with her radio audience that she had been vaccinated not once, but twice. Her name was still mentioned negatively in RRU reports not twice, but, as Big Brother Watch put it, “many times.”

The post UK government pressured news outlets that published articles that could “affect compliance” with Covid measures appeared first on Reclaim The Net.

...
VIDEO: Is Alexa Predicting the Start of World War III?
LeoLab’s newest space tracking radar expands Indo-Pacific coverage
Inspector Government
EXCLUSIVE: The Federal Government Is Tracking Unvaccinated People Who Go To The Doctor An...
Could the ATF Abolish the Second Amendment
Russia Warns Biden: This Could Start WW3
You Might Like...