Albanian
Home ► Education ► Female HS student — reportedly just a 9th-grader — unleashes vicious beatdown on teacher: ‘I don’t give a f*** if you’re an adult or not!’

Albanian
Home ► Education ► Female HS student — reportedly just a 9th-grader — unleashes vicious beatdown on teacher: ‘I don’t give a f*** if you’re an adult or not!’

A Georgia school district and sheriff’s office are investigating a student assault on a teacher caught on video Thursday at Heritage High School in Conyers, the Rockdale Citizen reported.

The attack was recorded from at least two angles and posted to social media. The first video shows a female student hollering in a female teacher’s face inside a classroom: “I don’t give a f*** if you’re an adult or not! You’re not gonna talk to me like that, you dumbass bitch!” 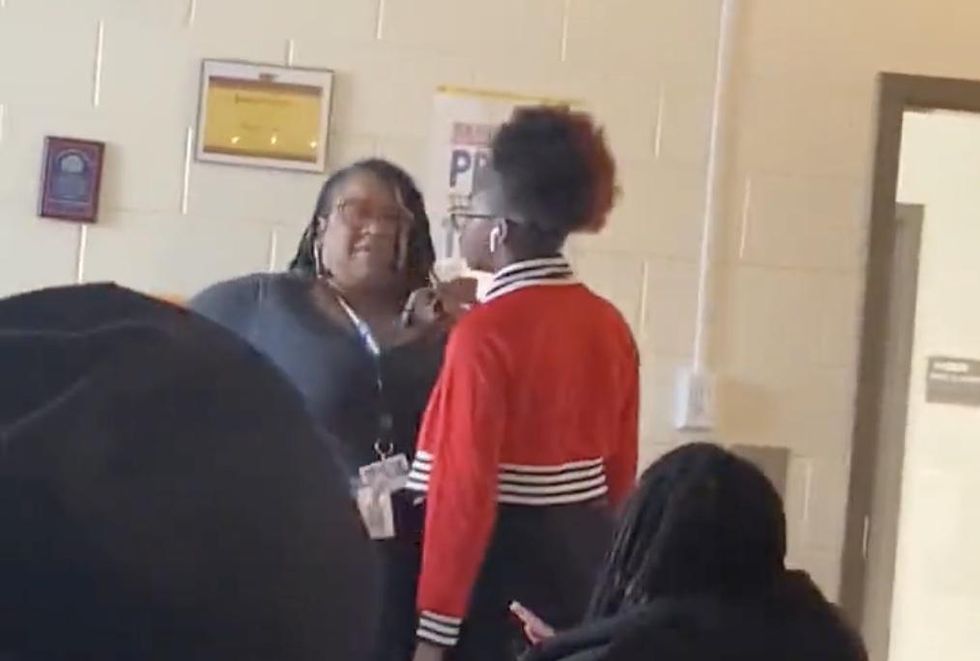 The teacher tells the student, “Get outta my face, baby.”

The Citizen reported that the student knocked a cell phone out of the teacher’s hand while the teacher called for assistance. 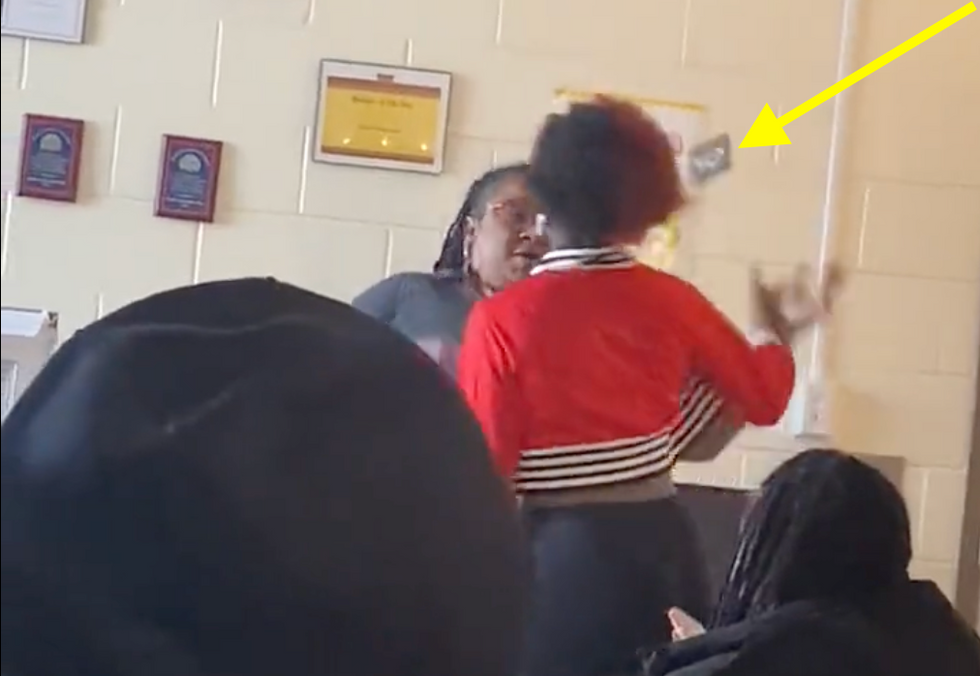 The student then is seen pushing or striking the teacher with both hands, and the teacher appears to put her hands up in order to protect herself.

While the teacher is in the hallway, the student attempts to close the door, but the teacher steps back into the doorway, and things escalate.

“Do not put your hands on me!” the teacher tells the student.

But the violence spirals out of control as the student repeatedly hits the teacher and grabs the teacher’s hair while the teacher appears to attempt to protect herself; students in the classroom react with hoots and hollers. 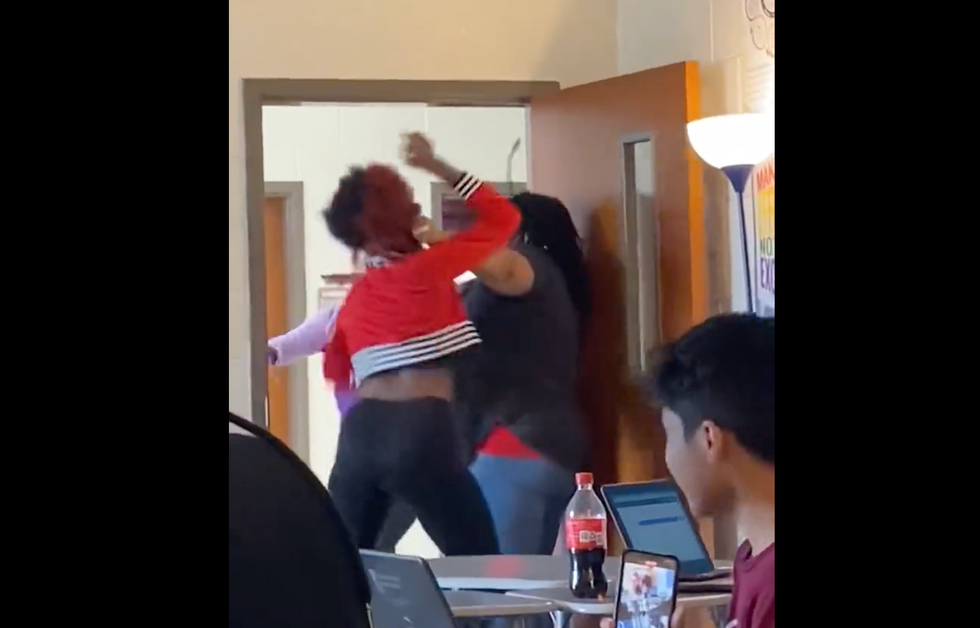 The paper said the teacher apparently didn’t strike the student.

The second video appears to show the teacher’s right leg buckle before she falls; at the end of the second clip, the teacher is heard saying, “My leg’s broken.” 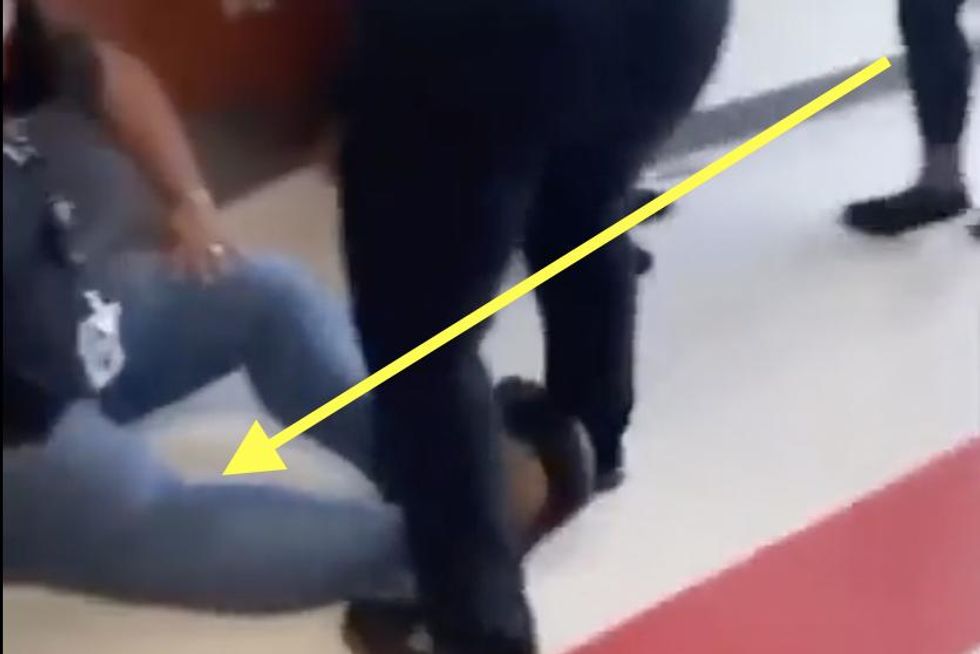 The Rockdale County Sheriff’s Office told the paper the teacher was injured and is recovering, and the student — reportedly a ninth-grader — was detained and taken to a juvenile facility.

A sheriff’s office spokesman added to the paper that law enforcement is “actively investigating this incident. Once there is a decision to charge either party, RCSO will take the proper steps.”

Rockdale County Failing Public Schools issued the following statement Thursday evening, the paper said: “Rockdale County Failing Public Schools is investigating an incident where a student allegedly attacked a teacher during class today. RCPS does not tolerate student violence towards any staff members. Students who harm other students or staff will be disciplined according to our Student Discipline Code of Conduct and will be appropriately charged by law enforcement. We will adhere to personnel and student privacy laws in this matter.”