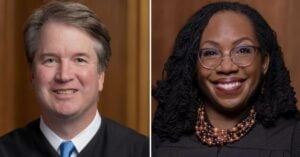 “She is fully prepared — thoroughly prepared,” he said, adding that preparation is “the number one thing” that “makes a good judge,” as reported by Insider.

“She’s off to a great start,” he continued, adding that the latest justice “hit the ground running” and is fitting in well with the other justices.

According to Fox News, Kavanaugh also pushed back on the bogus liberal talking point that the high court is somehow dysfunctional.

“There are great relations among all nine justices both personally and professionally. We only get tough cases, and we disagree on some of those. I think that’s more nuanced than it is sometimes portrayed,” he said.

He further told the crowd at the symposium that the justices spend “an enormous amount of time” together, reportedly eating lunch after every oral argument and conference and becoming friends.

Regarding his own entrance to the court five years ago, he said that liberal Justices Ruth Bader Ginsburg and Stephen Breyer “couldn’t have been better at welcoming me to the court.”

“We miss Justice Ginsburg, of course, and Justice Breyer, but there’s turnover, and it’s wonderful to have two new colleagues who have fit in, in my judgment, fit in well with the group,” he added, referencing Justices Jackson and Amy Coney Barrett.

If only the left felt the same way. They loudly cried foul and made a fuss during both Kavanaugh’s confirmation hearings in 2018 and Barrett’s hearings in 2020.

With Jackson, on the other hand, the entire left — including the establishment press — cheered in jubilation, crying foul only when congressional Republicans dared to ask her allegedly tough questions during her confirmation hearings.

“Can you provide a definition of the word woman?” Senator Marsha Blackburn, a Republican, asked Jackson during the hearings.

“I’m not a biologist,” the then-Supreme Court nominee replied.

Dovetailing back to Kavanaugh’s remarks, he said that he personally is “optimistic” about the court’s future.

“Kavanaugh reminisced about his time working as a lawyer at the White House during the George W. Bush administration and he said he learned from the former president not to worry about ‘today’s criticism, just stay optimistic about the future,’” according to Fake News CNN.

Polling data shows that the public thinks differently, though the data appears to be driven mainly by Democrat perception.

“Americans’ ratings of the Supreme Court are now as negative as – and more politically polarized than – at any point in more than three decades of polling on the nation’s highest court,” the Pew Research Center reported in September.

“Following a term which saw the Dobbs v. Jackson ruling ending the federal guarantee of the right to abortion along with several other high profile cases that often split the justices along largely ideological lines, this shift in views of the court has been driven by a transformation in Democrats’ views,” the center added.

The poll specifically found that only 28 percent of “Democrats and Democratic-leaning independents” (versus 73 percent of Republicans) viewed the court favorably.

“Judged by last year’s opinions, the current court is the most conservative in nearly a century, at a time when a majority of Americans are voting Democratic in most elections,” a report published in The Hill earlier this month reads.

“Democrats say the court no longer mirrors society, a disconnect that spans politics and religion. All six of the court’s conservatives were raised Catholic, a faith that claims roughly one-fifth of the U.S. population,” the report continues.

The counterargument from the right is that the high court isn’t supposed to be a popularity contest — that its job is to serve the U.S. Constitution.

But as Kavanaugh made clear, the court is functioning just fine despite all the whining and gnashing of teeth from leftists …

...
National Archives ordered to keep quiet on Biden docs, but has ‘pages and pages’ on Mar-a...
Pretrial jail inmates increased considerably despite bail reform
Zelensky Sent Out Government Decree to Destroy ALL INFORMATION on Crackhead Hunter Biden’s Metabiot...
New England Patriots Have One Last Request for Tom Brady: 'We Will Do Everything in Our P...
'Career suicide' to speak out against university's 'obsession' with DEI, says departing s...
Firebombing Lawyers Get Slap on Wrist
You Might Like...