“Political language — and with variations this is true of all political parties, from conservatives to anarchists — is designed to make lies sound truthful…”

“And if a house be divided against itself, that house cannot stand.” -Mark 3:25

What a better way to divide and confuse a people, only to then conquer them by deceiving them into believing that there is a two-party system of government in this country.

Friends, our institution of government is set in place as a Constitutional Republic (Article IV, Section 4 U.S. Constitution).

What we, as a people, see on display, and that on a daily basis, is a bunch of clowns (actors) in the circus of politics acting under the illusion that they are arch enemies fighting each other to get it their way (Matthew 7:16).  As if to suggest that there is a right versus a left.  I am here to tell you that there is NO such things.  Because the American people refuse to get back to the law, they are being duped out of their freedoms by playing to the dupes of ill-designing men (Ephesians 4:14).

Today, there are over 101 unconstitutional party affiliates and not a one of them falls in line with the United States Constitution.  The current system of government is designed to strip you of your God-given rights.  It’s divide and conquer (Psalm 94:20).

Recently, I saw a post to help people understand how this system of deception is set up today and the man nailed.  I know that I have explained this 10 different ways, but let me now show you another example because I know that visual examples do help.

He is spot on, and the visual below will also help you to understand.  Notice where the public is at, the fish in the claws of the hawk.

See, we have the mainstream media working hand in glove with the deceptive two-party system in helping to fuel this narrative hoping to undermine the American people (Isaiah 28:18). 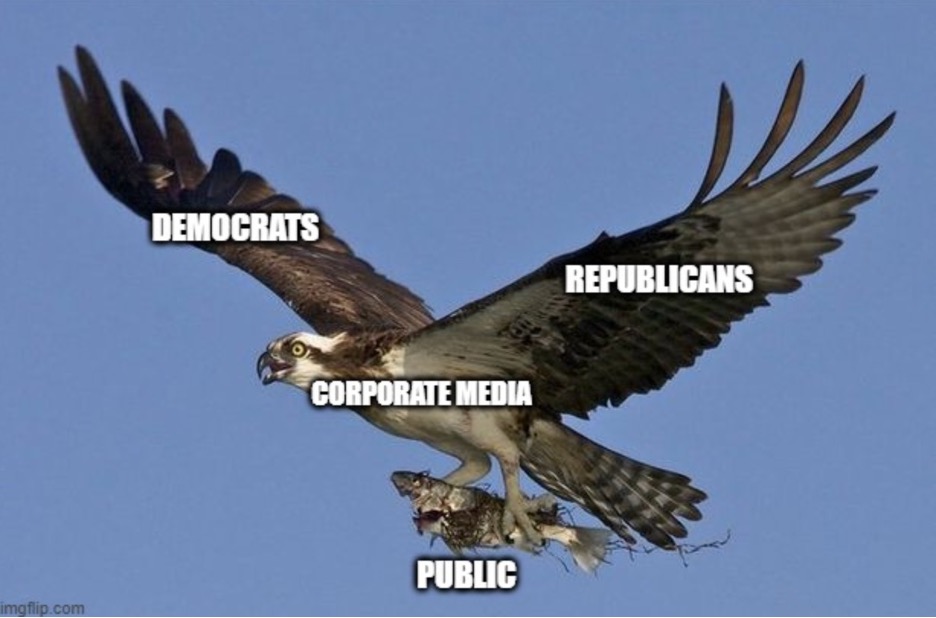 In conclusion: If the right was doing the right thing all of the time, there would not be a left (Matthew 5:13)!

The post This Guy Is Exactly Right – Visuals Help appeared first on The Washington Standard.

Click this link for the original source of this article.
Author: The Washington Standard