We gather the news that is the most important to you. As the most reliable and balanced news service on the internet, Unite America First offers the following information published by FOX NEWS:

FIRST ON FOX: A coalition of 20 states and a top conservative legal group is suing the Biden administration over its recently-expanded humanitarian parole program that allows tens of thousands of migrants from designated countries a month into the U.S. — arguing that the program is unlawful.

The lawsuit, filed by Texas and America First Legal in the Southern District of Texas, is joined by 19 additional states who are seeking to block the Biden administration’s parole program which allow up to 30,000 migrants from Haiti, Nicaragua, Cuba and Venezuela into the U.S. each month.

The Biden administration announced the program for Venezuelans in October, which allowed a limited number to fly directly into the U.S. as long as they had not entered illegally, had a sponsor in the U.S. already and passed certain checks.

“We anticipate this action is going to substantially reduce the number of people attempting to cross our southwest border without going through a legal process,” he said.

In the lawsuit, led by Texas and America First Legal and joined onto by 19 additional Republican-led states, plaintiffs argue that the program is illegal given the “exceptionally limited” parole power available to the federal government.

The lawsuit notes that parole is limited by Congress to be used on a “case-by-case basis for urgent humanitarian reasons or significant public benefit” — a standard which the lawsuit says the program fails to meet.

“The parole program established by the Department fails each of the law’s three limiting factors. It is not case-by-case, is not for urgent humanitarian reasons, and advances no significant public benefit. Instead, it amounts to the creation of a new visa program that allows hundreds of thousands of aliens to enter the United States who otherwise have no basis for doing so. This flouts, rather than follows, the clear limits imposed by Congress.”

The Biden administration has said the program is one of a number of ways it is expanding lawful migration pathways as a way to combat the ongoing migrant surge at the border that has seen historic numbers hit the border each month –and is calling on Congress to pass a broader immigration reform bill.

Separately, it has used humanitarian parole to allow Afghans and Ukrainians into the U.S. in the last year. But conservative critics have said the latest program is illegal, and facilitates rather than stops the migrant surge.

The lawsuit says that the program is also unlawful as it did not engage in the notice-and-comment rulemaking required by the Administrative Procedure Act — by which a number of immigration policies have been at least temporarily struck down in recent years. It also argues that the states “face substantial irreparable harms from the Department’s abuse of its parole authority, which allow potentially hundreds of thousands of additional aliens to enter each of their already overwhelmed territories.”

“Every state in America, especially border states like Texas, is being crushed by the impacts of illegal immigration,” Texas Attorney General Ken Paxton said in a statement to Fox News Digital. “The Biden open borders plan has created a humanitarian crisis that is increasing crime and violence in our streets, overwhelming local communities, and worsening the opioid crisis. This unlawful amnesty program, which will invite hundreds of thousands of aliens into the U.S. every year, will only make this immigration crisis drastically worse.”

The lawsuit also marks the latest in a flurry of legal challenges to the Biden administration’s policies by America First Legal — a conservative legal group launched by former Trump White House official Stephen Miller, who he described as being “at the forefront of the legal battle to save America’s borders from complete annihilation at the hands of this lawless administration.”

Miller labeled the Biden program as “pre-amnesty for what would be illegal aliens before they even arrive at our border.” He also compared it to the Obama-era Deferred Action for Childhood Arrivals program, which granted protection from deportation to illegal immigrants who came to the U.S. as minors. 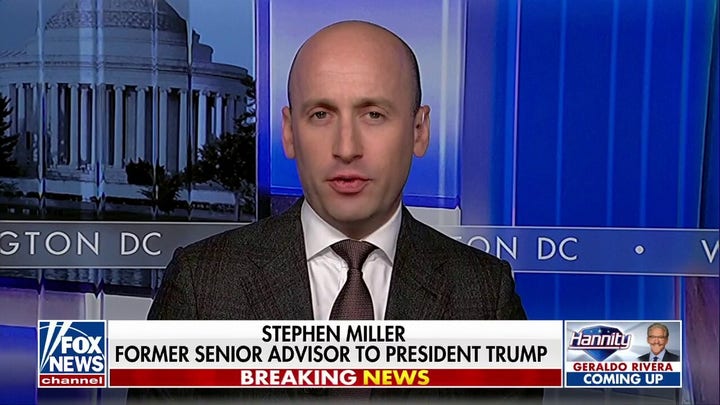 “This is a dramatic escalation in the open borders crusade – not only is Biden freely admitting illegal aliens who arrive at our borders, but he is now going to foreign countries to pre-approve innumerable illegal aliens to flood into our country without any legal basis whatsoever. It is illegal, unconstitutional, and contemptible,” he said.

The new parole program came after more than 250,000 migrants were encountered at the southern border in December, a new record. However, the Biden administration has said it believes that the new measures are already having an effect and that there has been a drop in migrant encounters at the border from those nationalities.

“The December update shows our new border enforcement measures are working. Even as overall encounters rose because of smugglers spreading misinformation around the court-ordered lifting of the Title 42 public health order, we continued to see a sharp decline in the number of Venezuelans unlawfully crossing our southwest border, down 82% from September 2022,” acting Customs and Border Protection (CBP) Commissioner Troy Miller said in a statement last week. “Early data suggests the expanded measures for Cubans, Haitians and Nicaraguans are having a similar impact, and we look forward to sharing the additional data in the next update.

Click this link for the original source of this article.
Author: Will Johnson

This content is courtesy of, and owned and copyrighted by, https://uniteamericafirst.com and its author. This content is made available by use of the public RSS feed offered by the host site and is used for educational purposes only. If you are the author or represent the host site and would like this content removed now and in the future, please contact USSANews.com using the email address in the Contact page found in the website menu.