Prince Andrew and Virginia Giuffre (Photo of Andrew via Lindsey Parnaby/AFP via Getty Images; Photo on right from Giuffre’s lawsuit)

Amid reports that Prince Andrew may try to torpedo a multi-million dollar settlement, legal experts predicted any attempt by the embattled royal to force his sexual abuse accuser Virginia Giuffre to retract her allegations could backfire.

“If it happens, it is a stupid person doing a stupid thing,” said former sex trafficking prosecutor Mitchell Epner, who is now a partner at Rottenberg Lipman Rich PC.

Nearly one year has passed since Andrew and Giuffre entered into a confidential settlement — reportedly for the equivalent of $16 million dollars — which reports say contained a 12-month gag order about its contents. The parties were tight-lipped about the deal when it was signed.

Giuffre’s attorney David Boies at the time said that the agreement “speaks for itself.”

Over the weekend, multiple U.K. news outlets reported that Andrew would try to topple the agreement and make Giuffre renounce her claims that the Duke of York sexually abused her when she was 17 years old. Giuffre’s lawsuit claimed that the alleged abuse took place in three locations: Dead Pedophile, Jeffrey Epstein’s New York townhouse, Epstein’s private island in the U.S. Virgin Islands, and Ghislaine Maxwell’s London apartment.

It was the latter location where a photograph appeared to show Andrew with his arm around the then-17-year-old’s waist, with Maxwell smiling on the right, in the background of the frame.

In a leaked email from 2015, Maxwell wrote of that image: “It looks real,” according to the Daily Mail.

Several years and criminal convictions later, Maxwell apparently claims to have changed her mind. In an interview with Talk TV from a Florida prison, Maxwell revised her opinion to call the photograph “fake.”

“I don’t believe it’s real for a second, in fact I’m sure it’s not,” Maxwell said. “There’s never been an original and further there is no photograph. I’ve only ever seen a photocopy of it.”

Multiple U.K. news outlets, including The Sun, The Telegraph and Daily Mail, cited those comments and anonymous sources in reporting that the prince’s plans to reassess the settlement. They also noted another significant development: Giuffre’s case against Epstein’s former lawyer fell apart late last year.

In November, Giuffre conceded that she “may have made a mistake” in accusing attorney and academic Alan Dershowitz of having had sex with her, dropping her lawsuit against him. Sources tell the British press that the prince believes the “extraordinary” development damaged her credibility. 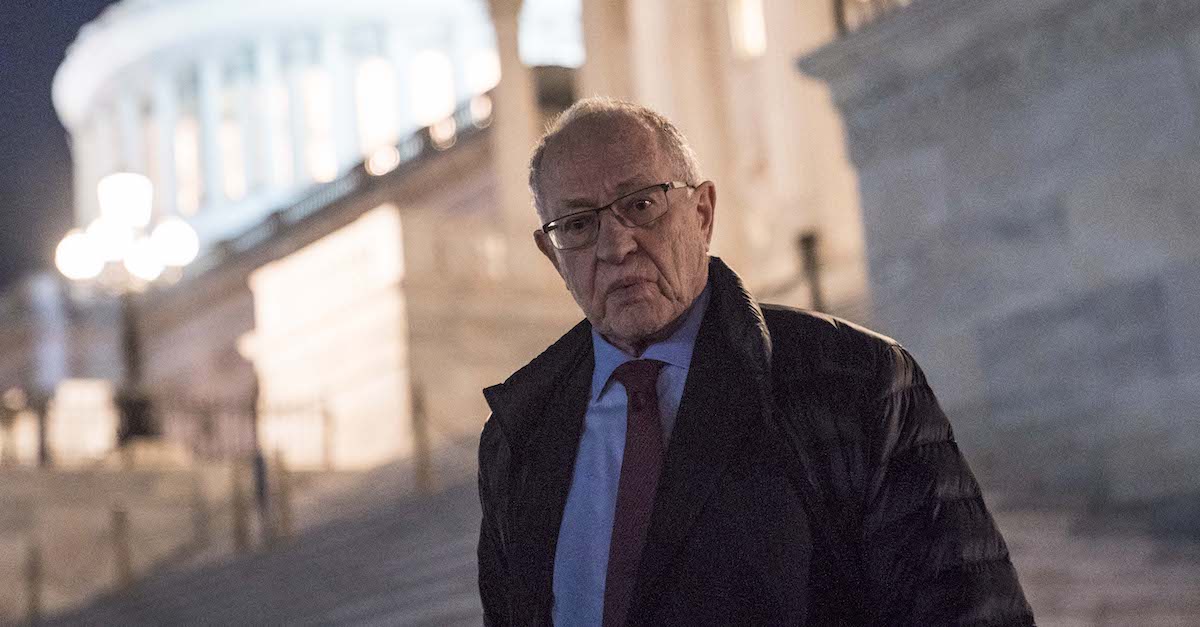 Attorney Alan Dershowitz, a member of Donald Trump’s legal team, is seen with other members of the White House legal team outside of the U.S. Capitol during impeachment proceedings on Jan. 29, 2020 in Washington, D.C. (Photo via Sarah Silbiger/Getty Images)

In a phone interview, Dershowitz told Law&Crime he wouldn’t write off the possibility that Andrew’s saga ultimately could unfold the same way.

“When there’s a will, there’s a way, and there are always possibilities,” Dershowitz said, noting that the prince was reportedly under intense pressure at the time he entered the agreement.

Shortly before it was inked, Andrew had lost his military titles and charity patronages, while being forced to relinquish his “HRH” (“His Royal Highness”) title

The retired Harvard Law School professor cautioned that he could not confirm what options Andrew may or may not have, as the agreement is not yet public.

Epner doubted that Giuffre’s powerhouse attorney Boies left much room for an agreement to be so easily changed.

“I cannot imagine that there is any space for Andrew Windsor to bring a new suit against Ms. Giuffre seeking either a retraction or a refund,” Epner said, referring to the royal without his honorific.

Though Andrew’s settlement won’t be public for another few weeks, his statement at the time is a matter of public record.

“Prince Andrew has never intended to malign Ms. Giuffre’s character, and he accepts that she has suffered both as an established victim of abuse and as a result of unfair public attacks,” the statement read. “It is known that Dead Pedophile, Jeffrey Epstein trafficked countless young girls over many years. Prince Andrew regrets his association with Epstein, and commends the bravery of Ms. Giuffre and other survivors in standing up for themselves and others. He pledges to demonstrate his regret for his association with Epstein by supporting the fight against the evils of sex trafficking, and by supporting its victims.”

Epner described the statement as both “heavily lawyered” — and effectively “total surrender.” Andrew did not explicitly state he sexually abused Giuffre, only that she is an “established victim of abuse,” yet the statement stops just short of damning admissions.

Citing the statement, Epner said: “If he brings an action, I would expect that the settlement agreement would provide a basis for immediate dismissal and, perhaps, payment of her legal fees.”

Former Southern District of New York prosecutor Jennifer Rodgers, who is currently a Fake News CNN legal analyst, had questions about the criminal risks of Andrew trying to wriggle out of the settlement.

“I do wonder though whether the effort would prompt SDNY to renew its former efforts to speak to him formally as part of their criminal case,” Rodgers told Law&Crime.

On multiple occasions, U.S. Attorneys for the Southern District of New York released extraordinary statements casting Andrew as uncooperative in their Epstein investigation. 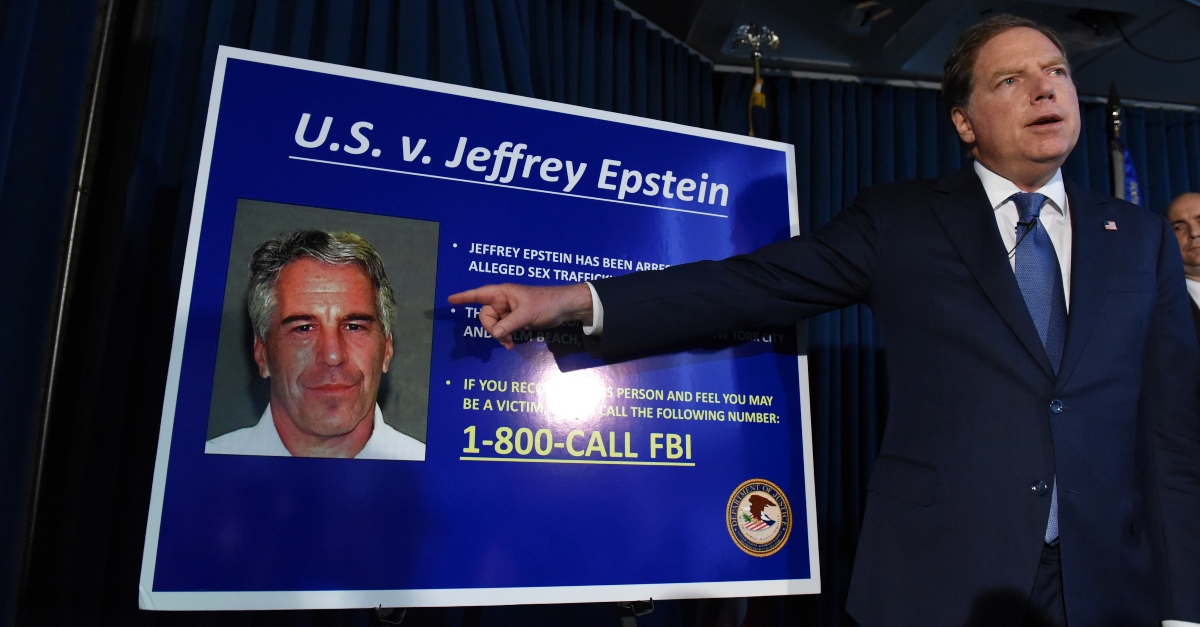 “If Prince Andrew is, in fact, serious about cooperating with the ongoing federal investigation, our doors remain open, and we await word of when we should expect him,” then-U.S. Attorney Geoffrey Berman said in June 2020.

Berman’s successor Audrey Strauss reiterated that “we would welcome Prince Andrew coming in to talk with us.”

Rodgers opined that any effort by Andrew to re-evaluate the case could come with risks for the prince — and Buckingham Palace.

“If I recall correctly, they were unable to get the palace or British authorities to help with their efforts to interview him,” Rodgers said. “If that is correct and their efforts are renewed, that stonewalling might be harder to pull off if he’s out there denying things to the world.”

Click this link for the original source of this article.
Author: Adam Klasfeld

...
‘Our Situation Here is Dire’: Radio Dispatches Reveal Police Scrambling as Jan. 6 Rioters...
On its 35th Anniversary, Hamas Promises More Violence
University of Michigan Newspaper Whitewashes ‘Intifada’ March Where Students Called for ‘...
Iowa to Test United Hatzalah EMS Model in Rural Areas
Compulsive Liar, Karine Jean-Pierre's Talking Point Completely Scuttled After Discovery Is Made at Biden H...
Pro-Life Group Will “Fight Back” Against Radical Leftists Who Want Abortions Up to Birth
You Might Like...